Let's Talk About the Ending of Star Wars: The Rise of Skywalker

Warning: This post contains major spoilers for Star Wars: The Rise of Skywalker.

When we first see Rey (Daisy Ridley) in Star Wars: The Rise of Skywalker, she’s in the midst of a Jedi training exercise that involves levitating while keeping a bunch of rocks floating in the air around her. She speaks into the ether: “Be with me.”

Nothing happens. But this, of course, will be important later on.

Over the course of the next two hours of director J.J. Abrams’ conclusion to the Star Wars sequel trilogy, we learn that the reason Rey is so naturally strong in the Force is because she isn’t nobody, after all—she’s the granddaughter of Emperor Palpatine (Ian McDiarmid) himself. Oh, and he’s still alive.

That’s right, Darth Sidious apparently managed to survive his fall down the Death Star’s reactor shaft in Return of the Jedi by using “unnatural” powers made possible by the Dark Side to cheat death. He’s also been the one pulling the strings behind the rise of the First Order and wants Kylo Ren (Adam Driver) to kill Rey to ensure she doesn’t get in the way of the almighty Final Order coming to power.

Palpatine has actually wanted Rey dead her entire life, but, as we learn in The Rise of Skywalker, she was saved by her parents hiding her away on Jakku to protect her. Despite the fact that both her mom and dad (Palpatine’s son) seem to have been good people, after learning the truth about her family tree, Rey becomes increasingly worried that her bloodline will be what determines her fate.

But thanks to some encouraging words from Luke’s Force ghost (Mark Hamill), she decides to head to the secret Sith planet of Exegol anyway for a final showdown with Star Wars‘ ultimate baddie.

And that’s where we’ll dive into talking about the ending of The Rise of Skywalker, the divisive final chapter in the long-running Skywalker saga that scraps much of the lore introduced in Rian Johnson’s The Last Jedi in favor of maintaining Star Wars’ natural order.

First off, let’s break down what that giant gathering of Sith ghosts was all about.

What’s the deal with the Sith?

In addition to growing Supreme Leader Snokes in a test tube and apparently refusing to get a manicure, Emperor Palpatine has been hanging out on Exegol with what seems to be the ghosts of every dead Sith Lord who ever lived. When Rey enters Palpatine’s fortress, we see these hooded figures gathered around the Sith throne in a setup that’s darkly reminiscent of the senate chamber scenes in the prequel trilogy, and man, there are a lot of them.

In fact, there are so many of them that you may be wondering where they all came from considering the Rule of Two—which dictates that only two Sith Lords, master and apprentice, can be living at the same time—has made it so only around 30 Sith Lords have existed in the thousand years since their order was established. But back to the action.

Palpatine starts trying to goad Rey into striking him down in anger (like he did with Luke in Return of the Jedi) and tells her that once she does, the power of every Sith that has ever lived (presumably all that are present in the chamber) will pass into her. Rey initially refuses, but when he reveals that the entire Resistance fleet will be destroyed if she doesn’t go through with it, she agrees.

But wait…Since we know Darth Vader didn’t inherit this all-consuming Sith power when he killed Palpatine the first time to save Luke, it must mean the process only works if the killing is done out of hate and anger. But Rey is doing this to save people she loves just like Vader did, so why would she inherit Palpatine’s power? Unclear.

What is a Force dyad?

While the Emperor and Rey have been verbally duking it out, Kylo Ren (now fully restored to his former Ben Solo self) has also arrived on Exegol and is desperately trying to get to Rey before it’s too late. Unfortunately, since he tossed his red cross lightsaber into the ocean, he’s caught without a weapon by the Knights of Ren. But not to worry, Rey senses his presence through the Force connection they’ve shared through all three movies and manages to sneakily teleport one of her two lightsabers (it’s unclear whether it’s Luke’s or Leia’s) to him before drawing her own on Palpatine.

Kylo defeats the Knights of Ren and joins Rey for a final stand against the Emperor, but he’s still too strong for them. Revealing that the bond they share hasn’t been seen in generations and is referred to as a Force dyad—a connection that unites two people who are strong in the Force and makes them more powerful together than they could ever be on their own—Palpatine begins siphoning their collective energy, restoring himself to a much healthier state.

Kylo manages to stand back up only for Palpatine to Force-lightning fling him into an abyss to end the Skywalker line once and for all, leaving only Rey to save the day.

How does Rey defeat Emperor Palpatine?

Remember Rey’s “Be with me” line from the beginning of the movie that we said would be important later? Here’s where it comes in.

As Palpatine continues to taunt her and fires on the Resistance fleet with his Force lightning, Rey looks up and calls on her Jedi ancestors to be with her. This time, they are, and hearing their voices gives Rey the strength to stand. The Emperor turns his Force lightning on her and she counters by crossing both lightsabers in front of her to deflect it.

Palpatine declares that he is every Sith and Rey responds with the Avengers: Endgame-style retort of, “And I am every Jedi,” before jettisoning his own lightning back at him, killing both him and herself in the process.

But wait! Turns out Kylo somehow survived his fall into the abyss and comes crawling out to transfer his remaining life force into her and bring her back from the beyond. (This is something you can apparently do with the Force now.) They share a kiss before Kylo, having redeemed himself, becomes one with the Force and disappears into thin air.

Is balance ultimately brought to the Force?

It seems safe to say that the entirety of the nine-episode Skywalker saga has centered on the idea of bringing balance to the Force. But did the ending of The Rise of Skywalker achieve that long sought-after goal?

In the prequel trilogy, we were introduced to the idea that Anakin was the “Chosen One” of Jedi prophecy who would “restore ultimate balance in the Force.” As we all know, Anakin was eventually seduced by the Dark Side and became Darth Vader before redeeming himself in his final moments by tossing Palpatine down the Death Star’s reactor shaft to save Luke, an act that some thought fulfilled the prophecy.

When the voices of Jedi past speak to Rey in The Rise of Skywalker, she hears Anakin (Hayden Christensen) telling her to bring balance back to the Force, implying that his sacrifice did in fact achieve that feat. But considering the First Order rose up less than 30 years after that, what was even the point? Will the peace last any longer this time? Is the galaxy destined to cycle endlessly through long bouts of war followed by much shorter reprieves?

According to Star Wars canon, bringing ultimate balance to the Force doesn’t mean that Light is victorious over Dark; it means that Light and Dark achieve equilibrium with neither side “winning.” This seems to imply that for every Jedi that rises, an equally powerful Sith will rise to meet them—which seems like it could be an issue considering Rey is a Jedi and there are no Sith left.

But while Rey’s allegiances clearly lie with the Light, perhaps the answer to this balance conundrum lies in the idea that she has learned to master her Dark impulses—as she does when facing off with the Sith version of herself on Exegol—rather than give into or refuse to acknowledge them.

If nothing else, judging by the gold-colored lightsaber that we see she’s chosen for herself at the end of the movie, Rey is apparently unlike any Jedi we’ve seen before. 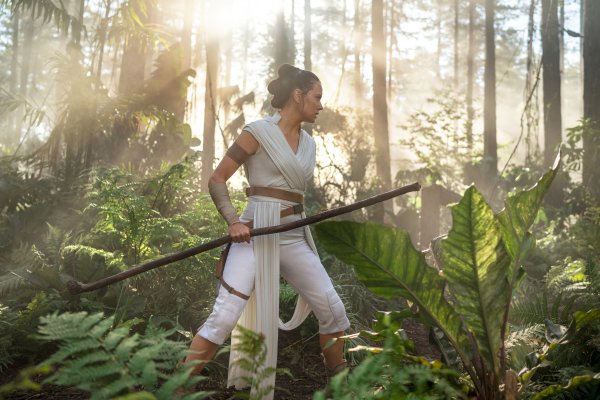 Breaking Down That Shocking Rey Reveal in Star Wars: The Rise of Skywalker
Next Up: Editor's Pick