Broad City is dead, but its spirit of metropolitan millennial best-friendship lives on in Tuca and Bertie, an animated comedy from BoJack Horseman producer and production designer Lisa Hanawalt. A voice cast led by Tiffany Haddish, Ali Wong and Steven Yeun adds star power to freewheeling stories whose manic energy and vibrant color palette will surely appeal to fans of Abbi and Ilana. It’s a fun show, but one that can sometimes feel a bit too derivative and desperate to harness the pop-feminist zeitgeist.

Like BoJack, Tuca and Bertie is populated by a bestiary of animals with humanoid bodies. (Small differences, from the predominance of birds to the existence of plant-headed people, distinguish the two worlds.) A bright blue, free-spirited toucan eking out a living in the gig economy, Haddish’s Tuca is the confident, outrageous, hypersexual Ilana of the pair. That makes Bertie (Wong) the Abbi, a neurotic everywoman songbird who’s forcing herself to lean in to her boring data analysis job at magazine publisher “Condé Nest” but dreaming of a more creative career as a pastry chef. After years as roommates, Tuca has just gotten her own place in the building so Bertie can cohabit with her bland architect boyfriend, Speckles (Yeun).

For two 30-year-olds in the city, this rite of passage should trigger the final stage of growing up, but that’s easier said than done. Tuca fights loneliness and struggles to make rent. Bertie’s anxiety threatens to sabotage her efforts at work; what should be domestic bliss with Speckles leaves her fantasizing about another man in her life. The friends know just how to soothe each other’s pain and compensate for each other’s flaws, which explains their symbiotic relationship.

Much of the time, their adventures are delightful. Even as a cartoon, Haddish nails every joke; one-liners like the insult Tuca hurls at a woman who’s rude in a public restroom —“You need to go back to toilet school!”—consistently kill. And Hanawalt’s kinetic animation makes a perfect canvas for surreal comedy: In an episode called “The Sex Bugs,” Tuca’s approach to self-medication transforms her STI into a gang of amorous, person-sized critters. When a coworker gropes her, Bertie’s breast pops right off her body, exclaiming, “I am done with today!” Now that every TV show has a #MeToo episode, the visual gag revitalizes a narrative that has started to seem obligatory.

Yet Tuca and Bertie puts so much emphasis on the kind of relatable moments that viewers love to screencap and share, it starts to feel pandering. Beyond sexual misconduct in the workplace, season one takes on impostor syndrome, self-care, mental illness, sober dating, fear of commitment and more. This obsession with relevance can detract from funnier, more imaginative takes on everyday struggles. An episode where Bertie joins a feminist group called Women Taking Up Space yields such banal breakthroughs as: “I deserve to be treated like a person and not an object!” The mismatched moods don’t entirely ruin the show’s fun. But for a project that looks so much like BoJack and borrows so much from Broad City—two comedies with very different but equally seamless approaches to tackling topical issues—that clunkiness is a bummer. 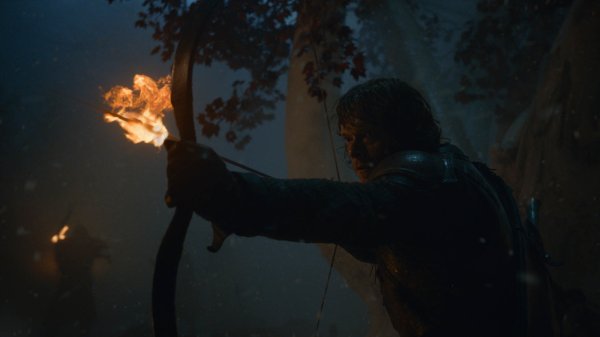 This Game of Thrones Moment Makes That Theon Scene Even More Meaningful Than You Thought
Next Up: Editor's Pick