How The OA Became Netflix’s Most Mysterious Show

I can’t really tell you much about The OA. Netflix has asked journalists to not reveal certain plot points before the second season of its mind-bending serialized drama premieres on March 22—but even if it hadn’t, there’s just so much about this show that remains so mysterious.

Like what I’m looking at, right now, in a small screening room on the eighth floor of Netflix’s Hollywood offices, seated next to its co-creator and star, Brit Marling. From our perch on a black leather couch, we watch this season’s dizzying seventh episode in its entirety. This is “QC,” or quality control—one last check to make sure every frame and cue is just as Marling wants it, the last step before it gets beamed onto television screens in millions of living rooms. After years of writing and starring in independent films, the reach of the streaming platform that distributes her vision remains bewitching to her. It’s something she brings up again and again: just how big it is, especially when the work, to her, is so intimate.

She turns to Blake Holland, who worked on the show with her, and shakes her head. “This is the power of group storytelling,” she says. In one scene, her character, who calls herself “the OA,” which stands for Original Angel, takes a bath and remembers being underwater in a traumatic childhood incident. They had tried many complicated visual effects to show the OA shifting from her present–day experience into memory, and eventually settled on just changing the color of the water to the blue that she remembers from her childhood. It’s a subtle but powerful trick. “It feels like the way you move through memory,” Marling says, satisfied.

She and her co-creator, Zal Batmanglij, exhaustively developed the world of the show before selling it, resulting in a multiple-network bidding war; it’s disorienting, now, to hear her talking offscreen about cuts and visual effects. They feel like such earthly concerns, while Marling, an ethereal presence in the role of a woman with divine gifts, seems so thoroughly not of this world. Neither is her show.

The first season of The OA opened with a tantalizing premise: A young woman, Prairie Johnson (Marling) returns home to her adoptive parents nearly a decade after disappearing. When she left home she was blind; now she can see. She rounds up a band of teenage boys from her neighborhood, along with a middle-aged teacher from their school and—like a suburban Scheherazade—tells them a tale over many nights of how, after a brush with death as a child, she spent years imprisoned in an under-ground bunker by a scientist obsessed with studying people who had survived near-death experiences. Eventually, she and her fellow captives discovered a series of kinetic movements, like a modern dance sequence, that, when performed together, could transport them to other dimensions.

If this sounds weird, well, it is. Viewers were divided on the show; some critics read it as another fantastical puzzle box for fans to solve, like Stranger Things or Westworld, and indeed, the show spawned endless -message-board threads unpacking its seemingly unsolvable plot. But The OA is earnest as it lays out its mythology, like it’s daring you to reconsider how much magic might be possible in the real world.

The second season takes more risks, picking up in the alternate reality that the OA and some of her friends have arrived in, and introducing a new mystery that pushes the show into noirish territory, threading the supernatural and the divine into an old-fashioned potboiler. It also features inter-dimensional travel, a mansion that drives people insane, a sinister augmented-reality video game and a giant talking octopus. The first time I watched the episode with the octopus, I didn’t get it. The second time, I still didn’t get it, but the sight of that octopus made me burst into tears for reasons I couldn’t entirely explain.

In the airy Silver Lake writers’ room where Marling and Batmanglij sit for an interview, there are sheets of fabric covering whiteboards where the two have done a post-mortem recap of the second season, which I’m not supposed to see. “Before it reaches the world, we ask: What were the risks we took that landed, and which ones didn’t?” Marling tells me.

“It’s never the ideas themselves,” Batmanglij says. “They exist in some other space, and they’re perfect. But sometimes in the translation of the ideas, there’s a lack of clarity.” That’s what they’re trying to identify, in what Batmanglij calls the “unpasteurized” space before the show comes out and hordes of fans and critics start reacting to it.

Batmanglij and Marling met at Georgetown University, where they both studied. They went on to work together on well-received independent films including Sound of My Voice and The East—both written together, starring Marling and directed by Batmanglij. Their work is at turns dreamlike and anxious, particularly about the ways in which magnetic people wield influence.

The second season of The OA turns that lens on Silicon Valley, home to so many tech lions who have been credited with changing the world. One key story line involves a tech mogul (played by Mad Men’s Vincent Kartheiser) who has possibly nefarious aims.

“Have you seen those photos from the ’40s where people are smoking in a movie theater?” Batmanglij asks. “I think that’s how we’re going to look back at this era. In every public space, everyone has their head down on their phone. Including me.”

As they conceived of the second season, they were fascinated by San Francisco. “It’s the epicenter of technology, and has been since the Gold Rush, but it’s also a peninsula surrounded by water and huge old-growth trees,” Marling says. “We liked the idea of a narrative in which we were inside both those spaces and absorbing both of their intelligences.”

This tension—between the new and the ancient, the synthetic and the natural, the earthly and the divine—is in the DNA of the show. In the first season, a scientist was studying people who believed, rightly or not, that they had supernatural abilities; in this season, tech plutocrats may be trying to exploit them. Marling tells me she read about Maasai warriors in Africa who, when separated, would dream of one another in a particular geographical location, then wake up, start walking and eventually find each other there. “Why don’t we believe in that, but we believe in texting?” she asks. “Why do most of us hear that, cross our arms and say, ‘Ah, but did they really? Was there a white male scientist with them? How was this measured?’ We want empirical proof, and yet we send each other 1s and 0s through space all day and we just believe.”

As an Angeleno who has a collection of crystals and has visited more than one energy healer, this line of thought resonates with me—but it turns out my personal views might be wackier than either of theirs. “A lot of people dub our work as New Age,” Batmanglij says. “But for some reason, they don’t dub Stan Lee’s work that way. I don’t understand how our story can be so bonkers, but Captain Marvel isn’t. A lot of the ideas in The OA that seem outlandish are just normalizing as the years go by.”

“It only scares us,” Marling says, “because we are shamed into accepting that the only valuable intelligence is that of the Excel spreadsheet.”

Back at Netflix, as we are leaving the screening, Marling and I start chatting-—it’s meant to be just a few minutes, before we go across town to the writers’ room—but we end up talking for nearly an hour: about the development process; about how streaming services have upended the parameters of genre and form that have defined film and television for decades; about how the first season was about how trauma lives in the body; about the way science and spirituality sometimes seem like different vocabularies to describe the same phenomena; about why her show’s radical sincerity made it such a polarizing viewing experience; and about all the things that her show both does and does not say. This conversation doesn’t feel like an interview. It feels forensic: like two people interrogating why a thing works the way it does, even though she’s the one who created it and all I did was watch it. I want to understand her intentions in making this show—about what she was trying to say. But Marling insists that I have it backward: the more she told this story, the more the story had to say to her. It was more like receiving the story than anything else, she says. I believe her.

I record that conversation on my phone. But when I get home, I can’t open the audio file; it just won’t play. I try moving it onto my computer. I try to convert it, to edit it. Nothing works.

You could say my phone just glitched, and maybe it did. But to me it feels like there were other, invisible forces at play—like the purpose of that conversation was for us to really see each other, not for me to write an article. I know that sounds New Age. But Mercury’s in retrograde. Some mysteries aren’t meant to be solved. 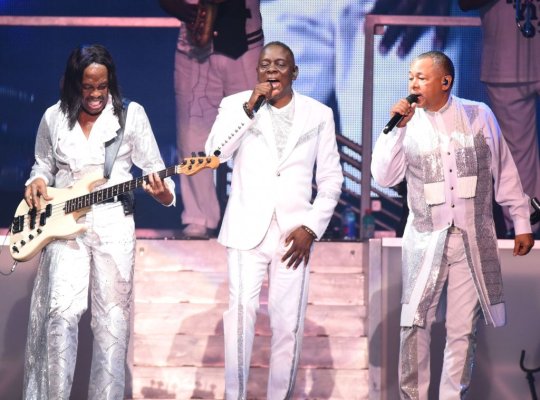 These 25 Songs Were Just Added to the National Recording Registry
Next Up: Editor's Pick