'I Never Wanted to Be a Dissident.' A Gay Saudi Journalist Seeking Asylum in Australia Speaks Out After Being Detained

Two weeks before a Saudi assassination team murdered dissident journalist Jamal Khashoggi in Istanbul in October 2018, Saudi Arabia’s state security agency summoned Sultan, then a 46-year-old senior official at the Saudi Ministry of Media, to a prison on the outskirts of Riyadh.

Sultan, who asked TIME to use a pseudonym to protect his identity out of fear for his safety, says he was taken to a cell with a CCTV camera angled towards the ceiling, where an interrogator accused him of helping a foreign journalist meet Saudi dissidents, and hinted he would out him as gay should he continue to work with the foreign press.

Sultan was indeed in a relationship with another man, something he had kept secret for over a decade. After he and Nassar (also a pseudonym) began living together a few years ago, the pair moved apartment every six months to avoid attracting attention. Homosexuality is a crime in Saudi Arabia and can carry the death penalty.

A year after Khashoggi’s murder, Sultan once again found himself in detention—but this time in Australia. He and Nassar, a cameraman, traveled there in October to seek asylum after receiving death threats from Nassar’s relatives, who said they had received information that his relationship with Sultan did “not please God.” Those threats were followed by a police summons for both men on unspecified charges. The pair decided to flee the country, arriving in Australia on tourist visas before being taken into detention.

Their asylum case—which prompted messages of support from several prominent international media organizations, as well as an advocacy campaign from Australia’s LGBT community— is a stark reminder that despite hosting its first ever media forum in Riyadh this month, Saudi Arabia remains dangerous for those perceived as critical of its leadership, and a prohibitive place for LGBT people.

Sultan believes Saudi authorities leaked information about their relationship to Nassar’s relatives out of suspicion Sultan had continued to work with the foreign press. “The interrogator said, ‘look, it’s obvious to me what’s going on. You have secrets. But secrets don’t have to remain secrets forever,’” Sultan told TIME by phone from Sydney’s Villawood Immigration Detention Center on Dec. 6, 11 days before he was released. “I asked what’s the point of all of this. He said: ‘We need you to stop working with the foreign media.’”

Sultan traces his trouble with Saudi authorities back to March 2018, when he granted Canadian journalist Marie-Eve Bedard a visa to visit the Kingdom. In Jeddah, the reporter met with prominent activists Samar Badawi and Zuhair Kutbi; the latter gave her documents detailing torture and human rights abuses in the Kingdom’s prisons, Sultan says. TIME could not independently confirm whether Bedard met activists in Saudi Arabia or how she used the information she is said to have received. Sultan denies facilitating their meeting.

That July, Saudi Arabia detained Badawi, among other activists accused of offenses including “suspicious contact with foreign parties.” (Kutbi has been imprisoned since January 2019, according to the Committee to Protect Journalists.) The next month, Canada’s Foreign Minister criticized the Kingdom over Badawi’s arrest and Saudi Arabia expelled Canada’s ambassador. The diplomatic spat cast a pall over Crown Prince Mohammed bin Salman’s bid to portray himself as modernizing reformer.

Sultan was interrogated in September over his role in arranging Bedard’s itinerary. The same month, he says he was demoted from his position at the Ministry of Media. His salary was then delayed for the following months and he resigned at the end of December. He says he was invited to apply for jobs at the Royal Court and Ministry of Foreign Affairs but was rejected after passing panel interviews at each. Then he was denied a commercial registration license to open a production company. Saudi Arabia’s Ministry of Media did not respond to TIME’s request for comment on his case.

Sultan says that throughout, he continued to receive calls and emails from international journalists keen to work with him. He declined their offers but occasionally connected them with producers he thought could help. That, he believes, crossed a red line for the Saudi government and precipitated the exposure of his relationship with Nassar.

In Australia, the couple has now been released from detention after Australia’s Senate passed a resolution on Dec. 4, forcing the government to recognize that its detention of Sultan and Nasar at Villawood had placed them at increased risk. (Highlighting the dangers faced by asylum seekers, Amnesty International said that about three-quarters of some 485 individuals detained at Villawood are criminal deportees, or others who have had their visas canceled for character reasons.) Nassar was released on Friday Dec. 13, and Sultan was released four days later.

In an interview 11 days before he was released, Sultan detailed the circumstances that forced him to flee Saudi Arabia, and provided an insider account of how the ascent of Crown Prince Mohammed bin Salman has shifted red lines for journalists and activists working in the Kingdom. The interview has been edited for length and clarity.

TIME: You had assisted visiting international news organizations in Saudi Arabia for years. How did you come to be employed at the Ministry of Media?

Sultan: In 2017, I was approached by the Minister of Media. He asked me to do for him what I had been doing up until that point: working with the foreign media to help manage the Kingdom’s reputation abroad. I told him I did not want to be part of the propaganda machine but he said that he only wanted me to ensure fair and accurate reporting about Saudi Arabia. That sounded like a good deal and I accepted. Part of my official role was to grant visas to foreign journalists, study the reporting they’d done in the past, and determine how to best get them to report fairly and accurately. I love my country and I loved the challenge of trying to help people understand our culture. Our government is difficult to understand but our culture is a good one.

Were you aware during your career as a field producer, of red lines journalists covering Saudi Arabia should not cross?

Even with the religious police and the hard-line clerics, we had gotten used to how Saudi Arabia worked, and we knew how to operate in it. It was never completely clear but up until about 2017, there was a sense of where the red lines were. You did not attack the ultra-conservative religious establishment. You did not attack the royal family. And you did not attack any princes or high-power people by name. If reporters wanted to do a story about a company official accused of corruption, for example, there was a certain person in the Ministry of Interior I would call and ask whether it was going to be a problem. They would say: steer them away from this person, or that’s fine, go ahead.

How did the media environment change after Mohammed bin Salman became Saudi Arabia’s de-facto leader in 2017, the year you began working for the state?

The Kingdom was changing in ways that no one had expected — ways that were very positive. People who were known to be corrupt, who had stolen billions from the country, were suddenly being arrested. Women’s rights were at the forefront, and the changes that Loujain al-Hathloul and other people who were considered dissidents were fighting for were starting to happen. The religious police, which most liberal people like me detested, had their powers taken away and suddenly the press were criticizing ultra-conservatives, saying they’d oppressed the country since 1979. It felt like a lot of the red lines were being lifted; that was cause to celebrate.

At the same time, there were crackdowns against human rights activists and writers. Were you aware of the rationale behind those arrests at the time?

People like Loujain al-Hathloul and Eman Al Nafjan were suddenly being arrested. A whole bunch of writers were arrested and we didn’t know the reason. People have surmised that the government didn’t want dissidents getting credit for the changes that were happening, but it was never put out in the public domain. I felt somewhat protected because of my position at the Ministry of Media. I thought I could guide the foreign media through the changes and figure out where the new red lines were. But to end up being pulled out in such a horrible way and threatened that they are going to out my partner and I to our families and put our lives in danger made me realize I no longer knew Saudi Arabia. I never wanted to be a dissident. I love my country and I support the positive changes that Saudi Arabia is going through. But arresting journalists, throwing people in jail without any explanation or trial, is a very alarming development.

Why is the press being muzzled at a time Saudi Arabia is attempting to move towards a more open society? Aren’t those two things in contradiction?

Let’s not forget that Saudi Arabia is an ultra-conservative country. The majority of people are against the General Entertainment Authority. These are people that want to have nothing to do with Mariah Carey or Nicki Minaj [who in July pulled out of a planned performance in Jeddah, citing her support for LGBT people and free expression]; these are people that want the religious police back; these are people that want to be able to control their women. The changes [Bin Salman] is making are the kind that could lead to a revolution and I think the government is afraid there’s going to be civil unrest. By controlling the media, by arresting a lot of people, they’re showing that anyone speaking up against the changes is going to be silenced. But a successful government is one that allows people to speak their minds and discusses the dissent so that it’s no longer dissent.

In a November crackdown, Saudi authorities reportedly arrested at least seven more journalists. But in December, the Saudi Journalists Association, which says it is a civil society organization, hosted a forum in Riyadh discussing things like the relationship between the media and democracy. Has anything changed since Khashoggi’s murder?

There’s no such thing as independent media in Saudi Arabia. Everybody watches what they say. This [media forum] seems like a PR stunt to alleviate some of the pressure because a lot of people have lost face. One thing that could be a positive step is that since Jamal’s killing Saudi Arabia has put media relations under the Royal Court and established a whole new team of young men and women to help foreign press get certain interviews. But you’re not going to find anybody in Saudi Arabia writing anything negative about the Kingdom. And if the person does write something, he’s going to end up in the same place as those people who were just arrested. Had I still been there, I’m sure my name would have been among them.

How did your two months of detention fit with the conditions you expected as an asylum seeker?

Before coming here I had read about offshore detention centers where people would be held for months and years until their asylum claims are processed. But those are people that attempted to come to Australia by boat; we came with visas. Villawood is a multi-million dollar facility and it does not look like a prison but for us to come here in handcuffs and to be put in an environment with people that are using crystal meth, it was very intimidating. Although I’ve been threatened, intimidated and bullied in Saudi Arabia, I was never thrown in a jail cell without charge. That didn’t happen to us until we came to Australia. 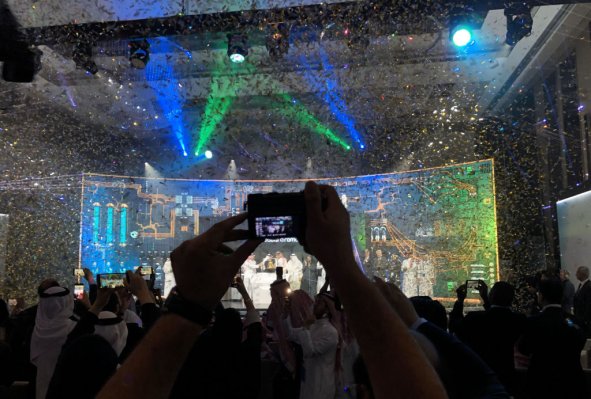 Saudi Aramco Is the World's First $2 Trillion Company. But Is It Overvalued?
Next Up: Editor's Pick