A United Nations special report has found “credible evidence” warranting further investigation of Saudi Crown Prince Mohammed bin Salman for his role in the killing of journalist Jamal Khashoggi last year — a conclusion that follows a five-month investigation into what the U.N. special rapporteur called a “deliberate, premeditated execution.”

In the 98-page report, released Wednesday, U.N. Special Rapporteur Agnes Callamard called for bin Salman, often referred to by the initials MBS, and other top Saudi officials to be investigated for their role and asked the United Nations to demand a criminal investigation into Khashoggi’s killing, citing an “insufficient” response thus far from Saudi Arabia.

She said “there is no reason why sanctions should not be applied against the Crown Prince and his personal assets.”

“Indeed, this human rights inquiry has shown that there is sufficient credible evidence regarding the responsibility of the Crown Prince demanding further investigation,” she wrote.

Khashoggi, who was a Washington Post columnist and a vocal critic of bin Salman, was killed and dismembered in October 2018 inside the Saudi consulate in Istanbul.

“It is the conclusion of the Special Rapporteur that Mr. Khashoggi has been the victim of a deliberate, premeditated execution, an extrajudicial killing for which the state of Saudi Arabia is responsible under international human rights law,” Callamard wrote.

Callamard was provided with select recordings of conversations inside the consulate, including a recording of Khashoggi death on Oct. 2, 2018. Before Khashoggi arrived at the consulate, one of the Saudi officials can be heard asking whether “the sacrificial animal” had arrived, the U.N. report said. The recordings later captured sounds of a struggle between Khashoggi and officials.

“Assessments of the recordings by intelligence officers in Turkey and other countries suggest that Mr. Khashoggi could have been injected with a sedative and then suffocated using a plastic bag,” the report stated.

While 11 suspects have faced trial in Saudi Arabia, Callamard found that some members of the 15-person team involved in Khashoggi’s killing have not been charged.

The report does not offer a definitive conclusion about bin Salman’s role, but Callamard highlighted the Crown Prince’s campaign against political opponents and dissidents, and noted that “every expert consulted finds it inconceivable that an operation of this scale could be implemented without the Crown Prince being aware, at a minimum, that some sort of mission of a criminal nature, directed at Mr. Khashoggi, was being launched.”

While the United States has sanctioned 16 Saudis over the killing, the Trump Administration has faced criticism for maintaining a close relationship with Saudi Arabia, despite earlier conclusions by U.S. intelligence officials that bin Salman ordered Khashoggi’s death.

Khashoggi was among four journalists and one news organization named as TIME Person of the Year in 2018, for “taking great risks in pursuit of greater truths, for the imperfect but essential quest for facts that are central to civil discourse, for speaking up and for speaking out.”

During the past few months, Khashoggi has consistently appeared on a list of the 10 Most Urgent cases of press freedom violations around the world, due to the lack of justice over his death. The list is published monthly by the One Free Press Coalition, founded this year by a group of leading news organizations, including TIME, with the goal of standing up for journalists under attack for pursuing the truth. 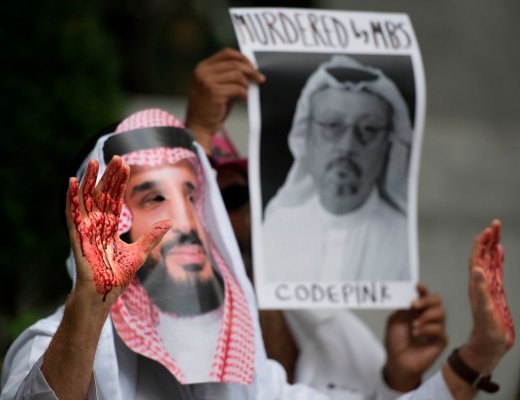 U.S. Shared Nuclear Info With Saudi After Khashoggi Murder
Next Up: Editor's Pick