Jamal Khashoggi Murder: One Year Later What Has Changed

TOPSHOT - A demonstrator holds a poster picturing Saudi journalist Jamal Khashoggi and a lightened candle during a gathering outside the Saudi Arabia consulate in Istanbul, on October 25, 2018. - Jamal Khashoggi, a Washington Post contributor, was killed on October 2, 2018 after a visit to the Saudi consulate in Istanbul to obtain paperwork before marrying his Turkish fiancee. (Photo by Yasin AKGUL / AFP) (Photo credit should read YASIN AKGUL/AFP/Getty Images)
Yasin Akgul— AFP/Getty Images
Ideas
By Ian Bremmer
Bremmer is a foreign affairs columnist and editor-at-large at TIME. He is the president of Eurasia Group, a political-risk consultancy, and GZERO Media, a company dedicated to providing intelligent and engaging coverage of international affairs. He teaches applied geopolitics at Columbia University’s School of International and Public Affairs and his most recent book is The Power of Crisis

This week marks the one-year anniversary of the brutal killing of Saudi journalist Jamal Khashoggi in the Saudi consulate in Istanbul. It’s worth looking back to survey the fallout for Saudi Arabia and the world.

As journalists face increasing danger worldwide in a polarized political climate—fueled by a fractured media landscape where everyone is able to cocoon themselves within their preferred viewpoints and vilify all others—the Khashoggi killing stands out as the most brazen contemporary attempt to silence a prominent government critic and to blunt further dissent. It’s also a criminal act that came complete with Turkish intelligence recordings, leading the US intelligence community to determine that Saudi Crown Prince Mohammed bin Salman (MbS) ordered the murder.

But despite the evidence, the Saudis are back in good international standing, and it didn’t even take that long. At last year’s Future Investment Initiative conference (informally dubbed “Davos in the Desert”, much to the World Economic Forum’s chagrin) that took place less than a month after the killing, many international CEOs opted not to show up out of PR concerns but still sent their number 2’s, and business has continued as usual. While there were some awkward moments at the first G20 summit in Buenos Aires following the murder, by the time of this year’s G20 in Osaka, MbS had been welcomed back into the fold. For supporters of press freedom and human rights, that’s equal parts disturbing and disheartening. For most, it’s the world we live in.

While Saudi Arabia’s government relationships and business interests have remained largely intact over the last year, the country’s reputation—and the reputation of MbS, once vaunted as a new kind of Middle East leader—has taken a hit, and has led to criticism from US lawmakers from both sides of the aisle. That helps explain why MbS recently told 60 Minutes, when asked point-blank if he ordered the killing of his most high-profile critic: “Absolutely not. This was a heinous crime. But I take full responsibility as a leader in Saudi Arabia, especially since it was committed by individuals working for the Saudi government.”

Factoring into this skin-deep mea culpa is that Riyadh is hosting next year’s G20 Summit, and the last thing MbS needs is a boycott of the event by any of the world’s largest economies (and the foreign investment they can bring) because he failed to show appropriate contrition, especially when it doesn’t cost him a thing to do so.

But Saudi Arabia’s current problems can’t be solved by handwringing alone. Iran is at the top of the list—the decision to strike Saudi oil production facilities has been the most brash move Tehran has made since President Donald Trump walked away from the Iran nuclear deal. And given long-standing hostilities between Iran and Saudi Arabia, Riyadh is on the frontlines of those escalating hostilities, and the muted response from the US to the attack didn’t help. Donald Trump, maybe the single greatest friend the Saudis have ever had occupy the Oval Office, is preparing for the political fight of his life as impeachment proceedings kick into high gear. And the Saudi Vision 2030 plan to rewire the economy for the 21st century has failed to take off as hoped, meaning Saudi Arabia remains a petrostate in a world increasingly moving away from fossil fuels. Just this week, Fitch downgraded the country’s credit rating. In other words, plenty of problems piling up for the kingdom. Coupled with the passing of time, the Khashoggi murder becomes less and less of an issue, both for Riyadh and the rest of the world.

The Key Fact To Know About It:

24%: Less than a quarter of the countries of the world are deemed to be “good” or “fairly good” environments for journalists to work in according to Reporters Without Borders, down from 26% in 2018. For reference, Saudi Arabia clocks in at 172nd (out of 180) on this year’s list after having fallen three spots.

The perpetrators “wanted him to disappear but his image and his voice are chasing them everywhere.” –Wadah Khanfar, former director of Al Jazeera. True… the Saudis just don’t care. And neither do most governments and businesses dealing with the Kingdom. 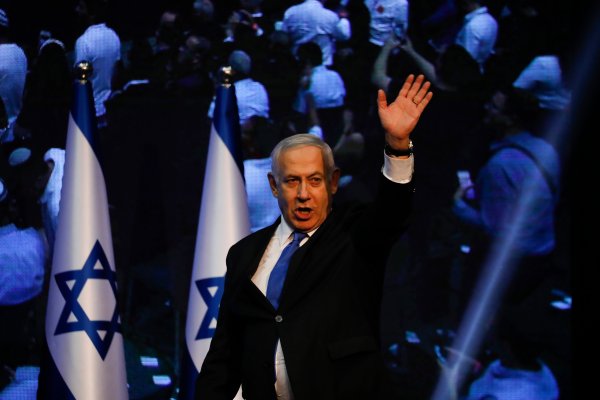 What Will Happen in Israel After the Vote
Next Up: Editor's Pick