A Comprehensive Guide to Billy Porter's Best and Most Outrageous Looks

Standing out on an awards show red carpet surrounded by Hollywood swanning in their finest looks is no easy feat, but Billy Porter somehow manages to do so deftly and consistently. The Pose star and longtime Broadway veteran has become the MVP of sensational red carpet fashion of late, effectively stealing the show during the awards show circuit.

Take for example his elegant look for the 2019 Oscars, a velvet Tuxedo jacket paired with a sweeping, magnificent ballgown from designer Christian Siriano — the look generated as much buzz as the winners of Hollywood’s biggest night and opened up thoughtful conversations about gender and identity. Or consider the striking entrance Porter made while attending the 2019 Met Gala, where he, resplendent in a gold The Blonds bodysuit inspired by Diana Ross and the Egyptian sun god Ra, was carried into the coveted fashion ball on a golden palanquin carried by six shirtless men.

All of which to say is that whenever there’s a red carpet, Porter always delivers, making the compelling case that serving looks for a red carpet event can be just as much fun (if not more) than the actual event itself. Ahead of this awards season, here’s a look back at Porter’s most memorable and outrageous looks.

Porter came through with the gilded-looking gold leaves again, holding court in a voluminous skirt that ensured a grand entrance at the 92nd Academy Awards. Talk about channeling a mythical bird. Thank goodness the footwear could still be revealed.

For the 2020 Grammys, he wore a disco bejeweled jumpsuit topped off with a confrontation repellant hat that boasted a lampshade crystal fringe effect, a custom job by Sokol Millinery with engineering from Sm00th Tech with a little help from a microcontroller, as Sm00th’s co-founder and engineer Dave Sheinkopf explained to TIME. (He worked with his collaborator, stylist Sam Ratelle who held the clicker that controlled the hat’s wow factor.) Casual! “You must wear the clothes, the clothes must not wear you. That’s a theater thing – you have to become the character or else you ain’t no good!” Porter recently told TIME of his red carpet fashion statements.

Porter cut an angelic figure in a dazzling white custom Alex Vinash gown at the 2020 Golden Globes, a look that he described as fitting for the category of “Blaque Swan” on his Instagram.

Porter’s dapper custom suit and cape were hand-embroidered and took six months to prepare ahead of the 2019 Golden Globes.

Billy Porter attends the 2019 Met Gala celebrating "Camp: Notes on Fashion" at The Metropolitan Museum of Art on May 6, 2019 in New York City.
Taylor Hill—FilmMagic/Getty Images

Porter’s gender-fluid evening suit, which featured a sweeping train and 30,000 Swarovski crystals, was made out of upcycled curtains from the Broadway production of Kinky Boots, the show that Porter earned a Tony for in 2013. Porter selected the uterus-esque look to center the current conversations about reproductive rights in America.

Porter’s Celestino Couture gown for the 2019 Peabody Awards was made of upcycled materials for a striking and sustainable look.

Porter’s matador-inspired look featured a bolero jacket and a sweeping ruffled overskirt that took two and a half months to create.

Porter turned to his Oscars collaborator Christian Siriano for this tulle rainbow gown he sported for WorldPride in NYC.

As the star of The Blonds’ Moulin Rouge! New York Fashion Week performance, Porter wore a dazzling white custom look by them.

Porter donned a voluminous Roksanda frock for the label’s Spring/Summer 2020 show in London.

Porter made pinstripes glam with his jewel-embellished Michael Kors suit and a sweeping Stephen Jones hat. 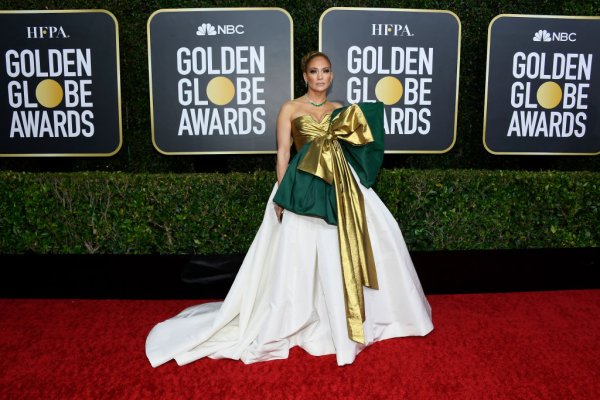 Jennifer Lopez's Best and Most Outrageous Red Carpet Looks
Next Up: Editor's Pick