When it comes to red carpet fashion, you’d be hard-pressed to find someone who can make an entrance like the inimitable Billy Porter, who in the past year alone, has shown up to the 2019 Oscars in an elegant tuxedo and ballgown skirt combo and was carried in on a golden litter, dressed as the Sun God, to the 2019 Met Gala.

So perhaps it should come as no surprise that Porter chose to have another moment with a message when he showed up to the 2019 Tonys red carpet, attired in a show-stopping red velvet and pink tulle look with an embroidered uterus motif that he selected to support women’s reproductive rights amid the current political upheaval about the issue.

The dramatic look, a custom Celestino Couture gender-fluid evening suit, featured a sweeping train and 30,000 Swarovski crystals. The suit also held special meaning for Porter because it was made of an upcycled curtain backdrop from the Broadway production of Kinky Boots, which Porter won a Tony for best actor in 2013; the musical’s Broadway run ended this April after an impressive 2,507 shows.

In an interview with The Hollywood Reporter, Porter shared that his Elizabethan fashion-inspired red carpet look for the night was motivated by current anti-abortion legislation.

“At the fitting, we spoke about making a pattern on the train that was in the shape of a uterus, but not obvious, of course. And I thought it was awesome because women’s rights are under attack right now,” Porter said. “I’m an advocate for all who are disenfranchised. None of us are free until we’re all free! I really want to make sure that I’m showing up for all of the disenfranchised people I can so that we can find power in our unity. This government is trying to take away the woman’s right to choose and that’s unacceptable. No!”

See Porter’s red carpet look with a message below. 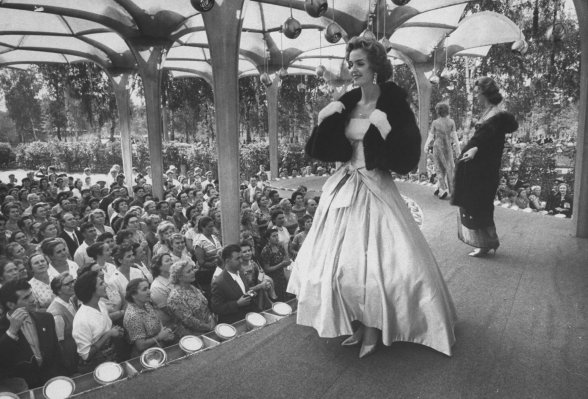 How a 1959 American Fashion Exhibition Changed the Soviet Union
Next Up: Editor's Pick