'You Must Wear the Clothes. The Clothes Must Not Wear You.' Let Billy Porter and His Stylist Explain the Story Behind His Buzzy Fashion Statements

It’s not easy to snag the spotlight on a red carpet, let alone at the Golden Globes, the show that kicks off awards season every year, but all eyes were on Billy Porter at the 77th annual Golden Globe Awards, when the Pose star and Broadway veteran took to the red carpet wearing an angelic white suit and gown with a sweeping feathered train.

The stunning look was just one of many over the course of a little over a year in which Porter redefined what red carpet fashion can and should be, from being carried in by six shirtless men on a golden litter, resplendent in a gilded bodysuit by The Blonds, at the annual Met Gala to wearing a magnificent black velvet Christian Siriano gown with a matching tuxedo jacket at the 2019 Oscars, which promptly went viral and became the catalyst for many a conversation about gender norms and self-expression.

Billy Porter attends the 2019 Met Gala celebrating "Camp: Notes on Fashion" at The Metropolitan Museum of Art on May 6, 2019 in New York City.
Taylor Hill—FilmMagic/Getty Images

While the looks may vary from sharp, candy-colored suiting to genderfluid, diaphonous frocks, one theme remains the same: Porter wears what he wants and he wears it extremely well. The fact that Porter’s dynamic personality and charisma might even outshine his eye-catching looks is a feat in and of itself and speaks to why his sense of style has resonated with a wide range of fans.

The idea of fashion as theater (or theater as fashion) is a sentiment shared by Sam Ratelle, who’s the stylist behind creating Porter’s memorable red carpet moments.

“Billy and I both come from the theater community, so this is costume design for me on the highest scale,” Ratelle tells TIME. “The red carpet is pretty much a stage, it’s theater. It’s just a different stage and a different way of expressing yourself. Billy allowing me to direct him is just such a gift because he’s so open and willing to do so many things, so for me, that’s really a joy.”

For Porter and Ratelle, creating a red carpet look is highly collaborative, with the two of them working closely with a designer to produce a look that’s unique and fitting for both theme and purpose of the event. Since many of Porter’s looks are custom-made, the process can take anywhere from one week (Porter’s custom Christian Siriano gown took one week to make ahead of the 2019 Oscars) to six months (the amount of time it took for his custom Randi Rahm embroidered suit and matching cape for the 2019 Golden Globes). While this might seem like a challenge, it’s one that Porter and Ratelle are eager to tackle. Both are of the mind that fashion is a vehicle to empower not just the wearer, but everyone watching.

Porter, who grew up loving fashion due to his church outfits and a grandmother who was a seamstress, said he’s always viewed fashion as political due to his upbringing.

“Being a product of the first generation, post-Civil rights movement, as black people, it’s always about first impressions and the first impression that people make of you is what you look like, so it was always political in that way for me,” Porter said. “I’ve just carried that throughout the years; so if me wearing a suit creates a particular response, what will me in a dress create, response-wise? That’s the first thing that people see. So the judgment or the conversation comes from that first impression, that’s why I made the choice and the decision to really use fashion as a way to talk about stuff.”

Porter’s not shying away from starting the conversations either; he openly discusses why he’s challenging gender norms with his clothing choices and encourages others to embrace living life boldly on their terms, especially when it means wearing what makes them feel good.

“I think the world is ready for a different conversation surrounding gender and what we can and cannot wear,” he said. “You know, it’s like men have been wearing dresses, if we’re going to call it that, since the beginning of time, you go back to the Greeks. Jesus wore a robe! There were in robes, we call them robes, but it’s the same thing – it’s a dress. So what’s the problem? Why is it a problem?”

Porter, whose latest film Like a Boss hits theaters this February and will be appearing next in a Cinderella adaptation, isn’t just using his personal style to blur gender lines, however; he’s got his eyes on reckoning with the structural implications too.

“It used to be a problem for women to wear pants and we got over that because that’s about the patriarchy,” Porter said. “When a woman wears pants, she’s strong; being strong and powerful – that’s a good thing. But you put on a dress and that’s whimsical, that’s weak, that’s feminine.”

Porter’s fearless self-expression has been a catalyst for Ratelle both professionally and personally. As he puts it, Porter’s creativity and sense of freedom embody all the possibilities that fashion can hold.

“No one every made me feel comfortable like that, I didn’t grow up with that kind of representation. He’s teaching me to be more fearless about what I put on my body and how I act and speak, really allowing me the courage to be myself and it’s coming from clothing and I think that’s really special.”

For Ratelle, styling Porter is an opportunity to center inclusivity, something he’s passionate about.

“For somebody like Billy, who’s so political and so vocal about what he really believes in to use this as a vehicle to express who he is and express his ideas and viewpoints on life and politics and culture, is really wonderful and life-changing — not only for him, but for a lot of people. Doing it in such a public way really allows opportunities for perceptions to change and I think we can’t change the world unless we start having conversations.”

It looks like there will be plenty more red carpets for him to continue being his truest self. 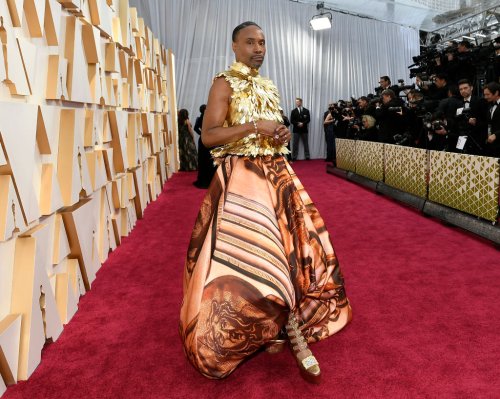 A Comprehensive Guide to Billy Porter's Best and Most Outrageous Looks
Next Up: Editor's Pick