Dolemite Is My Name, starring Eddie Murphy as real-life comedian, proto-rapper and Blaxploitation star Rudy Ray Moore, is one of the great movies about entrepreneurship, a story about making something happen even when everyone tells you it’s impossible. More specifically, it’s a story of black entrepreneurship, about ownership and creativity blossoming even in a society determined to hold certain people back. The title itself, declarative and definitive, is a shout of confidence. Dolemite Is My Name leaves you wanting to go out and make something—a poem, a painting, a piece of music—even just for yourself, to leave your mark on the world.

It’s also hugely entertaining and joyously profane, a movie whose spirit is so big the screen can barely contain it. The 1975 Dolemite, starring Moore in the title role and directed by first-timer D’Urville Martin, is a landmark of Blaxploitation cinema, though it came along after more polished pictures like Gordon Parks’ Shaft, from 1971, or Larry Cohen’s 1973 Black Caesar, had already ushered the genre into being. Moore had had a mildly successful career as a singer, dancer and comedian in the late 1950s and early 1960s, but by 1970, he was stuck working in a Los Angeles record store. Around that time, he took some outré stories he’d heard from the local drunks and wove them into an alter-ego for himself, that of Dolemite, a kind of Afro-beatnik troubadour in wild suits and a puffy wig.

The language of Moore-as-Dolemite’s spoken-word comedy was salacious and raw, and the larger, established record companies wouldn’t touch it. So Moore began self-producing albums, often recording them in his own living room with his friends as the audience. The records became underground hits, and Moore figured he could probably become a film star, too: He poured his earnings into the film that would become Dolemite, casting himself as a suave, karate-chopping, racist-cop-killing poet of the streets, ruling benevolently over a stable of prostitutes trained in the martial arts. By the mid-1970s Moore was no strapping young movie star, and the picture’s production values were laughably crude, just slightly above shaky-home-movie level. But none of that mattered. Dolemite, with its brash cartoon violence and over-the-top sex scenes, became a huge hit, and even today you can see why: The picture has an untamed, crackling energy. Dolemite Is My Name—directed by Craig Brewer, written by Scott Alexander and Larry Karaszewski and released through Netflix—tells the story of how Moore almost single-handedly willed this wild and weird little movie into being.

Dolemite Is My Name begins before Dolemite—the movie or the persona—is even a dream. Murphy’s Moore is toiling away at that record store, trying to persuade the in-house DJ (played by unalloyed genius Snoop Dogg, who at one point appears in a jaunty striped tam o’shanter more original than anything Alessandro Michele could dream up for Gucci) to play some of his old almost-hit singles. No way is that going to happen, but Moore doesn’t give up. When he’s forced to march a urine-stinky lush named Rico away from the store, he takes a few minutes to actually listen to the guy’s loopy stories, and Dolemite is born.

Moore’s path to greater fame and at least modest riches is rocky: He needs money to make his first record, and his Auntie (played by the actress and writer Luenell), while she’s happy to cook him a pork-chop dinner in her homey kitchen, refuses to lend him any. But he persists, helped along by friends like his sweet co-worker T. Toney (Tituss Burgess), as well as Ben Taylor (Craig Robinson), the musician who will go on to write and perform the crazily addictive Dolemite movie theme song. Once he’s put out a successful record or two, he then has to deal with the encroachment of white people who want to make money off of him without giving enough back.

He also needs to will his dream of a movie into being on less than a shoestring, and he starts by taking over a decrepit old Los Angeles hotel and turning it into a movie studio: Its aura of faded, musky glamour is like a benevolent ghost. He finds a serious playwright, Jerry Jones (Keegan-Michael Key), to write a script that will capture the grit and glory of Dolemite’s highly fictitious life. He also needs a director, so he hires Martin (a wonderfully huffy Wesley Snipes), a moderately successful actor who, Moore incorrectly surmises, will know what he’s doing when it comes to making a film. His taste in co-stars is much better: He brings on a friend from his days on the club circuit, Lady Reed (the marvelous Da’Vine Joy Randolph) to play Queen Bee, the madam who looks after Dolemite’s “girls,” and who’s also the true-blue friend who gets him out of jail.

The generous, rolling spirit of Dolemite Is My Name comes largely from its ensemble cast. Even though Brewer—who has made some terrific and daring movies over the years, including Hustle & Flow (2005) and Black Snake Moan (2006)—keeps the story moving briskly, no single character gets lost. Those in even the smallest roles have some definition and distinction. Murphy presides over it all, with tell-it-like-it-is radiance. His timing is cobra-strike precise, as always; his smile, defined by that gap he has thankfully never fixed, is both conspiratorial and expansive. But there’s something moving about him, too, as a past-middle-age actor playing a performer who’s grabbing at what he knows is his last chance. Strutting about in Ruth E. Carter’s exquisitely out-there costumes—including jackets with zig-zag lapels as exaggerated as toy rocketships—Murphy’s Dolemite is an unlikely miracle of self-invention and reinvention, a man who knows nothing lasts forever. So why not try to make something that will last?

Dolemite Is My Name is a splendid entertainment, but it’s wrapped around a very serious idea. How does anything of worth—a book or a business, a piece of music or a movie—ever get made? Writer, director and actor Robert Townsend financed his sharp 1987 satire Hollywood Shuffle largely using his own credit cards. Ava DuVernay was a film publicist and maker of documentary and microbudget films before she was tapped to direct Selma. Rudy Rae Moore put everything on the line to make a movie that might never have seen the light of day. But Dolemite lives. You can watch it today, laughing at its brazen, ultra-fake violence, at Moore’s shaky amateur karate kicks, at the almost quaint obviousness of its gratuitous female nudity—it’s a given that its sexual politics are outmoded. But Dolemite’s “Hey, guys, let’s make a movie!” spirit should never go out of fashion. Dolemite Is My Name and Eddie Murphy’s performance in it are a celebration of that powerhouse vibe. Now go out and make something. 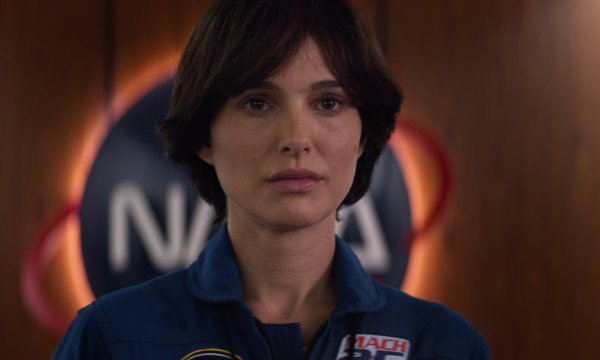 The True Story Behind Lucy in the Sky—and the One Key Detail the Movie Leaves Out
Next Up: Editor's Pick