The House Just Voted for the Next Steps in Trump's Impeachment Inquiry. It Will Only Get More Partisan

The U.S. House of Representatives has formally passed a resolution laying out the next steps in the impeachment inquiry of President Donald Trump.

The resolution, which passed 232-196 Thursday morning, was almost entirely along party lines. No Republican joined the Democrats—though former GOP Rep. Justin Amash voted for the resolution. Two Democrats—Reps. Jeff Van Drew and Collin Peterson—voted against it.

But the partisan breakdown of the vote shows the uphill battle Democrats will face as they try to convince their Republican colleagues that Trump should be removed from office.

Van Drew, of New Jersey, one of the moderate members of the Democratic caucus who flipped a Republican district last November said he bucked calls from party leadership to support the resolution, in part because he was concerned the process was becoming too partisan and setting a damning precedent.

“[Impeachment] is a really high bar,” he said. “We’re going have a failed impeachment where the President was exonerated, and we’re going to split the country apart, even further because of all this, which I think is bad.”

Speaker Pelosi presides over the U.S. House of Representatives as it votes on a resolution formalizing the impeachment inquiry centered on U.S. President Donald Trump in Washington, D.C., on Oct. 31, 2019.
Win McNamee—Getty Images

The resolution is largely procedural, detailing the guidelines for how House Permanent Select Committee Chairman Adam Schiff will conduct public impeachment hearings and how House Judiciary Chairman Jerry Nadler will conduct subsequent proceedings. It also lays out what House Republicans and Trump can expect during the process—undermining their arguments Republicans have been making for weeks that the secrecy of the inquiry is unfair.

Democratic Rep. Sean Patrick Maloney, a member of the House Intelligence Committee who supported the resolution, said it is the surest sign yet public hearings are on the horizon. “We have a good handle on what took place and we’re prepared for the public to judge the evidence for themselves,” he said.

Under the guidelines, Republicans can call witnesses if Schiff and Nadler agree, and Trump’s attorneys will be allowed to make their case and present evidence during the Judiciary Committee proceedings. However, if the White House does not cooperate with the inquiry, Democrats reserved the right to take those privileges away.

The Judiciary Committee pointedly released a chart arguing that the access and information Trump will be afforded in the upcoming process are on par with those provided to his two predecessors, Richard Nixon and Bill Clinton, who faced impeachment inquiries in the last half century. “These rules are fairer than anything that have gone on before,” House Speaker Nancy Pelosi told reporters.

Despite these moves, for the time being, Republicans will continue to rail against these procedures, griping about their inability to unilaterally issue subpoenas and the caveat allowing Nadler to revoke the privileges of Trump’s lawyers.

“All [the resolution] does is codify what we have been clear about all along—that it’s actually a tainted process,” said House Minority Whip Steve Scalise. “How can you say it’s fair when only one side gets to call witnesses?”

“This is not due process, it’s faux process,” said Republican Rep. Mark Meadows, one of the President’s strongest allies in Congress. “This still gives Democrats all of the control. They decide in the morning how fair they’re going to be.”

The White House condemned the vote, saying in a statement that the “Democrats’ unhinged obsession” with impeachment “hurts the American people.” The statement also accused Democrats of wanting to “render a verdict without giving the Administration a chance to mount a defense.”

One Republican strategist, requesting anonymity to speak more candidly, said Republicans would try to play the process card as long as possible, in no small part because it was easier than dealing with actual allegations against the President. “They need to push [the process argument] until it runs out,” the strategist said.

But the divisions at play highlight the toxic environment in the Capitol right now. Impeachment was always going to be a political fight, but Pelosi herself insisted she wanted it to be bipartisan.

“This is about patriotism,” she said Thursday at her weekly press conference. “I would hope that rather than protect the President personally our colleagues would choose to honor our oath of office.”

Currently, though, it is anything but unifying.

“Impeachment shouldn’t become a tool that we use on a regular basis,” Van Drew, one of the Democratic defectors, said. “That’s not what impeachment is.” 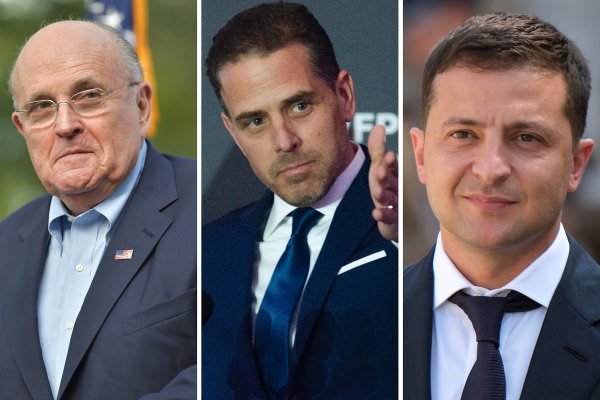 Here Are the Key Players in Trump's Impeachment Inquiry
Next Up: Editor's Pick