Attorney General William Barr has been implicated in the whistleblower complaint that spurred an impeachment inquiry into President Donald Trump, raising new questions about Barr’s apparent involvement in Trump’s alleged efforts to pressure a foreign nation to influence his political opponent.

The whistleblower implicates Barr directly in the opening lines of the complaint, which was made public Thursday. “In the course of my official duties, I have received information from multiple U.S. Government officials that the President of the United States is using the power of his office to solicit interference from a foreign country in the 2020 U.S. election,” the complaint reads. “This interference includes, among other things, pressuring a foreign country to investigate one of the President’s main domestic political rivals. The President’s personal lawyer, Mr. Rudolph Giuliani, is a central figure in this effort. Attorney General Barr appears to be involved as well.”

The Justice Department did not respond to request for comment Thursday about the whistleblower complaint.

Democrats say the President was using the U.S. Justice Department to help him as part of a plot to dig up dirt on one of his political opponents to increase his chances of keeping power in the next election. These are extraordinary allegations, unseen since the Richard Nixon era. “It raises questions about abusing presidential power, and it’s already akin to the 1970s with Nixon much more than the 1990s” with Bill Clinton, says Julian Zelizer, a professor of history and public affairs at Princeton University. Zelizer notes that Trump is not acting alone, as he suggested that the Ukrainian leader talk to Barr and Trump’s personal lawyer Rudy Giuliani. “The lines between his own personal interests and the boundaries of legit foreign policy are totally blurred,” Zelizer says.

According to a memorandum of Trump’s July 25 call with Ukrainian President Volodymyr Zelenksy, which is at the heart of the whistleblower complaint, Trump asks for a “favor”—that Zelensky help Barr investigate the origins of the special counsel’s investigation. “I would like to have the Attorney General call you or your people and I would like you to get to the bottom of it,” Trump said, according to the memo, which was released Wednesday and is not a direct transcript of the call.

He then also asks Zelensky to work with Barr to investigate Joe Biden— a potential Democratic rival in the 2020 election— and his son Hunter Biden’s work in Ukraine. “The other thing, there’s a lot of talk about Biden’s son, that Biden stopped the prosecution and a lot of people want to find out about that so whatever you can do with the Attorney General would be great,” Trump said. “Biden went around bragging that he stopped the prosecution so if you can look into it…It sounds horrible to me.”

The Justice Department denies that Trump ever followed up with Barr about this conversation, or that Barr ever spoke to Zelensky.

While Barr is a new focal point for concerns over the Administration’s conduct with respect to Ukraine and alleged efforts to influence the election, the Justice Department as a whole continues to be dogged by questions of politicization, as it has throughout the Trump presidency. On Wednesday, under pressure from congressional Democrats, the Department’s Office of Legal Counsel released an opinion explaining its legal rationale for determining that the whistleblower’s complaint wasn’t a matter of “urgent concern” and thus the Director of National Intelligence wasn’t bound to turn it over to congressional intelligence committees.

All of which is contributing to escalating alarm among Democrats about how Barr may have been involved in this process or the underlying incidents. “I asked Attorney General Barr whether the White House had ever asked—or suggested, hinted, or inferred—that he open an investigation into anyone,” California Sen. Kamala Harris, a 2020 Democratic candidate for president, tweeted Wednesday, referencing a line of questioning at his May congressional testimony about former special counsel Robert Mueller’s report. “At the time, he seemed stumped. Barr must come back to Congress and answer that question under oath.”

House Judiciary Chairman Jerrold Nadler, a Democrat from New York, also weighed in. “The President dragged the Attorney General into this mess,” he tweeted on Wednesday. “At a minimum, AG Barr must recuse himself until we get to the bottom of this matter.”

Since his confirmation in February 2019, Barr has been in the middle of the some of the most consequential battles gripping the country. Mueller delivered the results of his multi-year investigation into Russian interference in the 2016 election and whether Trump obstructed justice to Barr after Barr had been on the job for just five weeks. Barr has emerged as a staunch defender of the presidency, preempting the full release of the 400-page Mueller report with his own simplified explanation of its conclusions: no collusion and no obstruction. (Mueller had declined to render a verdict on whether Trump obstructed justice; Barr determined he had not.)

Barr did not recuse himself from overseeing the Mueller investigation, despite some previous remarks and writings criticizing it, and it’s unlikely he will recuse himself here. Which means that however the impeachment inquiry proceeds, the Attorney General will remain a central figure alongside the president. 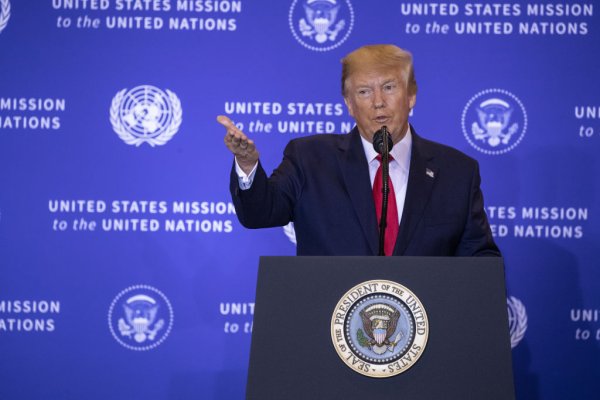 Key Parts of the Ukraine Whistleblower's Complaint
Next Up: Editor's Pick