Trump's Treatment of Women Was His Original Abuse of Power

US President Donald Trump speaks during a rally in El Paso, Texas on February 11, 2019.
Nicholas Kamm—AFP/Getty Images
Ideas
By Amanda Carpenter
Amanda Carpenter is a CNN contributor and the author of Gaslighting America: Why We Love It When Trump Lies to Us.

At this point, who can even keep track of all the women who have made allegations of sexual misconduct against Donald Trump? About a dozen women complained about past aggressive and unwanted sexual advances by the man during his presidential campaign. The hush money Trump paid to keep his trysts with a Playboy Playmate and an adult film actress secret from voters were revealed after his inauguration. Earlier this year, Elle advice columnist E. Jean Carroll alleged that Trump raped her in a dressing room in the ‘90s. And now in a new book, All the President’s Women: Donald Trump and the Making of a Predator, Barry Levine and Monique El-Faizy claim to have unearthed 43 new accusations against the President.

Trump’s backers either refuse to believe the allegations against him — which he has always denied — or think they don’t matter. They didn’t blink, for instance, when Trump said after Carroll’s allegation that “people should pay dearly for such false accusations.” And his accusers have paid dearly in terms of their reputation and safety, haven’t they? These women have been smeared, sometimes by the President himself, and faced threats for daring to come forward. Carroll has said she sleeps with a loaded gun by her bedside; Trump, meanwhile, is guarded 24 hours a day by the Secret Service. It seems that the false notion that a President’s personal transgressions can be separated from his official work is prevailing. “Grab ‘em by the pussy” is tolerable to Trump supporters as long as Trump isn’t grabbing them, their wallets or otherwise violating their personhood. Because they haven’t been directly hurt by Trump, they just don’t seem to care.

Perhaps now, in light of the impending impeachment proceedings, is an apt moment to reflect upon the mindset of an abuser. What does it mean when a man who believes “when you are a star they let you do it” becomes President? Sexual assault is, at its core, an abuse of power. Only a person full of entitlement and lecherous self-interest and devoid of morality preys on others in such a manner. Only someone who views women as vessels from which something gratifying can be gained, whatever the cost to their humanity. Someone who believes that some people’s lives matter less than others.

The lack of respect, dignity and empathy Trump reportedly displayed toward women in his civilian life is evident in the way he’s behaved toward myriad more people as someone bestowed with the awesome powers of President of the United States. For far too many people, there’s simply no escaping the abuse now.

His Administration’s family-separation policy at the Southern Border is one grim example. While a President is entitled provide policy guidance, it is usually not as ill-considered and politically craven as this. In its desire to deliver on his campaign promise to secure the border, the Trump Administration cracked down on the most vulnerable. Migrant children were ripped from the arms of their mothers and fathers under Trump’s “zero-tolerance” policy where the cruelty of separation was, infamously, the point. Rather than feeling any concern about the lasting harm his policy, which was met with tremendous public outcry, may have caused to these children, Trump said in April that ending the practice was a “disaster.”

The president derives his influence not only from the powers vested to him by the Constitution, but from the massive media platform that accompanies the job, especially when he so deliberately amplifies his callous messages on Twitter and television. His words — including his comment that there were “very fine people” among the white nationalists parading in Charlottesville while chanting Nazi slogans — have stoked the rise of white supremacy, terrorizing Jews and people of color. In the past year, there have been two mass shootings at U.S. synagogues. Prior to the October 2018 shooting at the Tree of Life synagogue in Pittsburgh, the alleged gunman used the word “invaders” to describe Jewish refugees and posted about a “migrant caravan” at the Southern border, a term Trump used to drum up anger about illegal immigration and get out his base for midterm elections. Even after the murders, Trump kept tweeting about the “caravan,” warning in one tweet that “the U.S. is ill-prepared for this invasion, and will not stand for it.” In August 2019, after writing in a manifesto about a “Hispanic invasion of Texas,” a 21-year-old white man drove 10 hours to a Wal-Mart in El Paso, Texas, where he killed 22 people and injured two dozen. Two parents were gunned down in cold blood while shielding the body of their 2-month-old baby. One Latino woman told the New York Times, “It feels like being hunted.”

None of the carnage has made Trump rethink his rhetoric.

More recently, there’s the awful plight of the Kurds who Trump abruptly abandoned in Syria. Trump’s unilateral decision to ditch our allies, who volunteered to stand in the gap between the United States and ISIS, represented a drastic shift in American foreign policy where key policymakers deserved notification. His announcement was shocking, as pulling U.S. troops so swiftly from the region meant immediate slaughter for the Kurds, a minority group previously given widespread support from Congress. Is this the thanks they deserve after delivering critical resources to help America track down and kill ISIS terrorist Abu Bakr al-Baghdadi? Most certainly not. So how can the Trump Administration treat them as nothing more than pawns in his erratic geopolitical game? It is as though, to Trump, the Kurds have exhausted their usefulness and he doesn’t care whether they are disposed of by the Turks.

Trump’s brutality has an explanation. He sees others as either obstacles or a means to an end and acts accordingly. This is why he can so casually call the press “an enemy of the American people,” even after one man sent pipe bombs to CNN, where I work, and to the addresses of Democratic politicians and donors, or, as he did last week, describe Republican critics as “human scum.”

So, let’s stop pretending the President’s conduct is strictly a personal matter and more people won’t be harmed. History has proven the more power Trump has been given, the more people he’s hurt. The man and his poor character are one and the same.

In this way, it seems fitting that the phrase “abuse of power” is being used in terms of impeachment. “Abuse of power” is not only something a man can wield against a woman, but against his country, too. The Ukraine investigation isn’t really telling us anything we didn’t already know about Trump’s disgraceful nature. He has always been a person who puts his own interests above others, no matter how much damage is inflicted in the process.

Anyone who has observed Trump can see he has always sought to abuse his power and influence. The women who came forward in 2016 tried to warn us about the harm he was capable of. Just think of how much suffering would have been prevented if we had listened. 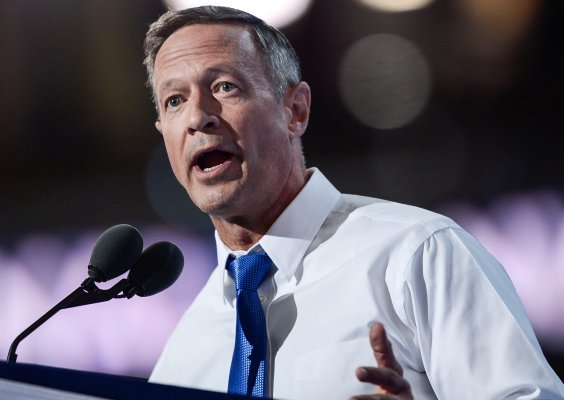 The Federal Government Has Lost Our Trust. It Could Learn Something From Our Cities
Next Up: Editor's Pick