Abu Bakr al-Baghdadi Is Dead. Where Does That Leave ISIS?

Abu Bakr al-Baghdadi, the fugitive emir of ISIS, the man who transformed a breakaway al-Qaeda group into a transnational terrorist franchise that brutalized and killed civilians in more than a dozen countries and who threatened to rewrite the map of the Middle East by luring foreign recruits to wage jihad in Iraq and Syria, is dead.

So what happens to the terror organization that he painstakingly assembled?

In many ways, the group is already evolving. ISIS leadership ranks have proved resilient despite more than five years of war. The group has been quick to adapt to new circumstances. No longer capable of seizing and holding territory, the surviving foot soldiers have instead gone back to their guerrilla roots, carrying out ambushes, bombings and assassinations. And despite the loss of its territorial caliphate in Iraq and Syria, ISIS has expanded its reach to include 14 separate affiliates in countries across Asia and Africa.

In the long-term, analysts say, what may be most significant about Saturday’s Special Operations commando raid is not al-Baghdadi’s decapitation from ISIS’ shadowy hierarchy but the ease with which he will be replaced. The group, like its predecessor organization, Al Qaeda in Iraq, routinely taps new commanders to fill the vacuum left by those who are assassinated. The replacements occur with such regularity that the U.S. Special Operations community jokingly refers to removing leaders as “mowing the grass.”

“Abu Bakr al-Baghdadi’s death —welcome and important though it may be— is not a catastrophic blow to the quality of leadership in ISIS,” says Michael Nagata, who retired as Army Lieutenant General and strategy director from the National Counterterrorism Center in August.

Nagata, who served in the Middle East as a Special Operations commander in 2014 when the counter-ISIS campaign began, says ISIS now has a cadre of young battle-hardened leaders who are climbing toward the top echelons and establishing themselves in the terror group’s global network. “ISIS isn’t a crippled organization because Baghdadi’s gone,” he says. “The depth and breadth of ISIS leadership, in my judgment, is unprecedented for this type of terrorist group.”

Since the first days of U.S. involvement in the war against ISIS, Special Operations forces and intelligence agencies hunted and killed the group’s leaders one-by-one. But they’ve always regrouped.

“As we’ve seen over the last several years, the group also has a strategy to carry on operations into the next decade,” says Aki Peritz, a former CIA counterterrorism analyst and co-author of “Find, Fix, Finish: Inside the Counterterrorism Campaigns that Killed bin Laden and Devastated Al Qaeda.” “It’s good to take out the leader, but it’s not just a terrorist group —it’s an ideology as well; stamping out the idea of the Islamic State will prove to be much more difficult than one successful military/intelligence operation.”

After all, al-Qaeda endured after founder Osama bin Laden was killed in a 2011 Navy SEAL raid. And Al Qaeda in Iraq lived on as ISIS after its founder, Abu Musab al-Zarqawi, was killed in a 2006 U.S. airstrike.

U.S. counterterrorism officials expect ISIS to name a successor in the coming days or weeks. A likely candidate is al-Baghdadi’s defense chief, Iyad al-Obaidi. But regardless of who leads the Sunni extremist group, it is now a shadow of the organization that launched a lightning offensive in Iraq and Syria that resulted in the seizure of territory the size of Britain and raked in millions of dollars a day.

The seeds for resurgence, however, are there. According to a recent Defense Department Inspector General’s report, ISIS has between 14,000 and 18,000 members who’ve pledged allegiance to al-Baghdadi. In addition, there are more than 30 detention camps that hold about 11,000 ISIS fighters, sympathizers and other associated detainees across northern Syria. Another camp for internally displaced persons known as al-Hol, in northeastern Syria, holds nearly 70,000 people, including thousands of ISIS family members. The U.S. military reported in February that “absent sustained pressure,” the terrorist group would re-emerge in Syria within six to 12 months.

Moreover, ISIS remains a worldwide threat because the group has a constellation of affiliates in places as far-flung as Nigeria and Pakistan, according to a report from the Institute for the Study of War in Washington. “ISIS’ global presence provides footholds from which to further metastasize, launch attacks, and gain resources to fund its resurgence in Iraq and Syria,” the report said, documenting recent plans for attacks on the West that emanated from affiliates in Libya, Somalia and the Philippines.

The death of militant leaders, however, frequently leads to fractures within terror organizations and new directions in strategy, says Norman T. Roule, a former senior CIA officer with experience in Middle East issues. “In the wake of Baghdadi’s death, ISIS groups abroad could go in a number of directions,” he says. “Some may decide to reconcile with al-Qaeda, some may decide to undertake revenge operations to demonstrate that ISIS remains potent. Some planned operations could be accelerated if the ISIS planners believe the intelligence found with Baghdadi might identify them.”

A Syrian man inspects the site of helicopter gunfire near the northwestern Syrian village of Barisha on Oct. 27, 2019.
Omar Haj Kadour—AFP/Getty Images

Colin P. Clarke, a fellow at the Soufan Center and author of “After the Caliphate: The Islamic State and the Future of the Terrorist Diaspora,” says there have already been signs of an “ISIS 2.0” emerging. “It’s unclear what Baghdadi’s death could do to exacerbate the changes underway,” he says. “Baghdadi was the face of the ISIS brand. He had a cult of personality.”

These talents didn’t register on his captors, though, who judged al-Baghdadi to be a low-risk prisoner. Released at the end of 2004, he returned to the Iraqi capital, where he pursued a doctorate and joined a series of jihadi groups invigorated by the fall of Saddam Hussein and the U.S. occupation. In early 2006, he found his ultimate home in the Iraqi al-Qaeda offshoot led by Zarqawi, a former violent criminal from Jordan whom U.S. forces killed that June. Al-Baghdadi’s nominal religious qualifications and rigid dogmatism carried him quickly through the ranks, and in May 2010, after the U.S. killed the only two men above him, he emerged as the emir.

Along with his ambitious territorial goals in the Middle East, al-Baghdadi elaborated an apocalyptic vision of a final battle between the forces of radical Islam and the West. In a Ramadan sermon in mid-2014, he declared slavery the universal human condition: Muslim believers are indentured to Allah, while nonbelievers are the rightful property of Muslims. He also said the time of death for each man and woman is preordained, implying that all killings must be the will of Allah. This teaching paved the way for his chief spokesman to deliver the following message to ISIS supporters everywhere a few months later: “If you can kill a disbelieving American or European,” the spokesman said, “kill the disbeliever whether he is civilian or military.”

President Donald Trump announces the death of ISIS leader Abu Bakr al-Baghdadi, in a raid by American special operations forces in Syria, at the White House on Oct. 27, 2019.
Gabriella Demczuk for TIME

The bloodthirsty rhetoric, often relayed on slickly produced videos that pin-balled around social media, proved an innovative tactic that resonated with disaffected youth. ISIS recruited around 43,000 fighters from 120 countries to the caliphate in Iraq and Syria. Some acted in al-Baghdadi’s name at home, killing hundreds of innocents at hotels, mosques and concert halls from Paris to the Sinai, Beirut to San Bernardino, Calif.

The widespread violence earned al-Baghdadi a $25-million U.S. bounty on his head and enemies across the world. He went underground. For years there were erroneous reports that he was seriously wounded or killed. After the collapse of his self-proclaimed caliphate, al-Baghdadi had been shuttling back-and-forth in the desert between western Iraq and eastern Syria, traveling mostly in cars and Toyota pickup trucks with a small entourage that included heavily armed bodyguards, according to a U.S. intelligence official. He rarely stayed more than one night in the same place, and like bin Laden, communicated by courier rather than using phones or computers, the official said. Al-Baghdadi was located when Iraqi forces picked up two members of his entourage in an unrelated operation and passed the intelligence they collected to the CIA.

After a five-year absence from public view, al-Baghdadi had appeared April 29 in an 18-minute propaganda video. In a black tunic with a Kalashnikov rifle at his side, he stated that ISIS’s fight against the West was far from over. “Our battle today is a war of attrition to harm the enemy, and they should know that jihad will continue until doomsday,” he told a roomful of followers seated cross-legged on the floor.

A U.S. counterterrorism official, who was not authorized to speak publicly on al-Baghdadi’s death, told TIME that danger still looms from al-Baghdadi’s call for followers to shift from larger attacks to more small actions outside Iraq and Syria. Even so, the official said that al-Baghdadi’s death, while partly symbolic, would “silence maybe the most inspirational terrorist voice that remained.”

—with reporting by John Walcott and Kimberly Dozier from Washington 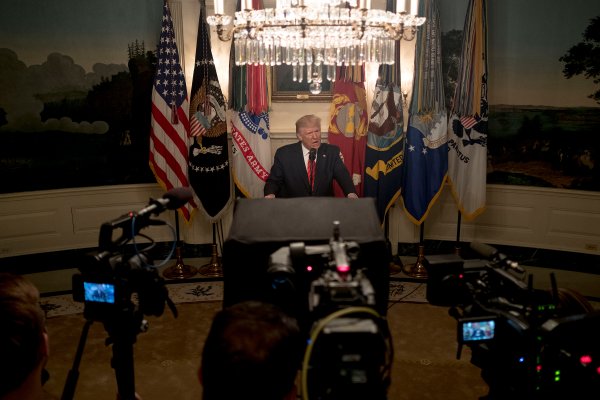 Why Trump Mocked al-Baghdadi and Gave Gruesome Details of the ISIS Leader's Death
Next Up: Editor's Pick