To understand what it means to be famous like Stormy Daniels, for the reasons she is famous, spend time with her in a public space. She walks quickly, her head down, blending in with the neighborhood moms at an upscale Manhattan mall–petite, hardly noticeable in jeans, sneakers and a gray, long-sleeved T-shirt. But her anonymity is deliberate. She avoids eye contact, folding into herself as if pressing into a fierce wind.

Once inside the shelter of a photo studio, she unfurls, becoming yet again the woman we know from the media: wry, unflinching and lightning quick with a snarky retort. It has been an incendiary year. On Oct. 15, a California judge threw out the defamation case she filed against Donald Trump. Her other lawsuit against the President, over a nondisclosure agreement (NDA) that forbade her to talk about their alleged 2006 affair, continues to wend its way through the court system.

Over the past year, Daniels, 39, has become the Zelig of White House scandals. Her NDA, in which she and Trump were both referred to by pseudonyms, was first reported in January, and in August, the President’s former personal lawyer Michael Cohen admitted to working with Trump to pay her $130,000 in hush money. A day later, Trump reversed his previous story, saying he’d known about the deal with Daniels and paid Cohen back himself.

And while the saga has barely ruffled the President’s poll numbers, it has transformed Daniels’ life, making her simultaneously a target of vitriol and a hero for feminists, depending on which side of the Trump divide you’re on. “Who would have thought that 90 seconds with Donald Trump would turn into 90% of my life?” she asks.

Lost somewhere in all this is the story of a girl who grew up in Baton Rouge, La., deep in what is now Trump country. The childhood she describes in her new memoir, Full Disclosure, a New York Times best-seller, was marked by resilience in the face of deprivation, neglect and sexual abuse. She was a smart kid who got A’s at the local magnet school but went home to a house that had rats and roaches and not enough to eat. She writes that she has already beaten the odds because, by all accounts, she should be “living in a trailer with no teeth.” As with a lot of people who grew up without resources, her unease about money lingered long after she didn’t have to worry about her next meal: “It used to be that a hunger pang would create panic,” she says.

For those reasons and more, Daniels defends using her current spotlight to her advantage, stacking up paid performances and unpaid interviews, in the name of building her brand. “I’m doing the same thing I’ve always done,” she says. “But if you drive an ice cream truck and the city has a heat wave, you’d be an idiot not to drive your ice cream truck.” Almost nothing makes her angrier these days than being called a “retired” porn star, as several reporters have done, as if the revelation of l’affaire Trump offered her a comeback. She points out that the story about her NDA broke last January, and weeks later, she was nominated in multiple categories at the Adult Video News awards for her previous work. “How is that retired?” she says.

But her new perch in the global limelight has taken a toll she couldn’t have foreseen nearly two years ago, when lawyer Michael Avenatti offered to help her challenge her NDA. There has been the wave of death threats and the sudden need for bodyguards. But worse, there was the repeated publication of her given name, annihilating the already flimsy wall of privacy between her profession and her home life. (TIME has published Daniels’ legal name in the past, and it is readily available online.) She worked for years to escape the instability of her youth, to build a career, however unorthodox, to create a home in Texas and buy horses and teach her 7-year-old daughter to ride. And now that life has been overturned, perhaps permanently. She shields the girl from the news–no TV, no radio–but there’s inevitably a limit to how long she can protect her.

Daniels grieves over the way her sudden fame has affected the people in her life, even near strangers, like the two young women who were arrested with her at a Ohio strip club in July. It was a controversial raid that Daniels insists was politically motivated and that Columbus police chief Kim Jacobs later admitted was a mistake. (Charges involving touching patrons were later dropped.) But the damage was done, Daniels says, not so much to her as to the other two women. “Those girls’ lives are ruined because their mug shots and real names are printed in the paper, and printed in a story that has my name in it,” she says. “So they’re forever attached to the ‘dirty porn star.'”

Perhaps most painful, Daniels says, is that her marriage has not withstood the drama that her life has become. That alleged encounter in a hotel with Trump happened years before she and her husband began dating around 2010, but Daniels says she never told him. Instead, he found out on the news. “If I could do it over, I would have tried harder to find an appropriate time to tell my husband,” she says. (Her husband filed for divorce in July.)

In her book, Daniels makes the case that she is a lot more than that one encounter with a reality-TV star. But when I ask if she worries she’ll share the fate of Monica Lewinsky, who struggled for decades to escape the shadow of a relationship with a President, the answer is yes. “I’d like to be remembered for being a fair and good leader” of her film-production crew, she says. “But let’s face it, I’m going to be known as the porn star who slept with Donald Trump.” That reputation, she fears, will not only define her; it will likely preclude any other romantic relationship. Any future partner would “be teased and tortured relentlessly,” she says.

It’s a profoundly sad revelation, complicated in part by Daniels’ unflappable resolve. She does not regret coming forward, she insists. She does not regret “telling the truth.” But the fallout has lasted longer than she ever expected. When her defamation suit was tossed out, Trump attacked her on Twitter, going after her looks, as he often does with female foes. “Great, now I can go after Horseface and her 3rd rate lawyer in the Great State of Texas,” he wrote, referring to her ongoing lawsuit. The tweet ignited a cable news frenzy. Daniels responded quickly and in kind: “Game on, Tiny.” Though powerless in any traditional sense, Daniels is clearly no shrinking violet. Label her a whore and she just laughs, impervious to that kind of shaming. “That’s rich whore,” she counters, thankyouverymuch.

I ask if the omnipresent Avenatti is using her to build his career and a possible presidential bid. “If he runs for President, I’m going to run against him,” she jokes. But no, he’s not exploiting her, she insists. If anything, it’s the other way around. “I’ve paid him all of $20, though he doesn’t like me telling anyone that,” she says, laughing. “If he wasn’t already bald, he would be bald by now because of me.” (And no, she says, there’s nothing between them.)

In mid-October, Daniels flew to Berlin to continue her book tour. Inevitably she will be asked about the President and his private parts. She’ll answer gamely, pushing her memoir, punching above her weight, and then pack up for the next city. It’s a bargain she made willingly, even if she didn’t quite know the price. So there’s nothing to do but to keep moving, head down, not knowing exactly what her life will look like when the winds let up.

In an earlier version of this story, the age of Daniels’ daughter was incorrect. She is seven. 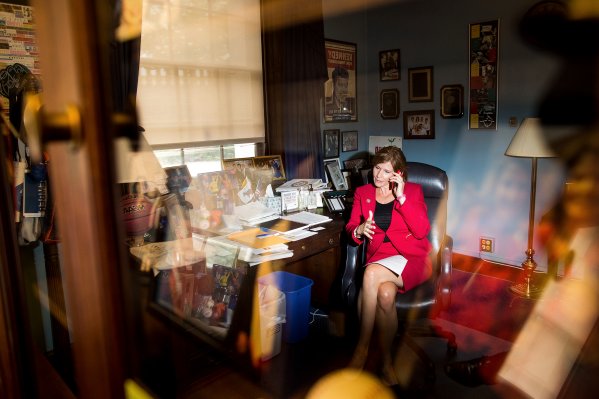 The Democrats' Path to Winning the House Runs Through the Midwest
Next Up: Editor's Pick