A settlement agreement reached Wednesday between American Media Inc. and former Playboy model Karen McDougal has released her from a contract that had prohibited her from talking about an affair with President Donald Trump that she is alleged to have had.

American Media Inc., which owns the National Enquirer, paid McDougal $150,000 in 2016 for the exclusive rights to her story, but then never ran it. McDougal filed a lawsuit last month to invalidate the contract, which she said she was “misled into signing.” The settlement means the company avoids discovery phase of litigation in which its staff would have had to answer questions under oath about its practices.

“My goal from the beginning was to restore my rights and not to achieve any financial gain, and this settlement does exactly that,” McDougal said in a statement Wednesday. “I am relieved to be able to tell the truth about my story when asked, and I look forward to being able to return to my private life and focus on what matters to me.”

Trump is also facing a lawsuit from adult film star Stormy Daniels, who said she had a consensual sexual relationship with him in 2006 and received a $130,000 payment from Trump’s personal attorney, Michael Cohen, days before the 2016 presidential election to keep quiet about the alleged affair.

Trump has denied both affairs. 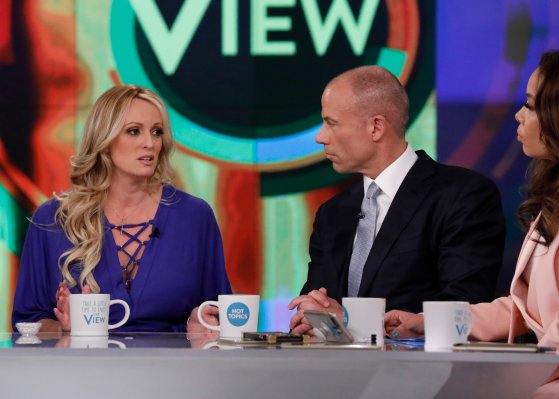 Stormy Daniels Reveals Sketch of the Man She Says Threatened Her Over Trump Affair
Next Up: Editor's Pick