'Resiliency, Strength and Community Collaboration': How Tree of Life Synagogue Is Moving Forward 1 Year After Tragedy

A group of students from a Pittsburgh Yeshiva school gather outside the Tree of Life synagogue in Pittsburgh on Sunday, Oct. 27, 2019, the first anniversary of the shooting at the synagogue, that killed 11 worshippers.
Gene J. Puskar—AP
By Mahita Gajanan

One year after a gunman killed 11 people inside Pittsburgh’s Tree of Life synagogue, flowers, artwork and other objects of memorabilia surround what is now the site of the deadliest anti-Semitic attack in U.S. history, as congregants outline tentative plans on reopening the house of worship.

Eleven people were killed and six were injured on Oct., 27, 2018, after a man authorities say was carrying an AR-15 rifle and other weapons fired at worshippers who had gathered at the Tree of Life synagogue in Pittsburgh’s Squirrel Hill neighborhood while shouting anti-Semitic slurs. The victims, who ranged in age from 54 to 97, included two brothers who were remembered for greeting congregants at the synagogue’s doors each week and a couple who had gotten married at Tree of Life more than 60 years ago. Police charged Robert Bowers, 47, in the shooting, and federal prosecutors said in August that they will seek the death penalty against him.

The conservative Jewish synagogue has remained closed since the shooting, but community members poured in to visit the outside of the site on Sunday to mark the one-year anniversary of the tragedy. A fence enclosing the space was covered with works of art sent in by students from around the country to offer messages of encouragement and healing. More than 100 submissions of artwork came from Marjory Stoneman Douglas High School in Parkland, Fl., where 17 people were killed in a shooting in 2018.

Sherri Roberts, a resident of the Squirrel Hill neighborhood which houses Tree of Life, spent part of Sunday morning walking slowly by the fence to take in each drawing. As an artist and a former member of the Dor Hadash congregation, which met at Tree of Life, Roberts says she was curious about how people would use the events of the shooting to process their feelings through art.

“To see how the Marjory Stoneman folks reacted, it’s awful and it’s wonderful at the same time,” Roberts tells TIME. “I didn’t know I would feel this overwhelmed.”

Dozens of Pittsburgh community members stopped by the synagogue on Sunday, where some people hugged each other in tears and others gathered for prayer. Every hour, a local rabbi would make a few remarks and share words from the Torah for 11 minutes—each minute to honor the shooting victims. Rabbi Yossi Rosenblum, a rabbi at Pittsburgh’s Kesser Torah synagogue, had the 1 p.m. slot, and spoke to congregants about the need for hope.

“I spent a lot of time here last year, so this brings back a lot of memories. There’s been a lot of reflection,” Rosenblum tells TIME. “Goodness and kindness will ultimately prevail—there’s a recognition that we need it and we have to redouble our efforts.”

As the Pittsburgh community moves forward in the healing process, plans to eventually reopen Tree of Life are in the early stages. Ahead of the one-year anniversary of the shooting, when a number of community organizations throughout the Pittsburgh area joined together at various events to honor the victims and help the community heal, Tree of Life’s leadership announced that its rebuilding plans center on a vision that reflects “resiliency, strength and community collaboration,” according to a press release.

Questions abound regarding when and how the synagogue will be reconstructed. It’s unclear whether the building that housed the Tree of Life will be demolished and rebuilt in the same spot, or whether the existing site will be renovated. According to Jeff Letwin, a 60-year member of the Tree of Life Or L’Simcha Congregation and co-chair of its steering committee, the process of reopening will likely take about three years.

“We’re considering whether any part of the building should be retained at all,” he says. “Should it all come down? Does it create emotional problems?”

However, some choices have already been made about what a new Tree of Life will look like. When rebuilt, the Tree of Life will include a space for worship for congregants, a memorial for the 11 victims of the shooting and a space for the Holocaust Center of Pittsburgh and Chatham University to use for educational purposes. A space to exhibit the hundreds of objects sent to the synagogue in the wake of the attack will also be set up, says Barb Feige, Tree of Life’s executive director.

Among the more than 300 items that poured in from people expressing solidarity and support for the Tree of Life community in the aftermath of the tragedy are quilts, prayer shawls, paintings, sculptures and origami paper cranes. “Wouldn’t it be lovely to hang them all in some space in a new Tree of Life?” Feige says.

Religious sites that have come under attack in recent years have taken varied approaches to reopening for worship. Some resume services relatively quickly. For example, attendees returned to services four days after a gunman killed nine worshippers at the Emanuel African Methodist Episcopal (AME) Church in Charleston in 2015. “We still believe that prayer changes things. Can I get a witness?” Rev. Norvel Goff told congregants at the time, who responded with a resounding “yes.”

By contrast, almost two years passed before churchgoers in Sutherland Springs, Texas, were able to go back to the First Baptist Church after 26 people were killed in a 2017 shooting. Congregants returned to church in a new building this May, while the site of the shooting was restored as a memorial. The new church includes a worship space, an educational building and a memorial honoring the victims of the shooting.

Different religious communities each have their own ways of responding to hateful attacks, says Timothy Marr, a professor of American Studies at the University of North Carolina at Chapel Hill who studies how sites of cultural significance are remembered.

“When the rebuilding occurs in the very space where the violence occurred, it’s a testimony of strength and resilience,” Marr says. “And in some ways it is a measure of privilege. It takes resources and a communal approach to rebuild, and that is the case in Pittsburgh.”

Marr notes that often, the question of whether a religious site can be rebuilt depends on the amount of resources an organization has. The church in Sutherland Springs, for example, was able to expand into a new building in the wake of the shooting due to funding from the North American Mission Board on behalf of Southern Baptists, KSAT 12 reports. Similarly, the Tree of Life synagogue will enact a fundraising campaign once planners for the reconstruction figure out how much space they need, according to Letwin.

Establishing that Tree of Life will be reconstructed offers some clarity to the Pittsburgh community following a year in which people have attempted to heal or act in response to the shooting. Local organizations have pushed for more stringent gun laws—and Pittsburgh’s City Council even approved three gun reform bills—but the state and federal government have not passed legislation, prompting frustration at the inaction. Feige says the congregation announced the initial plans and vision for the reopening to acknowledge the community’s questions, even though the project of renovating the synagogue will take a number of years.

“We needed to let the public know that we’re not gone,” she says. “Tree of Life will return to that site. We’ll forever remember the 11 lives that were lost, but we will go forward.” 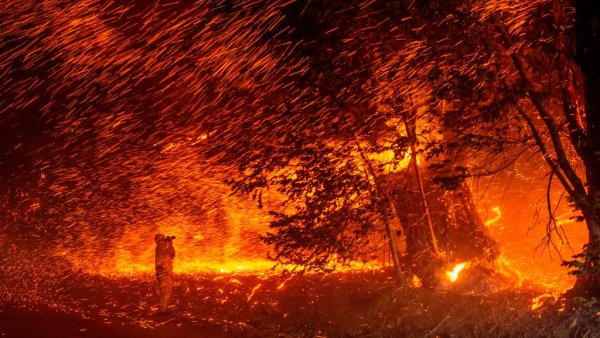 California's Wildfire Power Cuts Bring Risks of Their Own
Next Up: Editor's Pick