With internet culture moving faster than ever before, it can seem like there are constantly new memes going viral. Luckily, that means that if you’ve kept your finger on the pulse of the world wide web, you should have plenty of fodder for an epic Halloween costume.

From the Area 51 raid to Spongebob’s continued online dominance, this year has provided more than enough memes to go around for Halloween 2019 inspiration. And with Oct. 31 still days away, people are already delivering on some hilarious meme-influenced costumes.

For each meme included in this piece, we’ve provided an example explaining its origin along with costumes that parodied it. Here are TIME’s picks for the best meme-inspired costumes of Halloween 2019.

After a Facebook event pledging to storm Area 51 to “see them aliens” went massively viral in July, people couldn’t help but turn the possibility of actually finding extraterrestrials at the highly-classified military base into a series of memes.

This combination of the iconic Real Housewives of Beverly Hills scene in which Taylor Armstrong points and screams at fellow cast member Camille Grammer and the popular confused cat at dinner meme basically had no chance of not going viral when it was originally shared on Twitter in May. These costumes are just the cherry on top of an already perfect creation.

When Kylie Jenner posted a video of herself walking into a room to wake up her baby daughter Stormi — who happened to already be sitting up in her crib — with a musical rendition of the phrase “rise and shine,” the internet immediately ran with it.

Following in the footsteps of Mocking SpongeBob and Traveling SpongeBob, “Ight Imma head out” SpongBob was born when someone photoshopped the phrase onto a screen grab of SpongeBob getting up from a chair in the episode “The Smoking Peanut.” People began frequently using the image to joke about situations that they or someone else would be eager to get out of.

Earlier this year, a photo of one mom-to-be’s chalkboard of potential baby names gave rise to a torrent of people joking about how their names would have been spelled if their moms had favored similar spelling arrangements. This duo took it to the next level.

Sunglasses kid dancing in the club

An oldie but a goodie. This 1997 video of a kid in sunglasses unabashedly breaking it down at the club continues to feed the meme machine more than 20 years later. 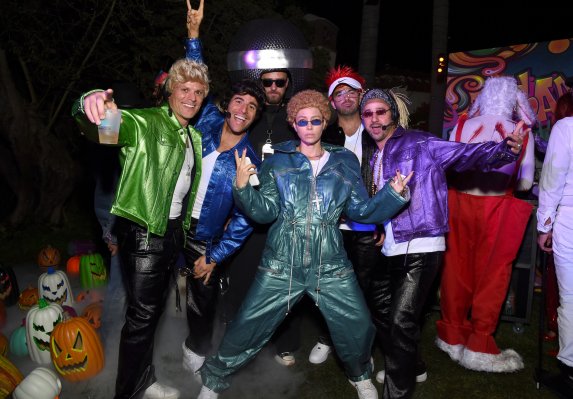 From the Ghoulish to the Glamorous, These Are the Best, Most Outrageous Celebrity Halloween Costumes of 2019
Next Up: Editor's Pick