As President Trump watched the Washington Nationals play the Houston Astros on Sunday night, not everyone in the crowd was happy with his presence.

During Game 5 of the World Series at Nationals Park in Washington, Trump was met with sustained baseball fans’ boos when the announcer introduced President Trump and First Lady Melania Trump during the game’s third inning. Some also chanted “lock him up!” — a play off of the “lock her up” anti-Hillary Clinton chant that became a common phrase at Trump rallies ahead of the 2016 election. Others in the audience cheered, according to Sunday’s White House pool reports.

In videos of the game, the President and his wife clapped and smiling, despite the chants. It’s unclear whether or not they could hear over the crowd from their box, where other GOP lawmakers, including Sen. Lindsey Graham, joined them. Some fans also held up signs reading “VETERANS FOR IMPEACHMENT,” according to CBS News.

It was a big day for the Trump administration. Trump had announced earlier that day that Abu Bakr al-Baghdadi, the leader of ISIS, had been killed.

But hours later, Trump stayed through the first seven innings of the game, CBS News reports. While Trump didn’t watch its ending, the Astros came out on top, beating Washington 7-1.

Trump’s appearance at the game was his first major league game since he took office. In 2017, Trump reportedly declined an invitation to throw out the first pitch for a Nationals game, a White House tradition dating back to President William Howard Taft’s Nationals pitch in 1910.

Nationals principal owner Mark Lerner told the Washington Post that he did not invite Trump to throw out the first pitch at Sunday’s game, but that the President had “every right to come” to the game. 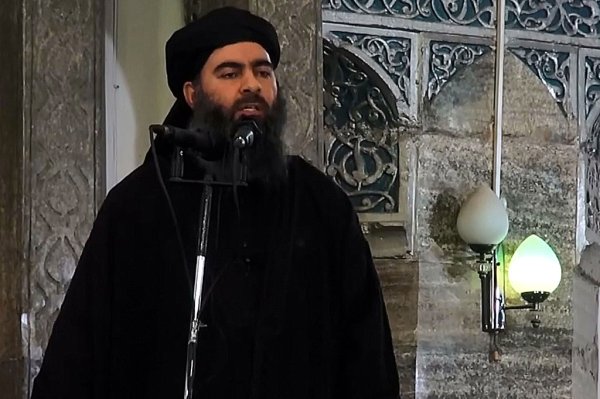 'He Died Like a Dog'
Next Up: Editor's Pick