Abu Bakr al-Baghdadi was “was scared out of his mind,” “a coward,” and he “died like a dog,” President Donald Trump told the country from the White House on Sunday. “He died after running into a dead-end tunnel whimpering and crying and screaming all the way,” Trump said, adding that the Islamic State leader took three children into the tunnel with him, and killed himself and the children by detonating an explosive vest and collapsing the walls around them. The American commandos confirmed his identity and left with some of al-Baghdadi’s body parts, he said, adding: “There wasn’t much left.”

Trump spun shocking details and insults to describe al-Baghdadi’s final moments, deploying signature bombastic flourishes and drawing a stark contrast to Barack Obama’s just-the-facts telling of the killing of Osama bin Laden during a nighttime raid into Pakistan in 2011. His remarks, given from a formal and familiar lectern in the White House Diplomatic Room, broke with the traditional somber mood Presidents have put on for decades when addressing the nation after a deadly military operation.

Trump was doing more than running down an adversary; he was actively trying to break the spell al-Baghdadi holds over his followers, says a White House official. “He felt it was important to mock this guy,” the official says, adding that Trump wanted to “rub in everybody’s face that this guy was killing and ordering rape of thousands of people and at the end of the day blew himself up with his three kids rather than fight.”

Roger Cressey, a former senior White House counterterrorism official in the Bill Clinton and George W. Bush administrations, tells TIME that the 48 minutes of Trump speaking and answering reporters’ questions was “uniquely Trump” and “unlike any other president announcement.” And even though Trump was clearly drawing on his “flair for the theatrical,” Cressey saw a deeper method: “He was trying to do something we’ve done in the past, which is demonstrate that the leaders of Al Qaeda and ISIS are not courageous and they are not people who should be followed.”

These terrorist leaders try to cultivate an image of themselves as courageous and pious. U.S. intelligence officials have tried historically to “debunk that myth with some factual elements,” Cressey says, as in when the Obama administration released information about pornographic materials found in Bin Laden’s compound.

But by denigrating al-Baghdadi after his death, Trump was going a step farther, breaking with a strain of thought among long-time counterterrorism leaders that the U.S. should stand for human dignity and not degrade its enemies, no matter how gruesome and heartless their acts are.

“These people are criminal, they are wrong at what they do, they don’t have respect for human life, they should be brought to justice. What I don’t understand is why we need to get down in the gutter and use this kind of language. I don’t think it is American,” says Daniel Benjamin, the Coordinator for Counterterrorism at the State Department from 2009 to 2012 and currently the director of the Dickey Center at Dartmouth. “I think it is beneath us all.”

American officials involved in planning and overseeing the raid that killed Bin Laden tried to have Bin Laden’s remains handled according to Muslim traditions, says Nicholas Rasmussen, a long-time counterterrorism official who was director of the National Counterterrorism Center from December 2014 to December 2017. Instead of returning Bin Laden’s body to his family for burial, however, Bin Laden’s remains were slid off an American warship into the Arabian Sea, so there would be no grave site that could galvanize his followers. There was also a concerted effort not to use inflammatory language in how officials described the raid. “I remember at the time of the Bin Laden raid, we talked about what we should do to not inflame passions among the population we seek to make inroads with,” Rasmussen says.

But Trump has decided not to hold back. “The thug who tried so hard to intimidate others spent his last moments in utter fear, in total panic and dread, terrified of the American forces bearing down on him,” Trump said, describing those drawn to follow al-Baghdadi as “losers” and “savage monsters” who will not escape “the final judgment” of God.

David Gomez, a former senior FBI agent who ran counterterrorism for the FBI’s office in Washington State until retiring in 2012, wondered if Trump was exaggerating for effect about what he knew of al-Baghdadi’s last moments. “I think the statement about his crying was Trump playing to his own ego,” Gomez says. “As someone who has been in a lot of those fast-moving situations, it’s highly unlikely anyone would have seen that if it had occurred,” he says.

When Trump was asked by a reporter if he heard al-Baghdadi whimpering through a live video stream, he said, “I don’t want to talk about it, but he was screaming, crying, and whimpering. And he was scared out of his mind.”

In Trump’s mind, al-Baghdadi is perhaps “the biggest” terrorist the U.S. has ever caught, overshadowing the raid that killed Bin Laden. The world is a “much safer” place with al-Baghdadi dead, Trump said. “This is the biggest one, perhaps, that we’ve ever captured, because this is the one that built ISIS, and beyond, and was looking to rebuild it again,” he said.

But Michael Downing, former head of the Counter-Terrorism and Special Operations Bureau for the Los Angeles Police Department, who has studied the organizational structure of the Islamic State for years, says it likely has a replacement already. “They are going to remain strong and they are going to continue attacking the West,” Downing says. “Now is one of the most dangerous times. When you injure an animal, that is when it is most dangerous.” 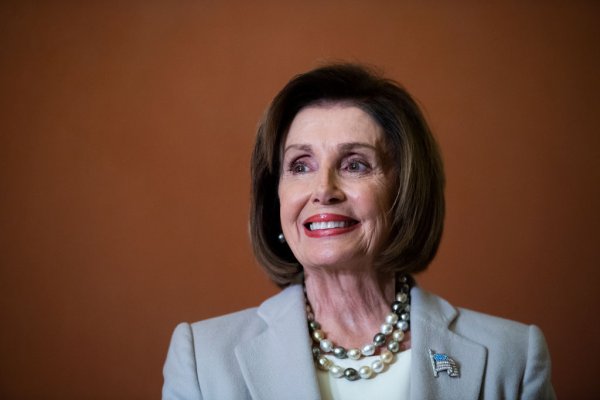 Pelosi Visits Iowa to Discuss the Impeachment Inquiry
Next Up: Editor's Pick