The Diary of a Teenage Girl Should Be Required Viewing

Bel Powley poses for a portrait during the Sundance Film Festival on January 23, 2015 in Park City, Utah.
Larry Busacca--Getty Images
By Eliza Berman

The first time Minnie Goetz (Bel Powley) has sex, she marks her lover with an “X,” triumphantly drawn from her own blood. She commands him to take her picture, curious about what a 15-year-old teenager looks like moments after losing her virginity. Later that day, she walks with a skip in her step, noticing things she previously hadn’t—a jogger’s bouncing breasts, the way her own weight shifts as she saunters—as though she’s suddenly put on a pair of glasses that allows her to see the world in a whole new way.

But for all the excitement Minnie feels in this moment, there’s a darker way to read what’s just happened to the titular teenaged girl of The Diary of a Teenage Girl, Marielle Heller’s directorial debut, in theaters Aug. 7. Minnie’s first sexual experience was with her mother’s boyfriend, Monroe (Alexander Skarsgard), who is more than twice her age; until this encounter, he served as a kind of informal guardian. Her mother (Kristen Wiig) self-medicates with booze and drugs, regularly getting high in front of Minnie and her younger sister. The only responsible adult in the girls’ orbit is their ex-stepfather Pascal (Christopher Meloni), who lives across the country and, despite his good intentions, is unable to offer much meaningful support beyond the occasional check.

This tension between the newfound agency Minnie is discovering as a sexual being and some of the more disturbing features of that process of discovery courses through the movie at a steady hum. And what makes this movie stand out from the admittedly underdeveloped subgenre of films dealing with young female sexuality is its refreshing candor in relaying that tension. It is presented without judgment, with full agency in the hands of its protagonist and with a nuance rarely achieved among its predecessors.

When coverage of the Patty Hearst trial comes on the local news in the Goetz home, it is more than a subtle nod to the time (1976) and place (San Francisco). The family’s debate about whether Hearst was a victim or a willing participant in her own ordeal could just as easily have been about Minnie’s budding sexuality: Is she a victim of what she may someday perceive as trauma? Is she being controlled or is she in control?

The answer, as with many of the trials of adolescence, may rest somewhere in between. Since its warm reception at Sundance, The Diary of a Teenage Girl has been mostly described as an empowering tale of teenage female sexuality. It’s not hard to count the ways in which the film normalizes and even celebrates teenage female sexuality: Minnie makes declarations like “I like sex” and thinks about it incessantly, embodying traits which cinema has historically associated with the teenaged male. When she sleeps with a boy from her school, she takes control, showing him how to do it so that she will feel pleasure.

But Diary’s empowerment does not derive solely from Minnie’s agency. It pulls from the moments of shame, disappointment and anger as much as it does from those of pride, satisfaction and joy. Empowerment comes from offering up a realistic portrayal of one young woman’s experience, to which another young woman watching might possibly relate. If you are a young woman whose sexual development has not been a path paved with roses, it is not empowering to watch a fictional tale that consists only of roses. It’s alienating.

It’s tempting to say that Diary is fresh because we are so accustomed to seeing sexual coming of age stories about heterosexual teenaged boys—Porky’s, Losin’ It, Superbad, American Pie—in which boy is subject and girl, consequently, is object. Certainly, the number of male-centric virginity-loss tales far exceeds the number about young women. But the latter do exist.

And they tend to go in one of two directions. There are those that present a young woman’s sexual awakening as a time characterized by danger and darkness. The 2009 British drama Fish Tank, in which a 15-year-old girl has sex with her mother’s boyfriend, could share a log line with Diary. But its protagonist is angry and isolated, and the encounter and its aftermath read more like the world-is-dark-and-cold kind of growing up than the world-is-magical-and-full-of-possibility attitude Minnie feels.

On the opposite end of the tonal spectrum, there are movies that take a more comedic approach to female sexuality. The To-Do List (2013), for one, stars Aubrey Plaza as a clueless high school grad preparing for college by checking sexual exploits off a list she keeps in her Trapper Keeper. They generally go humorously awry, though she picks up a sex-positive attitude along the way. Many that fall in this lighter camp feature a high school peanut gallery passing judgment on the protagonist’s exploits—the so-called slut, the nerdy virgin, the Christian saint a la Mandy Moore in Saved and Amanda Bynes in Easy A.

These movies are valid and important—for some young women, their first sexual encounters are damaging and painful, and for others, they are full of humiliating kerfuffles good for a laugh in later years. But in The Diary of a Teenage Girl, Minnie embraces sexual discovery head-on—not for laughs, and not to check it off a list. For her, sex is not the butt of a joke or a summons for danger or a stale right of passage. There is no peanut gallery to contend with, only her own sense of self and the fruits of her exploration, some juicy, some rotten.

And it’s not just teenaged girls who stand to benefit from such a refreshingly honest take on a subject that pertains directly to them. The non-teenaged, non-girl population—those who hold opinions about how teenaged girls should be, who influence access to birth control and sex education curricula, who weigh in on what defines consent and whose stories are believable—might walk away enlightened, as well. 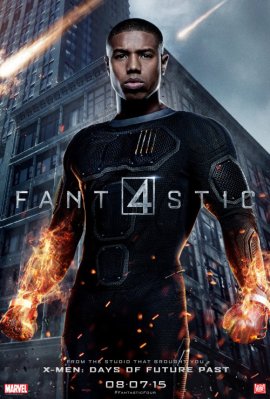 Here Are Some of the Roughest Critiques of Fantastic Four
Next Up: Editor's Pick