Addiction Is Hard to Talk About. That’s Why Steve Carell and Timothee Chalamet Wanted to Make Beautiful Boy

Steve Carell is a little nervous to talk about his new movie. Well, not nervous, exactly—maybe it’s more that he’s cautious. He’s not sure he’s the best person to speak on the subjects at hand, and if he’s going to, he wants to get the words just right. “Talking about the movie is almost as daunting as doing the movie,” Carell says. “You don’t want to speak as if you’re an authority.”

The movie is Beautiful Boy, out Oct. 12. It’s an adaptation of two memoirs. One was by a father, veteran journalist David Sheff, who wrote a book by the same name, about trying to guide his son through a harrowing drug addiction. The second book, Tweak, was by David’s son Nic; in it, he tells the firsthand story of his descent into addiction and efforts at recovery. Released simultaneously, both books became best sellers, and rightly so: taken together, they show the full scope of how drugs affect not only the addicted but their loved ones too: a 360-degree view of addiction as a family disease.

The movie, directed by Belgian filmmaker Felix Van Groeningen, synthesizes the two stories, with Carell as the embattled father trying to save his son, and Timothée Chalamet as the charismatic and manipulative young man who doesn’t know how to be saved.

Today the three of us are at Carell’s house in Los Angeles. Carell went out early to pick up breakfast for us and we’re sitting in a circle, drinking coffee and sharing with one another, which lends the interview the precocious intimacy of a 12-step meeting. When I talk about my own struggles with addiction as a teenager and eventual recovery, they both listen intently. They care deeply about whether someone who’s been through some of what this movie documents thinks they got it right. “When we were doing it, it felt like we were doing something real,” Chalamet says. “Not in the clichéd actor sense. But in a real sense.”

Addiction is very real to legions of people: approximately 20 million Americans meet the criteria for a substance-use disorder, and an estimated 72,000 Americans died from drug overdoses in 2017, a twofold increase in a decade as the opioid epidemic worsened. From 2010 to 2015, the number of drug-overdose deaths involving psychostimulants such as methamphetamine, a drug the real Nic used along with opiates like heroin, more than doubled. In one of Beautiful Boy’s most affecting scenes, David goes to see an addiction specialist (Timothy Hutton) to ask him for advice. As the doctor lays out the facts about how drugs affect the brain, it becomes clear that he’s not really offering options for treatment—he’s breaking the news to a father that his son’s chances at recovery aren’t high.

Yet, though you’re hard-pressed to find someone whose life hasn’t been impacted by it in some way, addiction remains misunderstood, sensitive and cloaked in secrecy—which is part of what drew both actors to the material. “We talk about drug abuse as a moral failing,” Chalamet says. “For us, that’s a hope for the movie: that it starts a conversation to see it not as a taboo.”

Beautiful Boy also manages to do something that most stories about addiction, with their typical arcs of redemption and sobriety, don’t dare to do: it gets a little frustrating. Nic’s relapses feel inexplicable. David wrings his hands with escalating helplessness. It hits the same notes repeatedly. But this helps the film actually get at the mysteries of addiction, and why treating it remains so challenging: Who can really say why addicts, particularly privileged ones like Nic with a loving family and access to top-notch resources, begin using again even after periods of remission? How can anyone who loves someone struggling with addiction possibly help them? The movie doesn’t try to solve the impossible why of the addiction epidemic—but it does provide a compelling snapshot of what makes it so heartbreaking and confounding. “In my understanding, that’s the reality of addiction,” Chalamet says. “It’s one day at a time. You’ve never really won the fight.”

He’s right. That is the reality of addiction, and it hit home for me as I watched the film and reflected on my own teenage years. The way Nic used drugs was familiar to me, but the way David tried to help him—I had never seen that before onscreen, not that convincingly. I thought about my own father, who had to put me through rehab more than once, and I felt embarrassed: not only for how impossible I’d been, but for how little I’d been able to understand how it had affected him.

Carell gets that. As a parent, he says, he could imagine the horror, rendered so vividly on film, of feeling like you’re losing your child in real time. “Being a dad, there’s an inherent worry you have as soon as you have kids that never goes away,” Carell says. “To experience them spiraling out of control with absolutely no recourse…” He trails off. “David was mourning his son while his son was still alive.” (The real Nic is now sober and a successful TV writer and producer; he worked on the Netflix series 13 Reasons Why.)

In the film, there’s a scene where David and Nic go surfing together; Nic dips under a wave, and for a moment, David thinks his son is gone. It’s a moment familiar to any parent, but especially harrowing to one dealing with forces as strong as the tide.

Chalamet connected to the themes of the movie too. Growing up in New York City, he says, he had a lot of friends struggling with addiction and pursuing recovery when they were, like Nic, still young. He’s unhappy with the way drug use has become, as he puts it, “masochistically glorified” in popular culture: “Young people have such disillusionment with our post-post-post-industrial world, where student debt is crazy and job opportunities are less afforded to people,” he says. “Opiates have become the drug of choice, as opposed to drugs in the ’60s like LSD that amplified your surroundings—-these are drugs that will numb you regardless of how terrible your environment is, and you’re guaranteed the same feeling each time.” Disappearing into this role was edifying, he says—it helped him see drug use as a process of seeking relief more than getting high. “There’s a misconception that addicts are using with a great amount of euphoria,” Chalamet says, “when in reality, they’re just keeping up a feeling, or avoiding reality.”

But we keep circling back to this same point: how hard it is to talk about this movie and the things in it, this movie that does such a fine job at showing how addiction shatters families it almost spooks you into reverent silence. “Clearly it’s important to us, or else we wouldn’t have done it,” Carell says. “But when you get the question, ‘Why should people see this film?’ How do you even respond to that? Because it’s compelling and emotionally resonant?”

“People are bracing for a really difficult ending,” Chalamet says. “Or something that ends with a flourish—a montage of hope or something. But this is just scene after scene where we tried to do it as diligently as possible.” He’s trying to get at something important here: the lack of resolution, the fragility of recovery, the impossibility of fixing it.

So of course it’s hard to talk about: because when you talk about addiction, there are, maddeningly, no satisfying answers. And even I, after many years clean and sober, never know exactly what to say about it. Which is both the challenge and the triumph of the film: it’s not a movie that claims, Hollywood ending and all, that the love of a parent is enough to save a sick kid. But it’s a powerful reminder that it’s worth trying. 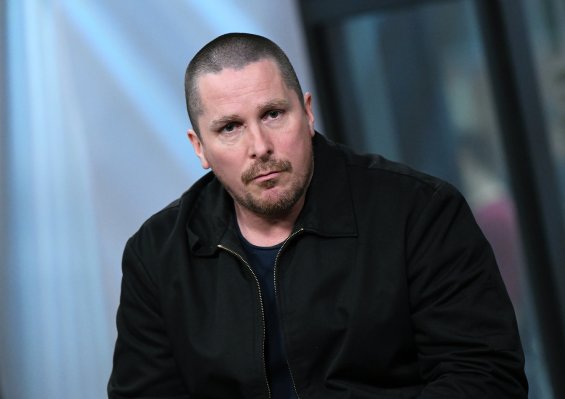 Christian Bale Is Fully Committed to This Dick Cheney Part and His Transformation Is Proof
Next Up: Editor's Pick