Trump's Doral Resort Will Host the G7. That Will Only Raise More Ethical Questions

Earlier this year, senior White House staff were briefing President Trump on plans to host the G7 summit in the U.S. when he piped up with a suggestion for the location to host the leaders of the six other major advanced economies. “What about Doral?” Trump said, raising the name of his Florida resort that is reportedly facing declines in revenue, according to a description of the meeting given by White House Chief of Staff Mick Mulvaney.

Now the White House has concluded that the Trump National Doral Miami golf resort is the “best place” in the country to hold the annual summit, which brings together leaders from Canada, France, Germany, Italy, Japan, the United Kingdom, and the United States.

“It’s not the only place, it’s the best place” for the meetings, Mulvaney told reporters at the White House on Thursday. “There are limitations at other places.” The White House considered twelve other resorts around the country, Mulvaney said, and concluded that Doral was “far and away the best choice.” Mulvaney said it would be “millions of dollars cheaper” to hold the summit at Doral over other locations. Doral will host summit “at cost,” he said. But it is unclear how the public will be able to assess that as the White House’s internal analysis will not be disclosed.

Mulvaney cited the physical layout of the resort, with separate buildings that could hold each country’s delegation, as a major factor in the White House deciding to host the event there. He said that the White House didn’t pick the resort because it may lead to future business that could enrich Trump. “Consider the possibility that Donald Trump’s brand is strong enough as it is,” Mulvaney said. “It is the most recognizable name in the English language and probably in the world.”

Trump has denied he is trying to profit from his time in office, repeatedly saying, without evidence, he’s losing billions of dollars while serving in the White House. But Trump has kept his finances opaque compared to past presidents and has refused to release his tax returns, so it is difficult to check his assertions.

Democrats have raised concerns that Trump has used his office to drive revenue to his businesses, pointing to hotel stays by foreign delegations at the Trump International Hotel Washington, as well as the publicity that follows when Trump regularly plays golf at Trump National Golf Club in Sterling, Va., his golf club in Bedminster, N.J. and his winter weekends at his Mar-a-Lago Club in Palm Beach, Fla. The top Democrat on the House Judiciary Committee, Jerrold Nadler, said the committee will investigate the White House decision to hold the G7 at Doral and whether Trump is using his office and making official U.S. government decisions for his personal financial gain. Such transactions could violate the emoluments clause of the Constitution.

“The Doral decision reflects perhaps the first publicly known instance in which foreign governments would be required to pay President Trump’s private businesses in order to conduct business with the United States,” Nadler said in a statement on Aug. 28, after Trump publicly said he wanted the summit held at his resort. 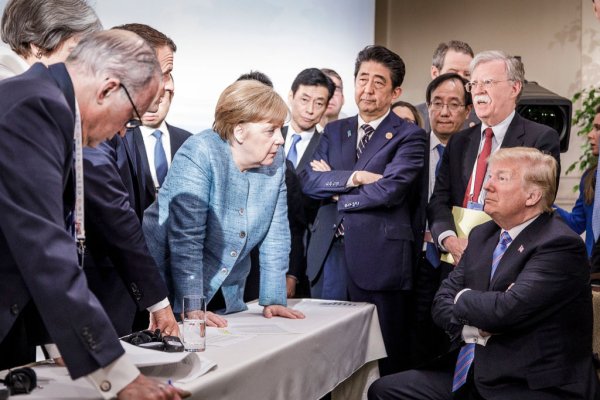 Leaders Arrive in Biarritz for the G7 Summit
Next Up: Editor's Pick