What Does the G7 Stand For?

Heads of state are meeting on Saturday for a two-day summit in the southern French city of Biarritz. President Emmanuel Macron is this year’s host and wants the meeting to focus on fighting inequality and protecting biodiversity and climate.

Here’s everything you need to know about the conference of world leaders.

What does G7 stand for?

G7 stands for “Group of Seven” industrialized nations. It used to be known as the G8 (Group of Eight) until 2014 when Russia was excluded because of its annexation of Crimea from Ukraine.

Why was G7 created?

The G7 was created more than four decades ago as an annual gathering of political leaders to discuss and exchange ideas on a broad range of issues, including global economy, security and energy.

France, Italy, Japan, the United Kingdom, the United States and West Germany formed the Group of Six in 1975 so that the noncommunist powers could come together to discuss economic concerns, which at the time included inflation and recession following an OPEC oil embargo. Canada joined the following year. Russia eventually joined in 1998 — and its inclusion was meant as a signal of cooperation between East and West after the Soviet Union’s collapse in 1991.

The G7 is an informal bloc and takes no mandatory decisions, so the leaders’ declarations at the end of the summit are not binding.

Which countries are members of the G7?

The group includes the United States, the United Kingdom, Germany, Canada, Japan, France and Italy. Together, the G7 countries represent 40% of global GDP and 10% of the world’s population.

This would have been Juncker’s last G7, as he is soon to be replaced by his successor, Ursula von der Leyen, following the European elections that took place in May. However, on Monday it was announced that Juncker will not travel to Biarritz for the summit since he needs to continue his recovery after having had emergency surgery at the weekend.

Why was Russia kicked out of the G8?

Russia was kicked out of the then G8 in 2014 after it annexed Crimea from Ukraine, which was seen by leaders as a “violation of Ukraine’s sovereignty and territorial integrity”.

President Barack Obama and other world leaders announced in a joint statement, titled The Hague Declaration, in March 2014 that they would cancel that year’s planned meeting in Sochi, Russia.

“Under these circumstances, we will not participate in the planned Sochi summit,” the statement said. “We will suspend our participation in the G8 until Russia changes course and the environment comes back to where the G8 is able to have a meaningful discussion.”

Speaking to reporters at the White House on Tuesday, a few days before his departure for the summit, Donald Trump said Russia should be allowed to re-join the G7 group. “I think it’s much more appropriate to have Russia in. It should be the G8 because a lot of the things we talk about have to do with Russia,” he said.

Next year it will be the turn of the United States to host the G7.

What’s the difference between G7 and G20?

They have similar names and similar functions. While the G7 mainly has to do with politics, the G20 is a broader group that focuses on the global economy. It’s also known as the “Summit on Financial Markets and the World Economy” and represents 80% of global GDP.

Founded in 1999 after the Asian financial crisis in 1997-1998, the G20 started off as a meeting of finance ministers and central bank governors. However, as a response to the financial crisis of 2008, the G20 was upgraded to head of state level in an inaugural summit in Washington, D.C. 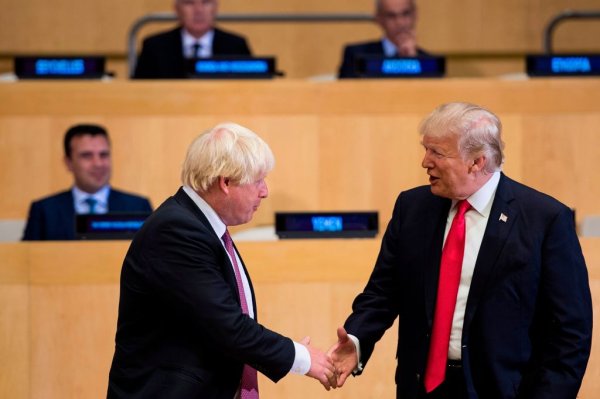 What to Expect of Britain's New Prime Minister Boris Johnson at the G7 Summit
Next Up: Editor's Pick