A scene from inside Donald Trump's Mar-A-Lago estate, during a benefit event in 1995.
Ron Galella—WireImage / Getty Images
By Lily Rothman

As Zeke J. Miller explores in a feature in this week’s issue of TIME, the story of President Trump’s “Winter White House” at Mar-a-Lago in Palm Beach, Fla., is a complicated one. But while Trump’s use of the club may present new challenges, the current President isn’t the first to see the exclusive enclave as a fitting retreat from Washington, D.C.

It was almost exactly 90 years ago, in early 1927, that the cereal heiress and philanthropist Marjorie Merriweather Post and her second husband Edward Hutton celebrated the completion of their new estate in Palm Beach. They named the place after its waterside location: Mar-a-Lago.

“Marjorie said she was going to build a little cottage by the sea,” Hutton was often heard to remark. “Look what we got!”

As TIME explained 40 years later, as Post remained one of the most important and most respected figures in the social scenes of several cities, she had turned the “115-room Spanish ‘cottage’ in Palm Beach” into a place known for “exquisite” hospitality, which was given an additional sheen of importance when John F. Kennedy—whose family had long wintered in Palm Beach—spent a few Christmas vacations in the area during his presidency. (The exact number of rooms has changed over time.) The place became a National Historic Site in 1969.

Post was famous for treating guests well, offering a full day’s worth of activities, brand new movies screened every night and, on one occasion, a special show from Ringling Bros. and Barnum & Bailey circus. And so, given her wide experience as host and guest, it is perhaps unsurprising that she came to feel that it was a shame that the United States did not have an appropriate place to lodge visiting dignitaries outside Washington, D.C., or for Presidents to relax during the winter.

She decided that, upon her death, Mar-a-Lago would become the perfect solution to that problem.

In 1972, after she agreed to include a fund for the upkeep of the place, that plan became official, as TIME reported when Post’s decision to donate the place to the U.S. government got Congressional approval:

Though there was no question that the gift was a large one, the magazine noted that it “seems designed to make the isolation of the presidency a bit more splendid than it ought to be” and suggested that, if he were going to spend time at Mar-a-Lago, a President ought perhaps to also spend “at least a few weekends a year in a trailer camp or a slum, or sleeping on a relative’s Hide-a-Bed in East Lansing.” (One reader responded to the article to propose that it should go vice versa too: every American who lives “in a slum or a trailer park or sleeps in relatives’ Hide-a-Beds during the year” should be entitled to a weekend spent there in the lap of luxury.)

When Post died the following year, the provision kicked in.

Though Richard Nixon paid a surprise visit to check it out, before long it was clear that, without Post, Mar-a-Lago had gone from being the jewel of Palm Beach society—home to 10,000 potted plants—to a veritable white elephant. Few officials had made use of the presidential retreat, as its grounds fell into disrepair. Despite the additional annual $100,000 put forward by Congress starting in 1980 and the funds provided by Post’s will, maintaining the place was an enormous onus that the federal government could ill afford, and eventually the 1972 order was repealed and the estate was deeded back to the Post Foundation.

Subsequently, in 1986, the Foundation sold the property to Donald Trump.

By 1990, however, in dire personal financial straits, Trump was reported to be offering the place in the neighborhood of $30 million. It didn’t sell, and a subsequent plan to divide the estate into smaller parcels was resisted by town officials, leading to a dust-up after Trump made an unfounded claim that the Unification Church of America would buy the property if he couldn’t split it up. Finally, in 1993 he was granted approval to turn the home into a private club, which it remains to this day.

In 1999, when he made news for forming a presidential exploratory committee — the first step toward running for President — he found that owning Mar-a-Lago wasn’t such a burden anymore.

“He boasts that he already owns the southern White House, which means he won’t be mooching off rich friends on Martha’s Vineyard,” TIME’s Margaret Carlson reported, when he explained that he knew that Mar-a-Lago had been “willed to the government to be used by Presidents.” 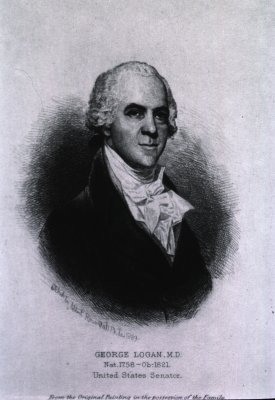 There's a Law That Keeps U.S. Citizens From Negotiating With Foreign Powers. Here's What to Know About the Logan Act
Next Up: Editor's Pick