G7 Ends With Whispers of a U.S.-Iran Meeting. Here’s Everything to Know

The last day of the 45th annual Group of 7 Summit, or G7 for short, featured France trying to de-escalate tensions between the United States and Iran, discussions of the U.S.-China trade war, and a new initiative to fight fires in the Amazon.

For three days, U.S. President Donald Trump and other leaders from the U.S., Canada, U.K., France, Italy, Germany and Japan, as well as top European Union officials, have been meeting in the French seaside town of Biarritz to discuss global challenges involving foreign policy, the economy and the environment. The aim of the annual meeting between top world economies is to shape their responses to urgent global challenges.

On Monday, French President Emmanuel Macron called on the United States and Iran to begin talks for a new nuclear agreement.

President Trump also called for Russia to re-join the G7, and said in a press conference that “it would be better to have Russia inside the tent than outside the tent.” Russia was removed from the group, then called the G8, following its annexation of Crimea in 2014.

Trump also floated the idea of holding the next G7, which U.S. is set to host, at the Trump National Doral Miami Golf Resort in Florida.

Here’s what else you need to know about the G7, which brought together leaders from some of the most powerful economies in the world.

Prior to the summit, there were signs that President Trump’s attendance at the summit could be fraught. At last year’s summit in Quebec, Donald Trump clashed with other world leaders, highlighting differences between the U.S. and the rest of G7 members. Trump created even more tension last year by leaving early ahead of climate change talks and refusing to sign the final communiqué, an agreement statement signed by the heads of state. To avoid another dispute, French President Emmanuel Macron said this year’s meeting would end without a communiqué, abandoning a tradition held since the G7 meetings began in 1975.

This year, there were also doubts that he would attend at all after he failed to confirm his attendance in a meeting with French President Macron in June.

However, Trump struck a positive note at a lunch with Macron on Saturday, noting that two of them have been “friends for a long time.”

“Everybody is getting along. And I think we’ll accomplish a lot this weekend, and I look forward to it. And thank you for having us,” Trump said.

Speaking to reporters in the Oval office on Tuesday, just a few days before departing for the summit in France, President Trump said that Russia should be readmitted to the G7.

“I think it’s much more appropriate to have Russia in,” he said. “I could certainly see it being the G8 again.”

Trump made similar comments before last year’s meeting, and they were not well received by other leaders of Europe, Canada and Japan, who mostly rejected Russia’s return. Moscow was excluded from what was then the G8 in 2014 for its annexation of Crimea from Ukraine.

What are the big issues at this year’s G7 summit?

As this year’s host, Macron has chosen to focus this year’s summit on the issue of reducing inequality, and has invited the leaders of Australia, Burkina Faso, Chile, Egypt, India, Senegal, Rwanda and South Africa to open up the discussion with other countries.

However, the summit is more likely to once again highlight transatlantic rifts over trade, Iran and climate change. Macron wants to focus on easing tensions between the U.S. and Iran that have been escalating since Trump pulled the country out of the Iran nuclear deal last year and reinstated economic sanctions.

While traveling to the summit, British Prime Minister Boris Johnson criticized the U.S.-China trade war and said he wanted to see the countries lift their tariffs.

“This is not the way to proceed. Apart from anything else, those who support the tariffs are at risk of incurring the blame for the downturn in the global economy, irrespective of whether that is true,” Johnson said, according to the Guardian.

The fires raging in the Amazon also now appear to be at the top of Macron’s agenda. “Our house is burning. Literally,” the French president tweeted on Thursday. “The Amazon rainforest – the lungs which produces 20% of our planet’s oxygen – is on fire. It is an international crisis. Members of the G7 Summit, let’s discuss this emergency first order in two days! #ActForTheAmazon.”

His comments were not well received by the president of Brazil. The country’s far-right leader Jair Bolsanaro replied in a tweet that Macron’s suggestion that the Amazon should be discussed at the G7, which Brazil does not attend, evokes “a misplaced colonialist mindset”.

The summit will also be an opportunity to address what Macron has called a “very profound crisis of representative democracy” in Europe. He has called for leaders to defend multilateralism and “not leave it to nationalists.”

Police fired a water canon at a group of around 400 ant-capitalist protesters in the town of Bayonne, France near the summit, the Associated Press reported. Several protesters threw rocks at police, and protesters had been blocking a road, but the gathering had peaceful overall.

Riot police also fired tear gas at activists in a confrontation in Urrugne, France near the Spanish border on Friday night, and 17 people were arrested for covering their faces and unauthorized gathering, the Guardian reported. The clash reportedly occurred at the edge of a camp for people attending an alternative summited on the environment. Four police were reportedly injured in the incident.

Earlier on Saturday about 9,000 people from different countries took part in a peaceful march from Hendaye, France to Irun, Spain to protest the summit, according to the Associated Press. Demonstrators expressed their support for climate change action, free trade deals, indigenous peoples and other matters.

At a G7 climate session on Monday, France’s Macron announced a new global emergency fund to help South American countries affected by the fires in the Amazon, which has experienced a record number of blazes in 2019.

Macron said the G7 countries would allocate $22 million to provide logistical and financial support to help fight the fires.

Macron and Brazilian President Jair Bolsonaro publicly fought over Brazil’s policy towards the Amazon just last week. Macron tweeted that the fires are “an international crisis” and should be discussed by the G7. Bolsonaro responded that involving the G7 in Amazonian issues “evokes a misplaced colonialist mindset in the 21st century.”

While Trump reportedly did not attend the climate session, Macron told reporters that “we shouldn’t interpret the absence of U.S. President Donald Trump any differently than due to the fact of him having bilateral talks at the time of the session.” White House Press Secretary Stephanie Grisham reportedly told reporters that a senior member of the administration attended in Trump’s place.

In a Monday meeting with Egyptian President Abdel Fattah el-Sisi, Trump told reporters that “China called” the U.S.’s “top trade people” Sunday night and asked to restart trade negotiations. He said the message was, “let’s get back to the table.”

According to The New York Times, China’s top trade negotiator Liu Hu said Monday that “we are willing to resolve the issue through consultation and cooperation with a calm attitude.”

Trump later told reporters that he thought China was sincere about wanting a new trade deal.

Possible thawing between the U.S. and Iran?

At a joint press conference with Trump, Macron called on the U.S. and Iran to meet and discuss a new nuclear deal.

“At a given point in time there will have to be a meeting between the American and Iranian president and I would wish that in the coming weeks such a meeting take place,” Macron said.

Macron also said both he and Trump agreed that Iran “must never have nuclear arms.”

While Trump did not say if he agreed to meet with Iran, he did say he was not hoping for “leadership change” within the country, and rather wanted to see “no nuclear weapons, no ballistic missiles and a longer period of time.”

“I think there’s a really good chance that we would meet,” Trump added.

Tensions between the U.S. and Iran have escalated over the past few months. Iran reportedly shot down a U.S. drone earlier in the summer, and the U.S. responded with new economic sanctions. In 2018, the Trump administration pulled out of an Obama-era nuclear deal with Iran that aimed to limit Iran’s nuclear capabilities in exchange for loosening sanctions.

While Trump and Zarif did not meet, per CNN, French minister Jean-Yves Le Drain said that wasn’t why France invited Zarif.

Trump told reporters that Macron had “asked” him about inviting Zarif, and he didn’t “consider that disrespectful at all.”

Write to Julia Webster at julia.webster@time.com and Madeleine Carlisle at madeleine.carlisle@time.com. 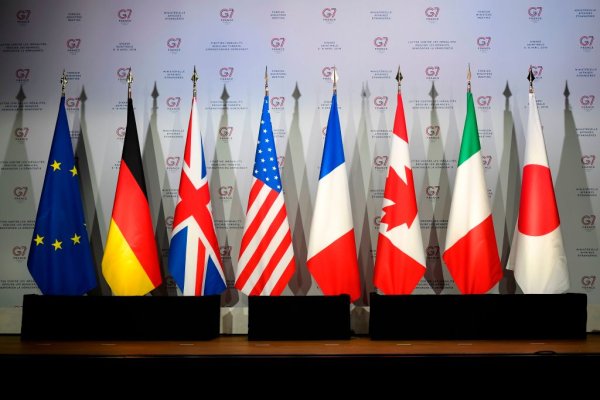 What Does the G7 Stand For?
Next Up: Editor's Pick