The 20 Best Halloween TV Episodes of All Time

Halloween, for all its spooky charms, can be an overwhelming holiday. There’s the anxiety of finding a good costume, the pressure to brave fearsome things like haunted houses and scary movies and, of course, the struggle to nab the best candy.

Those looking for a more low-key way to celebrate fall’s most thrilling holiday can (and should) indulge in a binge of TV’s best Halloween episodes. After all, the holiday has inspired some of the most memorable holiday specials. Who could forget the classic Friends episode in which Monica and Chandler host a drama-filled costume party with ruthless arm-wrestling competitions? Or the heartwarming proposals that take place in Halloween episodes of Parks and Recreation and Brooklyn Nine-Nine?

Here’s a run-down of the best Halloween TV episodes of all time, presented in alphabetical order.

“Fort Night” doesn’t rely on costumes, candy or any typical Halloween gags to bring the thrills for viewers. On the contrary: the Belcher kids, joined by their pals — the Pesto twins and Darryl — are foiled from getting the best candy in the neighborhood after they’re first trapped in their fort by a truck, then by Louise’s nemesis Millie. Eventually, the kids find their way out of the fort. Although they’ve missed out on trick-or-treating for the year, they still find a way to get their sugar fix with a well-deserved prank on Millie.

It’s no secret that the officers and detectives at Brooklyn Nine-Nine love Halloween — so much so, in fact, that they have an annual Halloween Heist in which the stakes are stacked for the precinct as they split into teams to either pull off or stop a scheme. For the fifth annual Halloween Heist, however, Jake (one of the tradition’s originators), uses the elaborate competition as a way to propose to his fellow detective, his partner and girlfriend Amy.

While a typical episode of Buffy is usually as scary as a Halloween episode of any other show, “Fear, Itself” really upped the ante for the gang as each of them faces his or her deepest personal fears while attending a frat party-turned-night of the living dead.

One of Cheers‘ long-running jokes came at the expense of postman Cliff’s love life, which is why “Fairy Tales Can Come True” is such a heartwarming surprise. In the episode, the regulars gather at Cheers, where Cliff, dressed as Ponce de Leon, amazingly hits it off with a woman dressed as Tinker Bell. While the two enjoy each other’s company so much that they close the bar down, they make plans to meet each other as their regular selves the next night. Both chicken out multiple times before they finally meet again — but when they do, it’s a romantic moment worth waiting for.

Larry David’s quirky neuroticism is on full display in “Trick or Treat,” when he refuses, as a matter of principal, to give Halloween candy to two teenage girls sans costumes. As might be expected, it ends in disaster, with the subsequent TP-ing and vandalism of his home being the least of his worries.

Frasier and Niles’ literary-themed Halloween party becomes the setting for a showdown between the brothers after a comic misunderstanding with Roz leads Niles to believe that the relationship between his brother and his one true love, Daphne, might be more than what he assumed.

Growing pains are rarely more visceral in Freaks and Geeks than in its Halloween episode, “Trick and Treats,” in which Sam and his friends attempt to return to the simple joys of their childhood by dressing up and doing one last round of trick-or-treating. Unluckily for them, however, they have a few challenges to contend with: a bully, and an unfortunate surprise encounter with Sam’s big sister Lindsay, out for a night of pranks.

Friends S8E6: “The One With the Halloween Party”

In “The One With the Halloween Party,” the gang gathers for a costume party hosted by Monica and Chandler, but the night takes a turn for the dramatic as many of the friends confront their own challenges. For Chandler, a pink bunny suit costume activates his sensitive nature, while Phoebe deals with the wiles of her evil twin Ursula. For Rachel, newly pregnant, trick-or-treaters seem like the perfect way to tap into her maternal side — but things don’t go quite as planned.

While this episode of Gilmore Girls could be seen as mostly a vehicle for Rory’s 21st birthday and the stress of her rift with her mom and best friend, Lorelai, it’s also an in-depth look at the extreme quirkiness of their town, Stars Hollow, and the way in which Halloween brings it fully to bear.

Glee‘s Halloween special had its characters re-enacting the campy 1975 cult classic The Rocky Horror Picture Show, with the students taking on the iconic roles of Dr. Frank-N-Furter, Janet, Brad and the rest of the cast, while Mr. Schue, Emma Pillsbury and her boyfriend Carl (played by guest star John Stamos) reckon with their love triangle. Fans of the original film were quick to notice that the original Brad and Eddie (Barry Bostwick and Meatloaf, respectively) made cameos in the special.

Meredith’s past comes back to haunt her as she feels her late mother’s presence in every situation, which she tries to remedy by bringing her mother’s ashes to the hospital. While Meredith eventually makes peace with her mother, a respected surgeon herself, by washing her remains down the surgery room sink, there’s a lot more happening at Seattle Grace this Halloween, including a man with a “haunted” foot, chainsaws galore and a little boy looking for a new pair of ears.

It’s Always Sunny in Philadelphia S6E7: “Who Got Dee Pregnant?”

The Always Sunny gang made good use of actress Kaitlin Olson’s real-life pregnancy to make a Halloween episode of epic proportions. And in typical fashion, nothing turns out as expected. While the episode aired during Halloween week, the actual episode doesn’t take place during Halloween, but in a series of flashbacks to a Halloween past. When the boys harass Dee for gaining weight, she casually informs them that she got pregnant at the last year’s Halloween party by one of them. The rest of the episode is a rollicking ride of each of their hazy perspectives and recollections, with a race to find witnesses who will give them accounts of what really happened that night.

When you’ve been on the air for as long as Modern Family has, there’s no shortage of Halloween episodes — especially when Claire Dunphy, Halloween enthusiast extraordinaire, is involved. However, it’s the show’s first Halloween episode that’s the most endearing as it establishes the Dunphy-Pritchard crew and all their eccentricities as they deal with Claire’s truly frightening Haunted House.

If there’s anyone who loves a theme, it’s Leslie Knope, but even the perky do-gooder of Pawnee couldn’t keep her spirits up during a costume party when she found out that her main squeeze Ben got a job offer that might threaten their relationship. Not to worry, however — the title’s “surprise” comes with a twist that’s sweet, not spooky, when Ben proposes to Leslie, solidifying their status as possibly the cutest power couple in all of Indiana.

Stranger Things deals in the business of otherworldly thrills, so it should come as no surprise that the show’s Halloween episode was extra spooky, filled with flashbacks to the Upside Down, vague rumblings of the Demogorgon and a mysterious creature found in a trash can. But one of the highlights of the episode is delightful rather than frightening: in keeping with the series’ general spirit of 1980s nostalgia, the boys adorably dress as the Ghostbusters for Halloween.

The Office has more than enough hilarious Halloween episodes, but “Costume Contest” might just take the cake for its wild levels of drama and aesthetic acrobatics. When a costume contest is announced, the Scranton staffers duke it out for best costume (can anyone ever forget Gabe dressed as a very tall, very glittery Lady Gaga?). But the competition for the costume contest isn’t anywhere close to the rivalry building between Michael and Darryl, making this episode one for the books.

The Simpsons S6E6: “Treehouse of Horror V, The Shinning”

No one does a Halloween special quite like The Simpsons, whose writers came up with their own campy genre name for the annual episodes: the “Treehouse of Horror.” The show’s sharp humor and sense of satire are honed most exquisitely in “Treehouse of Horror V: The Shinning,” a brilliant spoof of The Shining, in which Homer goes crazy like Jack Nicholson’s Jack Torrance. Unlike Jack, however, he loses his mind due to not having any cable or beer, which is pretty on-brand.

While The Twilight Zone didn’t have any designated Halloween specials, the series has become a go-to for Halloween enthusiasts, with marathons often scheduled ahead of the holiday. One of the episodes most cited for embodying the eerie quality for which the show is remembered is “Living Doll,” a harrowing tale about a doll out for revenge against a cruel man. Annabel is shook! 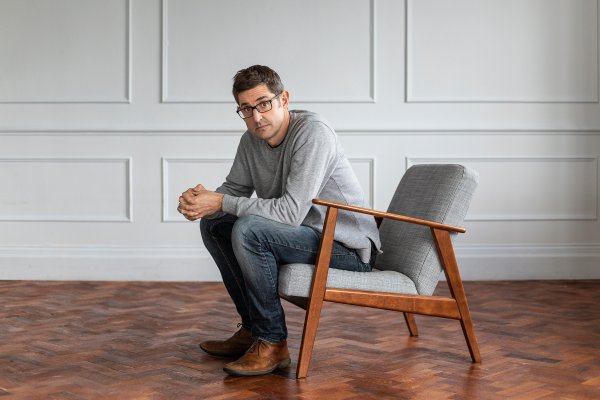 Louis Theroux, Britain's Documentary Trailblazer, Turns the Spotlight on Himself
Next Up: Editor's Pick