Oh, October: a lovely time for carving pumpkins, enjoying seasonal beverages and popping by a haunted house to get in the Halloween spirit. So of course Ellen DeGeneres decided to send her friend Chrissy Teigen on a mission to the Purge Maze at Universal Studios’ Halloween Horror Nights alongside her executive producer Andy Lassner, whom DeGeneres insists on making face his fears every year with various celebrity pals as his sidekick. (Two years ago, Ariana Grande joined him on his seasonal jaunt.)

Teigen and Lassner only have to make it through the dark, scary maze within for five minutes of frights, but that proves more than enough time for them to go from screaming to laughter to tears — and back again. And while Lassner may describe himself as an “alpha” — “You follow my direction,” he insists, while pushing Teigen through the creepy interior — it’s Teigen who’s clearly in charge here, even comforting Lassner with a maternal hug when things get especially frightening.

Model, cookbook author and Twitter icon Teigen is known for her expressive reactions, and this haunted tour proves a perfect platform for her to show off the full range of fear. Mannequins turning into murderous, living threats? Cleaver-wielding ghouls? Denizens of the dark that chase Teigen and Lassner all the way out into the light, even after they’ve exited the house? It’s all there. Thanks, Chrissy, for reminding us that haunted house are not for the faint of heart. 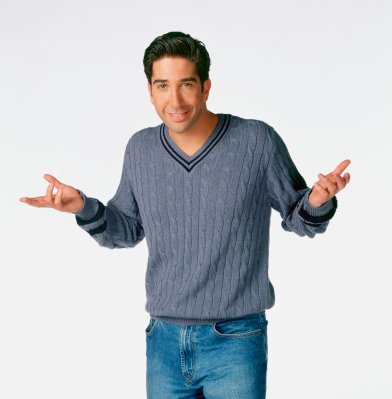 Police Are Looking For a Suspect Who Looks Exactly Like Ross From Friends and Is Always Stuck in Second Gear
Next Up: Editor's Pick