What Is Samhain? What to Know About the Ancient Pagan Festival That Came Before Halloween

Dressing up in costumes and trick-or-treating are popular Halloween activities, but few probably associate these lighthearted fall traditions with their origins in Samhain, a three-day ancient Celtic pagan festival.

For the Celts, who lived during the Iron Age in what is now Ireland, Scotland, the U.K. and other parts of Northern Europe, Samhain (meaning literally, in modern Irish, “summer’s end”) marked the end of summer and kicked off the Celtic new year. Ushering in a new year signaled a time of both death and rebirth, something that was doubly symbolic because it coincided with the end of a bountiful harvest season and the beginning of a cold and dark winter season that would present plenty of challenges.

According to historian Nicholas Rogers, author of Halloween: From Pagan Ritual to Party Night, Samhain was a “time of stock-taking and perhaps sacrifice” — including probably animal sacrifice — during which “pastoral communities [prepared] to survive the winter.”

Rogers also notes that little is firmly known about the particulars of the holiday, since the limited sources available are either folkloric literature like the Celtic sagas and Roman authors who would have likely “trashed” the traditions of a culture with which they were often in conflict.

To understand what we do know about Samhain, it’s important to recognize how the structure of the year’s calendar affected the Celts’ religious practices. According to The Guardian, much of modern pagan practice is based on the wheel of the year, a major determining factor in Celtic worship. The Celtic year was divided into two halves — light and dark, which were delineated by two of their four annual fire festivals. In between, rituals or ceremonies were celebrated marking solstices (when night is either the shortest or longest) or equinoxes (when day and night are equal). Samhain, the fire festival that marked the beginning of the dark half of the year, is situated between the autumn equinox and the winter solstice.

Encyclopedia Britannica notes that, during this festival, the world of the gods “was believed to be made visible to humankind,” leading to supernatural tricks and trouble; ghosts of the dead and spirits from the Otherworld were also thought to return to the earth during Samhain. To appease deities during this time, sacrifices (generally of crops and animals) were burned in bonfires as a protective measure from from evil otherworldly beings and offerings were left out for other visiting mischievous spirits. Tricks and pranks were often played, but blamed on fairies and spirits during the three-day period when the line between the two worlds blurred.

The spiritual undertones of the Samhain festival also lent themselves to looking to the future, an activity quite apropos to the start of the Celtic new year; History.com notes that Druids, or Celtic priests, thought that “the presence of otherworldly spirits made it easier…to make predictions about the future.” At the bonfires of the festival, fortune-telling was done alongside sacrifices, and many participants also donned costumes, often masquerading as animals or beasts, in hopes of fooling spirits who might want to harm them.

The practices of this fire festival evolved over time — most notably with the spread of Christianity and the Catholic church, by 43 A.D., following Rome conquering most of the Celtic lands. In Jack Santino’s Halloween in America: Contemporary Customs and Performances, he explains how, during this time, many of Celtic traditions were reframed with a Christian narrative in an attempt to capitalize on the popularity of the pagan practices while spreading the new religion. That reframing created many of the Halloween traditions that people still participate in today.

It was May 13 in the year 609 that Pope Boniface IV declared a celebration called All Saints’ Day, also called All-hallows or All-hallowmas in Middle English; the day before it was thus known as All-hallows’ Eve, as History.com explains. The festival was a day to honor Christian martyrs and saints. Later, in the mid-eighth century, Pope Gregory III strategically moved the celebration to November 1, coinciding with the time Samhain would have typically been held. The homage paid to martyrs and saints who passed closely paralleled the appeasement of ghosts of the dead during Samhain. The church’s capitalization on Samhain traditions didn’t end there, however; participants in the new version of the holiday celebrated in much the same manner as their Celtic forebears had — with bonfires and costumes that reflected the spiritual and otherworldly. The offerings of food and goods to protect themselves from spirits and ancestral ghosts became offerings of food and drink to the poor, displays of generosity and goodwill. And the tricks and pranks attributed to otherworldly and evil spirits manifested themselves in the spirit of the saints.

Eventually, All-hallows’ Eve evolved into Halloween, becoming more popular in secular culture than All Saints’ Day. The pagan-turned-Christian practices of dressing up in costume, playing pranks and handing out offerings have evolved into popular traditions even for those who may not believe in otherworldly spirits or saints. However, whether Halloween celebrants know it or not, they’re following the legacy of the ancient Celts who, with the festival of Samhain, celebrated the inevitability of death and rebirth. 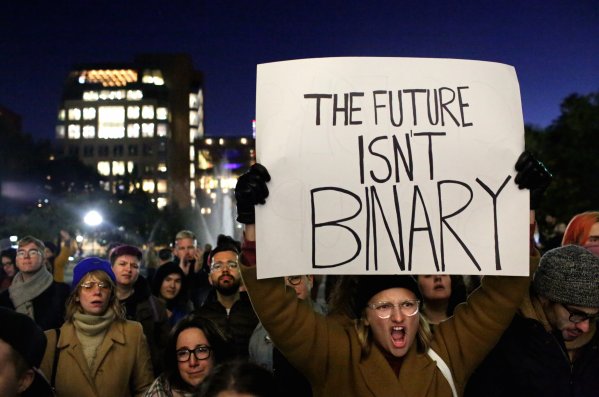 What Does It Mean to Discriminate Because of 'Sex?' How the Legal Meaning of That Word Has Evolved
Next Up: Editor's Pick