Hong Kong’s embattled leader faced a barrage of criticism Thursday night as she held a town hall-style meeting in her first overture to the public since pro-democracy protests erupted in the Chinese-ruled city nearly four months ago.

The over two hour-long dialogue, which at times descended into emotional tirades and salvos directed at the Beijing-backed leader, comes as Asia’s financial center is gripped by its greatest political crisis in decades. Businesses, especially tourism dependent sectors, have begun to complain of an economic sting as the protracted, sometimes violent upheaval scares off visitors.

As she met face-to-face with her critics, Hong Kong’s Chief Executive Carrie Lam pledged this was no “PR stunt.” Everyone in the course of these past few months has felt worried and anxious, she said, adding that the responsibility for resolving the unrest lies with her government.

Via lottery, 150 members of the public were invited to come and express their concerns. Speaker after speaker blasted Lam’s handling of the situation, questioned why the police were not being held accountable for perceived abuses against protesters and criticized the electoral system.

“We are really rather desperate,” one woman said, after insisting telling Lam, “You’ve caused hurt and disappointment.”

“Good leaders,” she added, do not “cause society to tear apart.”

“Even [Chinese President] Xi Jinping is ashamed of you,” another speaker said, according to local media.

Many of the three dozen or so attendees who were called on to speak urged Lam to step down. Others expressed uncertainty about how they could be expected to continue living with weekly pitched battles.

“I don’t know how to give this Hong Kong to the next generation,” one man said. “I’m very scared every weekend.”

Read more: Hong Kong’s Summer of Unrest Has Been Drawing Inspiration From Ukraine’s Winter on Fire

Millions of Hongkongers have joined the marches, rallies and demonstrations that have been roiling the semiautonomous enclave since June, though the movement has come a long way from the peaceful demonstrators that snaked through the skyscraper-laden streets with chants of, “Carrie Lam, talk to the Hong Kong people.”

The contentious extradition bill that initially catalyzed the dissent was withdrawn earlier this month. But the movement has since evolved into a push for outright democracy, or even independence, posing a direct challenge to the city’s political masters in Beijing.

The former British colony was retroceded to Chinese rule in 1997 under a handover agreement that pledged respect the city’s autonomy, independent legal system and freedom of expression. Protesters accuse the Communist Party of reneging on the deal and encroaching on the city. They have refused to call off the unrest until their additional demands are met, including fully democratic elections and an independent investigation into the police response.

At the public dialogue, several speakers reiterated this stance, citing the protesters’ slogan, “Five demands, not one less,” to rapturous applause.

Before Lam’s entourage arrived at the Wan Chai district stadium on Thursday, hundreds of demonstrators began amassing outside the venue. Secondary-school students formed human chains along the nearby shopping district and chanted, “Freedom for Hong Kong.”

Concerned about the possibility of disruptions, officials enforced tight security at the stadium, calling on participants to arrive and register two hours in advance and pass bags through scanners. Attendees were barred from bringing umbrellas, helmets or gas masks—all standard issue equipment at protests.

Earlier in the day, dozens of riot police were seen carrying shields, batons and what appeared to be tear gas cases into the venue. Local media reported that the police kept a “maximum reserve” of 3,000 officers nearby in case of clashes.

Weekends in Hong Kong, normally one of the world’s safest cities, now regularly feature street brawls between pro-democracy protesters and police. In response to an increasingly hardline knot of protesters hurling petrol bomb and setting fires in the streets, police have fired volley after volley of tear gas, bean bag rounds and rubber bullets. Last week, Amnesty International accused the force of being “reckless” and torturing people in custody, and called for independent inquiry.

“I don’t want to come out [and protest],” one of the dialogue attendees said in an emotional address at the end of the evening. “I want to have an enjoyable summer. But…I know I am the future generation…That’s why we stand out bravely.”

Thursday night’s dialogue comes three weeks after Lam agreed to formally scrap the bill which sparked the unrest. The contentious legislation would have allowed extraditions to mainland China for the first time. In an opinion column published in the New York Times Wednesday, Lam said her belated concession was necessary “to help create the atmosphere” for the community dialogues.

But the withdrawal did little to pacify simmering public anger. Critics called the move too little, too late.

Lam and Beijing have refused any further allowances, leaving it unclear how the stalemate will break.

The city is heading into its 17th consecutive weekend of protests with a packed agenda. On Saturday, demonstrators will mark five years since the pro-democracy Umbrella Movement seized the enclave. Then on Oct. 1, counter-rallies are planned to coincide with the Communist Party’s 70th anniversary of the founding of the People’s Republic of China, timing that could result in an embarrassment for Beijing if its celebrations are upstaged. 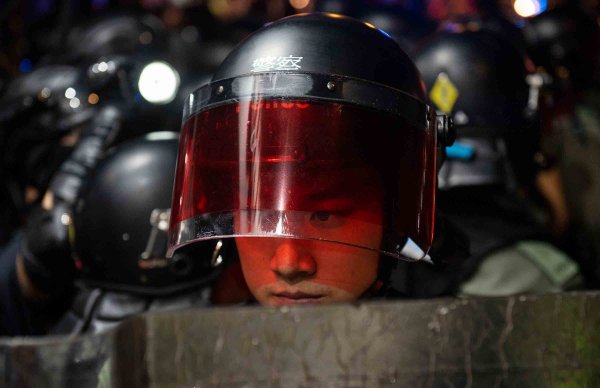 Will Unrest in Hong Kong Spoil China’s Big Party?
Next Up: Editor's Pick