Protesters in Hong Kong once again defied a police ban Sunday to march through the territory’s downtown districts in their push for greater political freedom, but what began as a peaceful demonstration quickly turned violent.

Shortly after the march began, protesters set up barricades on Harcourt Road, near the city’s legislature and main government offices, and hurled bricks and petrol bombs. Police responded with water cannon, rubber bullets, and tear gas, while the legislature was evacuated.

Local news broadcasts showed protesters burning the Chinese flag and tearing down and burning a large banner that had been erected to commemorate China’s upcoming national day on Oct. 1.

Protesters also vandalized subway stations, venting their fury at a train operator that they accuse of being in league with the the authorities by transporting riot police to demonstrations but shutting stations when protesters need to leave.

As the night wore on, there were reports of pro-government gangs armed with rods beating protesters in eastern districts of Hong Kong Island.

Earlier in the day, protesters waved the U.S. flag, and even banners for President Donald Trump’s reelection campaign, as they flooded the streets in their thousands chanting “Resist Beijing! Liberate Hong Kong!”

A few dozen protesters also gathered at the British consulate, waving Union Jacks and singing “God Save the Queen” as they petitioned Whitehall for assistance

“I guess this is our last hope,” said 46-year-old marcher Selina, in reference to the appeals to Western powers for support. “Maybe with Trump or American help we can stop the police violence.”

“Americans care about freedom and rights and somehow I hope America will help us,” echoed Jackie, a 21-year-old student.

Sunday’s demonstrations come after a day of brawls across the city between protesters and pro-Beijing groups that saw 25 people brought to hospital. A fire also broke out at the office of a pro-Beijing legislator.

Many protesters have threatened to escalate their campaign if the government does not meet their demands for, among other things, universal suffrage and an independent inquiry into what they say is the heavy handed way police have handled the demonstrations.

“When we say thing a quietly and peacefully and it doesn’t work you have to escalate,” Ken, a 46-year-old protester, told TIME. “We have no choice; give us a better choice.”

Semi-autonomous Hong Kong has been roiled by more than three months of unrest, which began as a series of demonstrations against a now withdrawn extradition bill. The movement quickly escalated into a full blown campaign for genuine democracy, with calls for the city’s leader to be elected by universal suffrage instead of the small and carefully vetted electoral college that decides the appointment at present.

In recent weeks, calls for self-determination and even independence for Hong Kong have started to grow, leading a furious Beijing to denounce the protests as a separatist, color revolution.

Hong Kong was retroceded to China in 1997, after 156 years of British rule, but it’s 7.2 million people remain culturally and linguistically distinct from mainland Chinese. 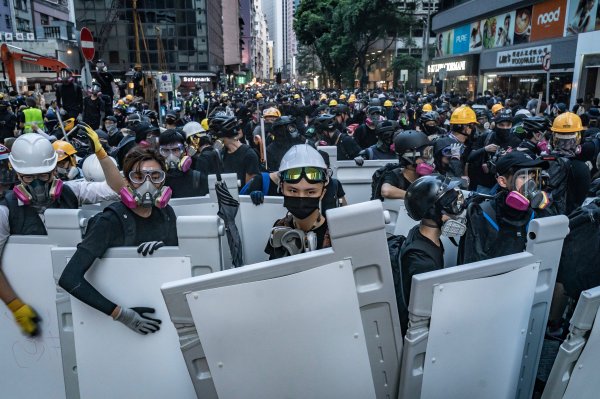 The Story Behind Hong Kong's New 'National Anthem'
Next Up: Editor's Pick