Just outside a Hong Kong subway station, dozens are gathered around a projector screen, transfixed. They watch footage of riot police advancing towards protestors. After 16 weeks of protests, many in the audience know this type of scene well.

They are gathered — along with people at about a dozen street corners, parks and other public spaces across Hong Kong — for screenings of Winter on Fire: Ukraine’s Fight for Freedom, an Oscar-nominated documentary about Ukraine’s anti-government protests of 2013. The three-month-long protest, centered on a square in the capital Kyiv, successfully toppled the country’s pro-Russia leadership.

Hongkongers are drawing parallels between the Euromaidan movement, as Ukraine’s uprising was called, and their own struggle for democracy. Both were sparked by a single controversy — in Hong Kong, a detested (and now withdrawn) extradition bill, in Ukraine, the president’s refusal to sign an association agreement with the European Union. But each quickly snowballed to include much broader demands for greater political freedom.

The overall political situation in the movie resonates with Hongkongers, as Kenneth Chan, a political science professor at Hong Kong Baptist University points out.

“Ukrainian protestors felt that their leaders were puppets of the Russian government, in the way that many in Hong Kong see theirs as puppets of Beijing,” he tells TIME.

The pace of both movements also has similarities.

“The way the protests developed in Ukraine is very similar to in Hong Kong, starting out peacefully and then becoming more and more radical and extreme,” says Hansa, a 23-year-old protestor who organized a screening of Winter on Fire, and who, like many here, believes that Euromaidan is a case study to learn from.

There are other parallels. The white-shirted gangs and other pro-government groups beating up democracy protesters in Hong Kong have incited comparisons to Ukraine’s titushki — hired thugs who, Winter on Fire, are shown joining forces with the police.

The phrase heard throughout the movie, “Glory to Ukraine,” may have even inspired “Glory to Hong Kong,” an original song that was produced by singers, instrumentalists and sound engineers collaborating online. Some have branded it Hong Kong’s new “national anthem.”

It’s little wonder that the director of Winter on Fire, Evgeny Afineevsky, penned an open letter of encouragement to Hong Kong’s protestors, declaring that “hope truly lies in the hands of today’s younger generations.”

Many of the city’s activists are certainly taking inspiration from Afineevsky’s work.

“Winter on Fire shows us that we may suffer difficulties now, but success will finally come if we insist on the fight. It inspires us to continue,” says Isaac Cheng, vice-chair of Demosisto, the political party founded by Hong Kong’s youthful democratic figurehead Joshua Wong.

Some have blamed the film — with its graphic scenes of protestors burning tires and setting the city center ablaze — of radicalizing protestors. In a recently published op-ed pro-establishment lawmaker Regina Ip wrote: “The forces driving the widespread upheaval are complex. We have young protesters imagining themselves as agents of change, as in the documentary Winter on Fire: Ukraine’s Fight for Freedom.”

The accusation is rebuffed by the movie’s supporters.

“The focus of the film is not the violence or the rioting,” says Cheng. “It is the struggle for democracy, the care and love among protestors, and their willingness to sacrifice for their land.”

Other are meanwhile quick to point out that the use of force by Hong Kong police has been relatively restrained. In Ukraine, after tear gas and rubber bullets failed to disperse protestors, police used stun grenades and live rounds, with over almost 130 deaths recorded. In Hong Kong, live rounds have only been fired in warning (although one police association is beginning to advocate the use of live ammunition if officers continue to be attacked by protesters with petrol bombs).

The Hong Kong movement also looks set for a longer fight. The demonstrations came to an end in Ukraine after 93 days, when the country’s unpopular president, Viktor Yanukovych, fled to Russia and general elections were announced. Protests in Hong Kong have meanwhile surpassed their hundredth day and show no signs of abating. Perhaps Hong Kong’s summer of unrest will turn into its own winter on fire.

“Hongkongers need to be prepared,” a 38-year-old protestor tells TIME. “This is going to be a long, uphill battle.” 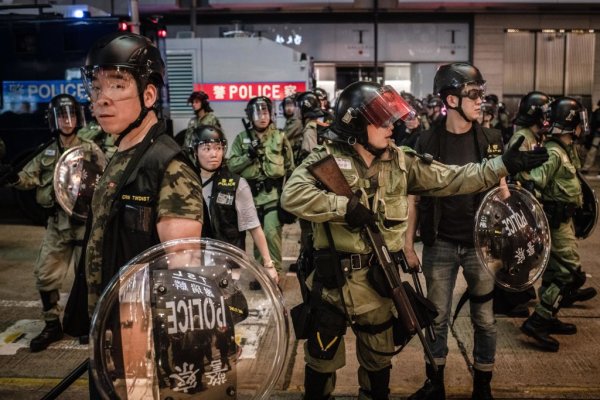