Ellen DeGeneres did some sightseeing during a trip to London this summer, but the real joy was spending time with the royal baby Archie Harrison Mountbatten-Windsor, the son of Harry, Duke of Sussex, and Meghan, Duchess of Sussex. It was a highlight to say the least. After all, who needs to go visit the London Eye or catch the changing of the guards when you’ve already held Queen Elizabeth’s great-grandson in your arms?

During the The Ellen Show season 17 premiere on Monday, DeGeneres told the audience about her summer spent traveling to Europe with wife Portia de Rossi, visiting Amsterdam and London, where they met Archie Harrison Mountbatten-Windsor and his parents. “Here’s a sentence I thought I would never say, but I spent the afternoon with Prince Harry and Meghan,” the comedian said in Monday’s episode.

DeGeneres said she had an amazing time with Prince Harry and Meghan, but nothing beat hanging out with Archie. “I mean, I can’t tell you how sweet [Harry and Meghan] are, but the most important thing is I got to hold little Archie, the baby,” she said. “I fed Archie, I held Archie.”

Snuggling with comedian DeGeneres for a playdate certainly seems par for the course.

Prince Harry, Duke of Sussex and Meghan, Duchess of Sussex, pose with their newborn son Archie Harrison Mountbatten-Windsor during a photocall in St George's Hall at Windsor Castle on May 8, 2019 in Windsor, England.
Dominic Lipinski—WPA Pool/Getty Images

Her afternoon in the U.K. was about more than just babysitting, though. DeGeneres said she discussed wildlife conservation efforts with Prince Harry and Meghan, highlighting their work with the non-profit Elephants Without Borders in Botswana. With The Ellen DeGeneres Wildlife Fund, her own conservation organization that works to help endangered species, the comedian said they hope to collaborate further in the future. “Portia and I talked to them about all the conservation they’re doing for wildlife, and they’re doing all this work in Botswana for elephants, and I love that, and they like what I’m doing for the gorillas in Rwanda, so we’re going to all do something together,” she said.

Beyond conservation, DeGeneres also had a message for critics of the royals. “I see them get attacked, and it’s not fair,” she said, echoing recent comments from Sir Elton John, who defended the couple’s use of private planes after news reports called their environmental efforts hypocritical. “They’re just two of the most down to Earth, compassionate people, they’re doing so much good for the world.” 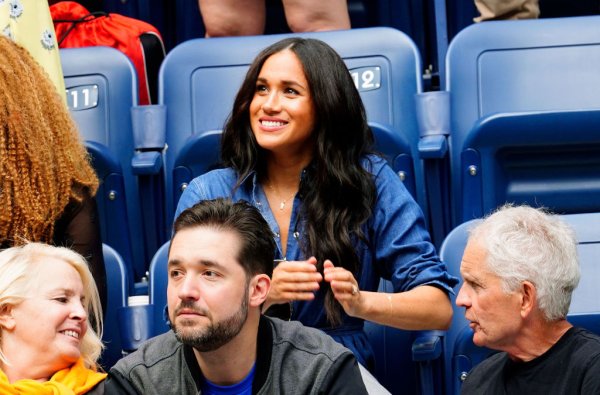 Meghan Markle Showed Her Support for Serena Williams at the U.S. Open Because Game Recognizes Game
Next Up: Editor's Pick