Sir Elton John spoke out against recent “malicious” press attention on Meghan, Duchess of Sussex, and Prince Harry, Duke of Sussex, during their private vacation at the singer’s home.

Last week, Prince Harry and Meghan Markle took their son, Archie, to stay in the Nice, France, home of John and his husband, David Furnish. The trip soon came under fire in British tabloids as photographs emerged of the royals disembarking a private jet. Publications like The Mirror and The Sun commented on the royals’ alleged environmental “hypocrisy” for using private jets and taxpayer-funded vacation flights.

“I am deeply distressed by today’s distorted and malicious account in the press surrounding the Duke and Duchess of Sussex’s private stay at my home in Nice last week,” the pop star said in an Instagram post and a series of tweets on Monday.

John protested the tabloids’ characterization of the couple’s trip as well as the intrusion into their private lives.

The Sun said that the Duke and Duchess had “been accused of hypocrisy after recently speaking out about environmental issues, and then using private jets for their jaunts around Europe.” The Mirror also estimated that the flight to France “belched seven times the emissions per person compared to a commercial flight.”

Prince Harry and Meghan Markle are both activists for the environment, conservation and slowing the effects of climate change through charities and patronages. It’s because of this that Prince Harry recently drew criticism for reportedly taking a helicopter as he headed to a Google summit on climate change in Sicily, Italy. British Labour MP Teresa Pearce told The Sun that the royals should “lead by example” on such issues and The Daily Mail said said some called him a hypocrite.

John asserted that he and his husband had provided the plane for the royals — so presumably no taxpayer money was involved — and the planes used carbon-neutral fuel to minimize the environmental impacts.

In his reaction, John also connected the press the couple received to Prince Harry’s late mother, Princess Diana, with whom the singer was close friends. He said: “I feel a profound sense of obligation to protect Harry and his family from the unnecessary press intrusion that contributed to Diana’s untimely death.”

Jurors ruled that Princess Diana was “unlawfully killed” in an Aug. 31, 1997, Paris car collision because of her chauffeur’s driving and paparazzi in pursuit of her car.

Still, according to Statista, the Duke and Duchess of Sussex did not have the highest travel expenses last year compared to other members of the British royal family. Their trip to Australia, New Zealand, Tonga and Fiji in October of 2018 was cheaper than three different trips taken by Charles, Prince of Wales, and Camilla, Duchess of Cornwall.

To close his comments, John highlighted the Sussexes’ “commitment to charity” and requested that the press “cease these relentless and untrue assassinations on their character.” 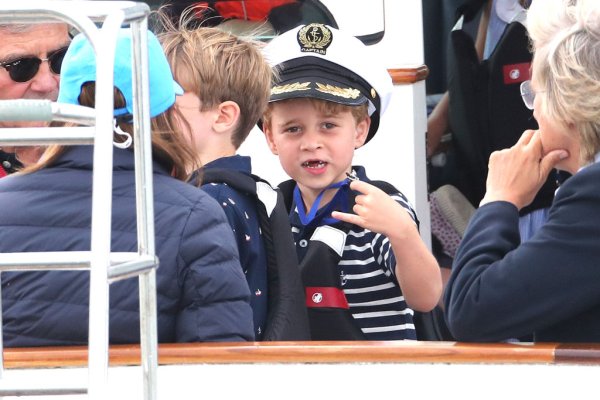 Come Sail Away With Seafaring Prince George in a Captain Hat
Next Up: Editor's Pick