The Duke and Duchess of Sussex, Prince Harry and Meghan Markle, shared the news Wednesday that they named their new royal baby Archie Harrison Mountbatten-Windsor, hours after introducing him to the public earlier in the day.

Unlike his cousins, Prince George, Princess Charlotte and Prince Louis — the children of the Duke and Duchess of Cambridge — Archie will not be a prince, and will likely be referred to as Master Archie as he grows up.

Prince Harry and Meghan Markle’s choice in name marks a step away from royal tradition and symbolizes an effort by the royal family to become modern, says Cleveland Evans, a former president of the American Name Society and psychology professor at Bellevue University.

The meaning behind Archie

Archie is the nickname for Archibald, a name that dates back to Middle Ages-era Scotland. Meaning “genuine” and “bold.” Archibald was an aristocratic name in Scotland, Evans says. It’s not exactly the same case with its diminutive, Archie, which is a wildly popular name in the United Kingdom, according to Evans.

In 2017, Archie was no. 18 on the top 100 boys’ names in England and Wales, he says. Similar sounding names like Alfie, Charlie, Freddie and Teddy have also ranked in the top name choices on the list.

“The choice definitely shows their personality, but also to a certain extent, the changes in the royal family as a whole, where things have become — especially since Princess Diana’s death — more open,” Evans says, referring to Prince Harry and Meghan Markle. “They probably want to modernize it and want the royal family to be seen as regular people, which is why they’d choose a name like Archie, which at the moment is a regular, everyday British boy’s name.”

The meaning behind Harrison

Archie’s second name, Harrison, which is typically used as a last name or surname, is also a bold choice for the royal couple, according to Evans. “It’s highly unique to the royal family that they would use something that is basically a surname as part of the child’s given name,” he says.

The name Harrison comes from an English surname that means “son of Harry.”

Harrison was no. 34 on the top 100 boys’ names for 2017 in England and Wales. In the U.S., the name has ranked at 148th among most popular male names from 2010 to 2017. Notable people named Harrison include the actor Harrison Ford, the former Beatle George Harrison and former U.S. President William Henry Harrison.

Prince Harry and Meghan Markle’s decision to stop at two names for the baby is also a rare choice—Archie’s prince and princess cousins each carry three names, while his father and uncle, Prince William, each have four. The practice of giving royal babies three or four names was part of a longtime tradition of memorializing or honoring others in the royal family, according to Evans.

Evans says that Americans are likely to be more surprised by the choice in name than Brits, because Archie is not a popular pick in the United States. The name has not appeared in the top 1,000 popular names in any year since 2000, according to the Social Security Administration. Americans are likely to be reminded of fictional characters like Archie Bunker of the 1970s sitcom All in the Family or Archie Andrews from the Archie comics.

But all told, Prince Harry and Meghan Markle have chosen a name that could help their son move easily among society’s ranks in the future, according to Evans.

“It makes them a part of the general British culture in that they have picked a name which is actually popular for babies in England at the moment,” he says. 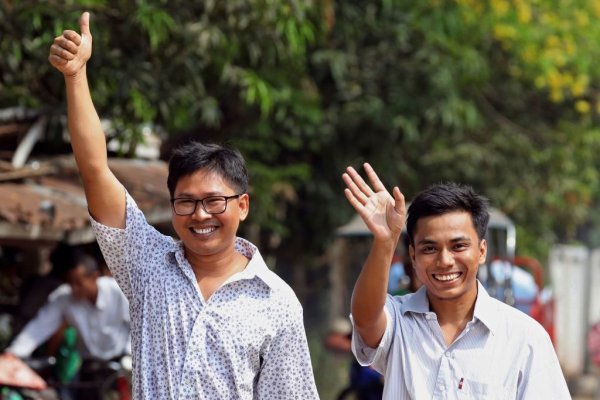 The Release of Reuters Journalists in Myanmar Is a Victory for Press Freedom. But the War on Truth Isn't Over
Next Up: Editor's Pick