Prince Harry launched a new green initiative Tuesday in Amsterdam that aims to improve sustainability in the tourism industry––amid controversy surrounding his use of a private plane.

Travalyst, an initiative that includes global partners such as TripAdvisor and Visa, is meant to incentivize “organizations and destinations to do right by the places, spaces and animals we all need to protect,” Harry said during a speech at the launch of the initiative. “By promoting and incentivizing sustainable decision-making, by helping us as consumers stay better informed, and by empowering communities, Travalyst will strive to change both the travel industry and the world for the better— and for the long term.”

After the speech, Harry defended is use of a private jet on a recent trip to Nice, France, telling reporters: “I spend 99% of my life traveling the world by commercial, occasionally there needs to be an opportunity based on a unique circumstance to ensure that my family are safe — it’s generally as simple as that.”

Harry and Meghan Markle faced criticism for their private flight to visit the home of Elton John. The couple, along with their son Archie, used a private jet for the journey and some British media outlets criticized the royals as hypocritical because of their activism on climate change. Private jets usually have a significantly larger carbon footprint per passenger than commercial flights of the same distance.

Elton John later said in a public statement that he funded the plane and ensured the flight was carbon neutral by making a contribution to Carbon Footprint, an organization that aims to offset carbon emissions through special projects like establishing clean water programs and efforts against deforestation.

Travalyst has been in the works for two years, according to Buckingham Palace. Other partners include Booking.com, Ctrip and Skyscanner. The partners aim to tailor sustainable tourism efforts to the needs of regions across the globe by measuring impact on a community level. “Communities will be at the center of everything we do and we’re not going to reinvent the wheel,” Harry said.

“What is clear across this vast landscape is that our world faces environmental challenges of unprecedented scope and scale,” he added during his speech Tuesday. “These human-caused challenges often need a giant system shift to make a significant enough impact. And that is what this partnership is here to try and do.” 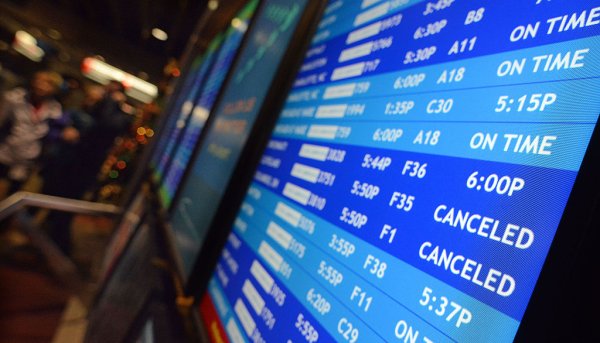 Traveling This Weekend? Here's What to Know About Hurricane Dorian
Next Up: Editor's Pick