Bianca Andreescu of Canada poses with the trophy after and with runner-up Serena Williams of the United States at Arthur Ashe Stadium at the USTA Billie Jean King National Tennis Center on September 07, 2019 in New York City.
TPN—Getty Images
By Sean Gregory

At the U.S. Open, the Arthur Ashe stadium crowd never ceases to insert itself into the action. Remember, for example, a year ago, when the angry fans — still ticked by a controversial call that took a game away from Serena Williams — booed while Naomi Osaka was receiving her first Grand Slam title trophy, creating one of the most uncomfortable sports moments of this century. During the second set of the women’s final on Saturday between Serena Williams, 37, and Bianca Andreescu, 19, of Canada, the crowd suddenly erupted in cheers as Williams was flailing, in a sort of desperate attempt to rescue her.

And for awhile, the roars worked. Trailing by a set and down 1-5 — the match was for all purposes over — Serena started playing like, well, Serena. “I was just thinking, honestly at that point, Wow, this is terrible,” says Williams. “I just couldn’t go down like that.”

Wherever Andreescu shot, Serena was there to meet it. She saved a match point. She won eight of nine points. While serving down 5-4, Williams fired a 118 miles-per-hour ace, then double faulted, then hit a 119 miles-per-hour ace, then double faulted, but eventually held to tie up the set. Her play was dizzying, thrilling. She celebrated with a soft fist pump. Ashe celebrated with a little more enthusiasm — the crowd went bonkers — as Serena’s heart-pumping run left everyone convinced that she’d just roll over the Canadian teenager, who seemed on the verge of melting down.

And who would blame her? A year ago, Andreescu couldn’t even get through qualifying at the U.S. Open. This was her debut in the main draw. If the moment overtook her — the fans desperately wanted to see Serena tie Margaret Court’s record for most career Grand Slam singles titles, 24 — she could chalk it up to rookie nerves.

Andreescu, however, wouldn’t have it, proving fortitude beyond her years. She held serve to go back up 6-5, and with Serena serving, she got it back to match point. Serena’s pal Meghan, Dutchess of Sussex, crossed her hands nervously in Serena’s box. Some Serena fans in the Ashe stands couldn’t even bear to watch.

So Serena’s U.S. Open heartbreak continues. Four times in recent years, Williams arrived at Ashe on a seemingly inevitable march towards history. In 2015, she entered the U.S. Open having won the year’s first three Grand Slam titles, attempting to become the first player since Steffi Graf in 1988 to win the calendar year Grand Slam. Italy’s Roberta Vinci, however, shocked her in the semifinals. A year later, Williams could have broken Graf’s record of 22 Open Era Grand Slam titles in front of adoring American fans. She fell in the semis again, this time to Karolina Pliskova of the Czech Republic. (Williams broke Graf’s record in January 2017, when she beat her sister Venus Williams in the Australian Open while pregnant).

After missing the 2017 U.S. Open to give birth to her daughter Olympia, she came back to New York last year to try to tie Court’s overall record of 24 Grand Slams, but lost in the final to Osaka. With this loss to Andreescu, she’s still chasing Court.

Such recent failure doesn’t diminish Serena’s remarkable return to tennis since giving birth to her daughter in September 2017. No athlete has come back from a life-threatening labor, to return to top form in a grueling individual sport like tennis, in her late 30s no less. She’s played in four Grand Slam finals since the start of 2018. No other woman can match that mark.

Read More: Serena Williams Opens Up About Her Complicated Comeback

Still, going winless in these finals is rankling her. She hasn’t even won set in these last four Grand Slam finals appearances. When someone asked her after the match if the losses are having less of an impact on her, Serena gave the questioner a proper side-eye. “I honestly don’t think Serena showed up,” she says. “I have to kind of figure out how to get her to show up in Grand Slam finals.”

Some proper words about Andreescu, the aggressive-yet-composed Canadian teenager who became the first teen since Maria Sharapova in 2006 to win a Grand Slam. When Serena won her first U.S. Open in 1999, Andreescu, the daughter of Romanian immigrants, wasn’t even born (Andreescu becomes the first player born in the 2000s to win a Slam). During last year’s finals, the phenom from the Toronto suburbs was home nursing injuries. “I was sitting on my butt,” she says. On big points, Andreescu let out a few Serena-like “come ons!” to pump herself up. She’s been visualizing playing a Grand Slam final against Serena since winning the prestigious Orange Bowl junior tournament in 2015, and teared up after the match at that memory. “It’s so crazy, man,” she says.

“I’ve really strived to be like her,” Andreescu says. “Who knows? Maybe I can be better.” She smiled and darted her eyes, as if delighting in saying something naughty. Andreescu owns endearing confidence. While her coach, Sylvain Bruneau, posed with trophy given to the winning coach after the match, he apologized for turning it the wrong way. “I’m not used to this,” Bruneau said.

“Well, get used to it,” Andreescu replied.

The Ashe crowd received Andreescu warmly during the awards ceremony after the match. Thankfully, no controversy caused ugly booing in back-to-back years. Andreescu acknowledged that the pro-Serena crowd was her biggest hurdle to victory — the fans laughed — and Serena thanked the crowd for inspiring her comeback. 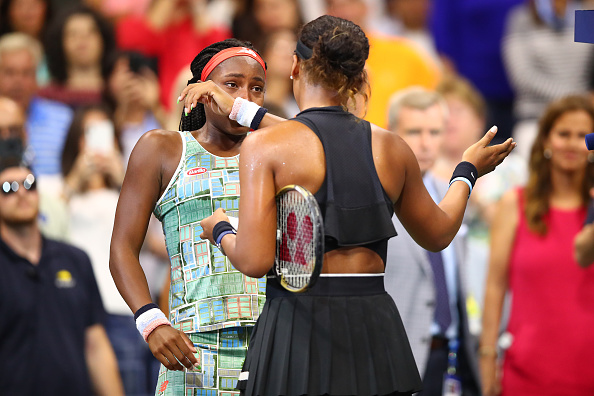 People Are Absolutely Here for Naomi Osaka Consoling Coco Gauff After Beating Her at the U.S. Open
Next Up: Editor's Pick