Meghan Markle Showed Her Support for Serena Williams at the U.S. Open Because Game Recognizes Game

There was plenty to see on the court as Serena Williams competed in the U.S. Open women’s singles final, but people online went wild for something off the court.

It was Meghan, Duchess of Sussex, who showed up in the crowd at Arthur Ashe Stadium to support Williams.

Meghan, Duchess of Sussex arrives to watch Serena Williams against Bianca Andreescu during the Women's Singles Finals match at the 2019 U.S. Open at the USTA Billie Jean King National Tennis Center in New York on Sept. 7, 2019.
TIMOTHY A. CLARY—AFP/Getty Images

Captured by the cameras court-side during Williams’ final match against Canada’s Bianca Andreescu on Saturday in New York City, fans immediately started rooting for the display of friendship between the royal and the tennis monarch.

Reacting to all of the action from the sidelines, Meghan Markle was dressed in a chambray shirt, complimented with a grey jacket and was consistently clapping in view of the fans at home. Markle was seated in Williams’ box, next to William’s mother, Oracene Price.

Williams, who turns 38 this month, has won 23 Grand Slam singles titles in tennis, leaving her one behind Margaret Court’s all-time Grand Slam record. While Williams’ Grand Slam wins include six U.S. Opens, those victories didn’t stop Markle from feeling the intensity of the stakes.

The 19-year-old Andreescu bested Caroline Wozniacki and Taylor Townsend in the tournament in order to advance to the finals against Williams. Williams lost the match to Andreescu in two hard-fought sets 6-3, 7-5.

Meghan Markle, Duchess of Sussex watches on during the ladies' Singles Second round match between Serena Williams of The United States and Kaja Juvan of Slovenia during Day four of The Championships - Wimbledon 2019 at All England Lawn Tennis and Croquet Club on July 04, 2019 in London, England. (Photo by Laurence Griffiths/Getty Images)
Laurence Griffiths&Getty Images

Meghan Markle recently popped up at Wimbledon to help urge Williams on as she has in previous years.

Today’s appearance marks the Duchess of Sussex’s first known solo trip to the states since she gave birth. The last recorded time Markle flew back to be on American soil was in late February for her baby shower in New York City, which Williams co-hosted.

The tennis star and her husband Alexis Ohanian also attended the Duchess of Sussex’s wedding in May of last year.

Williams touched on the evolution of her friendship with the Duchess of Sussex in an interview with Australia’s The Sunday Project last year. “We were actually just texting each other this morning. We have known each other for a long time, but we really kind of are relying on each other quite a lot recently,” she said of the bond.

While Prince Harry and Archie Harrison Mountbatten-Windsor didn’t travel to the game, on Friday, Kensington Palace released details on the trip the royal pair are embarking on in just a matter of weeks to Africa. It will be their first royal tour with their son Archie, who was born in May. 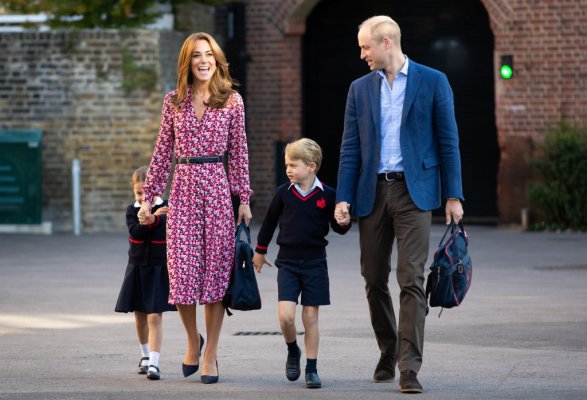 The Royal Family Was All Smiles for Princess Charlotte's First Day of School
Next Up: Editor's Pick