President Donald Trump announced he will reinstate “the highest level of economic sanctions” that were waived as part of the Iran nuclear deal in 2015, fulfilling one of his major campaign pledges and undoing a signature foreign policy achievement of the Obama Administration.

“The Iran deal is defective at its core,” Trump said Tuesday afternoon in an 11-minute long address from the White House Diplomatic Room. “If we do nothing, we know exactly what will happen. In just a short period of time the world’s leading state sponsor of terror will be on the cusp of acquiring the world’s most dangerous weapon. Therefore I am announcing today that the United States will withdraw from the Iran nuclear deal.”

In place of the Iran nuclear deal, Trump said he wants a “real comprehensive and lasting solution,” which would involve eliminating Iran’s ballistic missile program, and stopping its terrorist activities worldwide and “menacing activity” across the Middle East.

Trump has long signaled he would back away from the 2015 agreement that froze Iran’s nuclear program, known formally as the Joint Comprehensive Plan of Action. He has called it “the worst deal ever,” particularly because it isn’t permanent and would allow Iran to resume enriching some uranium after a decade and lift other restrictions after that.

But Trump has faced intense pressure from European allies to stay in the Iran nuclear deal, including from French President Emmanuel Macron, German Chancellor Angela Merkel and British Foreign Minister Boris Johnson in visits to Washington before Trump made his decision.

“Today’s action sends a critical message,” Trump said. “The United States no longer makes empty threats. When I make promises, I keep them.”

Iranian President Hassan Rouhani quickly responded to Trump’s announcement, warning he may resume uranium enrichment — a key process to building a nuclear weapon — soon. “I have ordered Iran’s atomic organization that whenever it is needed, we will start enriching uranium more than before,” Rouhani said in a televised announcement.

Leaders from around the world quickly condemned Trump’s decision to pull the U.S. out of the Iran nuclear deal. In a joint statement, Macron, British Prime Minister Theresa May and German Chancellor Angela Merkel of asked Iran to “show restraint” and “continue to meet its own obligations under the deal.” On Twitter, Macron said they “regret” Trump’s decision.

Former President Barack Obama, whose administration helped broker the Iran deal, called Trump’s decision “a serious mistake.” Former Secretary of State John Kerry, who was one of the architects of the Iran nuclear deal under President Obama, has been speaking out about the deal and reportedly met with foreign leaders in recent weeks to discuss how to protect it.

Trump slammed Kerry the day before he announced his decision to pull out, tweeting that the nuclear deal was “very badly negotiated” and that Kerry “was the one that created this MESS in the first place!”

Trump also made other foreign policy news during his Tuesday appearance, revealing that Secretary of State Mike Pompeo was on his way to North Korea at that moment and that the location and date have been chosen for Trump’s upcoming meeting with North Korean leader Kim Jong Un. 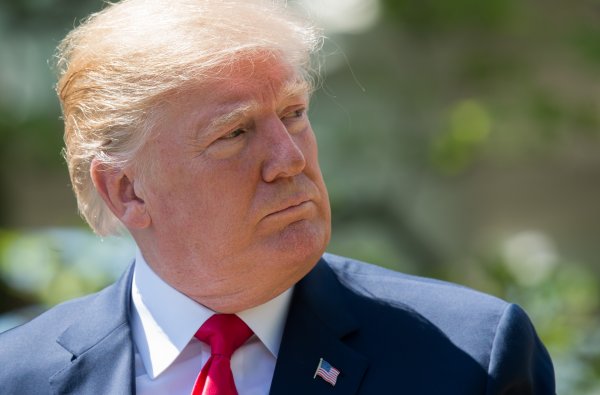 Trump Could Make History by Pleading the Fifth
Next Up: Editor's Pick