'An Unprecedented Scandal': How Newspapers Around the World Reacted to Trump's Behavior at the G-7 Summit

As President Donald Trump departed early from the G-7 summit in Quebec on Saturday, America’s closest allies were left reeling. Trump abruptly refused to sign the joint statement the seven leaders had agreed on a range of topics including trade and the environment, announcing his decision in a pair of tweets from Air Force One. Even before this, the other countries—Canada, France, Germany, Italy, Japan, and the U.K.—had struggled to find common ground with the American president, who had called for Russia to rejoin the bloc, from which it was suspended in 2014 following the annexation of Crimea, and labeled Canadian Prime Minister Justin Trudeau “weak and dishonest.” Here’s how media in the G-7 countries reacted to the president’s performance.

The editorial board of the Toronto Star, Canada’s highest-circulation newspaper, said,”He sulked his way through the first part of the meeting, gave his delegation the OK to sign the summit’s pallid final communique, then threw a hissy fit and tore it up as soon as he was back on Air Force One. […] It was both dishonest and amateurish.”

The Globe and Mail’s editorial board wrote, “Relations between two of the world’s closest allies are now at a perilous low. The fault rests entirely with Mr. Trump and his advisers. Our government has been patient with the President and his protectionist agenda. So too have Canadians, but this is getting tiresome. We are a polite people, but the President will learn that, when roused, we don’t roll over at the request of an insulting bully, no matter how big.”

A columnist for Der Spiegel, a German weekly news magazine, said the events of the summit amounted to “an unprecedented scandal: Never has there been such a step in 40 years of the G-7’s history, and never has a participant so duped his partners before.”

Another Der Spiegel commentator wrote: “The G-7 debacle shows the real problem with Donald Trump’s politics is Donald Trump. His behavior follows no order, no logic, instead just the desire to be the best, most important and biggest. The collapse of the West, the destruction of decades of friendship is simply a product of his unprecedented ego trips.”

The editorial board of Le Monde, one of France’s biggest daily, said: “One thing is clear: the president of the United States, Donald Trump, is better disposed to the North Korean dictator Kim Jong-un, a man whose dynasty has locked his country and his people into a megalomaniac madness, than to his European, Japanese and Canadian allies […] This kind of behavior has no precedent in the practice of diplomacy between allies. The Europeans must learn lessons from it now.”

Left-leaning Libération‘s New York correspondent said, “Donald Trump was ready with a smile for the G-7’s traditional family photo, but for his supporters, this calm image matters less than the offensive attitude of an American president against the world, defending ‘America First’.” The writer also warned that Trump’s taste for confrontation seemed to be contagious, noting a hardening in French President Emmanuel Macron’s tone towards the U.S.

The editorial board of the Japan Times, the country’s largest and oldest English-language daily newspaper, wrote, “If U.S. President Donald Trump’s objective is to make himself the center of attention at every international event, he is succeeding. If he aims to undermine the legitimacy of international institutions, he is making progress. If, however, he seeks to make America great again, his actions are working at cross purposes to his goal. Those are the inescapable conclusions to be drawn from last weekend’s Group of Seven leaders summit.”

The Asahi Shimbum‘s editorial board warned Prime Minister Shinzo Abe to take stock of the new world order, writing “Japan could end up lagging behind the radical changes occurring in the landscape of international relations if Abe continues to maintain a foreign policy agenda fully dependent on the Trump White House. […] Abe should confront and act on the obvious fact that Japan cannot protect its own interests by simply following the United States.”

In Italy, whose new Prime Minister Giuseppe Conte backed Trump’s calls for Russia to rejoin the bloc, a writer for the right-wing daily Il Giornale said, “The new course that Italy is on has found an interested admirer in Washington. If for a few years we had to put up with the Renzi-like Obama [referring to Italy’s former technocrat PM], Giuseppe Conte now has someone who will welcome him with a pat on the back to the Oval Office.” The column said “finding the support of our “main ally” as he called him in the his speech to the chamber” was Conte’s first big aim as Prime Minister. “And if courtship was what he wanted, it’s what he got, both in his positions on Russia and on tariffs.”

A writer for the daily newspaper La Stampa, “If anyone still had any doubts, it is now clear that the goal of the American president is to change the world order. That’s what he was elected to do. The question what he wants to replace it with, and if the new model can really offer everyone more opportunities than the current one he intends to demolish.”

Britain’s left-leaning daily, The Guardian said in an editorial that the events of the summit marked “a watershed for the 21st-century democracies. It is the moment when Donald Trump’s disruption of the international order moved from annoying threat to damaging reality.”

“The US is the cornerstone of the post-1945 international order. If Mr Trump wishes to remove that cornerstone everything else is threatened. That has not yet happened. The thankless task of doing what can be done to mitigate Trumpian disruption must continue. But a fissure is growing. And it got wider in Quebec.”

The right-leaning Daily Telegraph’s editorial board said, “There is something to be said for his refusal to subscribe to the conventional diplomatic niceties. Invariably, final communiques are couched in bland terms to cover up differences that always exist between participants. Mr Trump decided to make those apparent rather than pretend otherwise.”

“On the other hand, one point of these meetings is to present a united approach on behalf of the economically developed democratic nations whose shared outlook and values frame the very concept of what has come to be known as “the West.” Mr Trump’s somewhat petulant and disruptive behaviour in Quebec calls into question whether such a political construct can be said to exist any longer under the current U.S. president.” 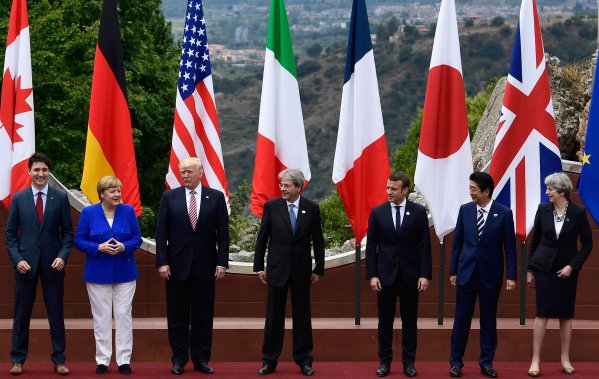 U.S. Allies Are Ready to Turn Their Backs on Trump at the G-7 Summit
Next Up: Editor's Pick