A handout photograph from the German government shows a group of leaders at the Group of Seven summit, including German Chancellor Angela Merkel and President Trump, in Canada on June 9, 2018.
Jesco Denzel—EPA-EFE/Shutterstock
By Andrew Katz

This is not the first time an image of German Chancellor Angela Merkel literally talking down to an American president has made the rounds online.

Recall back in 2015, almost three years ago to the day, when Merkel, with outstretched arms, stood before President Obama, seated on a bench at that year’s Group of 7 summit.

The picture went viral, but appeared to draw more chatter about looking like a scene from “The Sound of Music” than about actual relations between the two friends.

Fast forward to June 9, the second day of this year’s G-7 summit in Canada, when a photographer captured a striking image of President Trump surrounded by a host of world leaders.

Let’s start with Merkel. With both hands down on the table in front of her, she’s leaning in during what appears to be a tense discussion, staring straight at her American counterpart and cast in a light that presents her as the central figure, the power. Jesco Denzel, an official German government photographer at the summit, did his job here: the image was released by the Germans with a caption that referred to the scene as a “spontaneous meeting between two working sessions.”

Also pictured are Japanese Prime Minister Shinzo Abe, with arms crossed and an uncertain look on his face; John Bolton, the U.S. National Security Adviser, staring blankly; British Prime Minister Theresa May, who is identifiable here only by her hair; and French President Emmanuel Macron, with one hand on the table. (A day earlier, a different image involving Trump and Macron picked up steam: one that showed Trump’s hand, squeezed so hard by Macron that one of his finger’s left an imprint.)

The imprint of French President Emmanuel Macron's thumb can be seen across the back of President Trump's hand after a handshake during a bilateral meeting at the G7 Summit in Canada on June 8, 2018.
Leah Millis—Reuters

And then there is Trump, who has locked eyes with the trio of American allies who, on the second day of this summit, are not pleased with his presence and performance, past and present.

He arrived to the gathering with the suggestion that Russia should, again, have a seat at the table, following its ouster in 2014 over Vladimir Putin’s annexation of Crimea. Trump, who before and after his election in 2016 faced a wave of allegations of inappropriate sexual behavior, scored no points for a late arrival to a gender equality breakfast. Canadian Prime Minister Justin Trudeau, with whom he was already publicly spatting, had already delivered his opening remarks when Trump made it to his seat, next to a visibly concerned Christine Lagarde.

President Trump arrives as Managing Director of the International Monetary Fund, Christine Lagarde, looks up while they attend a G7 and Gender Equality Advisory Council meeting as part of the summit in Canada on June 9, 2018.
Yves Herman—Reuters

Trump talked tough on trade upon arrival and left the same way. During a news conference later, he likened the U.S. to “the piggy bank that everybody’s robbing.” He pressed other leaders to eliminate tariffs and dramatically threatened to “stop trading with them” if practices he sees as unfair were not changed to his liking.

He left the summit for Singapore, where he is scheduled to meet with North Korean Leader Kim Jong Un on June 12. In the afternoon, Trudeau announced that the leaders had signed a joint statement, and later said he would impose retaliatory measures in July following Trump’s steel and aluminum tariffs. In two tweets sent from his flight, Trump railed against what he said were “Justin’s false statements,” said he refused to endorse the joint communiqué and called Trudeau “weak.”

It’s easy to cast the president as weak and defensive in this photograph. His arms are crossed and he’s seated when everyone else is standing. He looks like he’s getting grilled, taken to task for not acting like his predecessor.

Merkel’s office wasn’t the only government to release an image from the meeting. Italy’s populist Prime Minister, Giuseppe Conte, tweeted a version that shows him holding papers with Macron and Merkel. Trump is barely visible, if not for his hair.

Macron shared a version that focuses on himself, gesticulating as he talks to Trump.

And, noting the laughter, here’s what the U.S. distributed:

But for a man who is all about image control, this is his power play. Bolton himself tweeted the Germans’ image with Trump’s “bank” line: “The President made it clear today. No more.”

Trump will see this picture as one that shows him firm and unwilling to budge when it comes to certain issues, even with allies. It’s how he wants to be seen: America against the world, a Trump against the world. 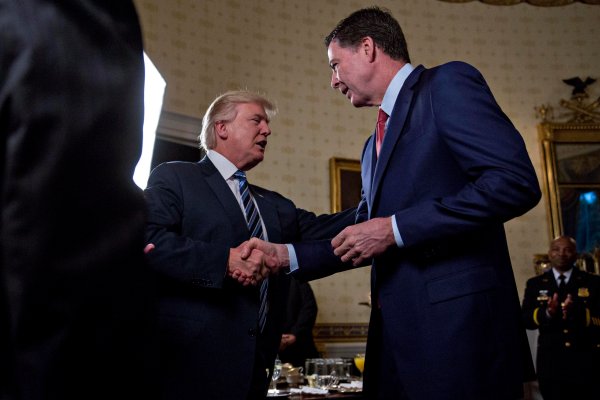 Read the 270 Arguments President Trump Has Made Against the Mueller Investigation
Next Up: Editor's Pick