The U.S. Centers for Disease Control and Prevention (CDC) and the Food and Drug Administration (FDA) are investigating a growing number of “severe” lung disease cases that appear to be related to vaping.

The CDC first announced earlier this month that it would help state health departments investigate a concerning number of serious lung illnesses apparently linked to use of e-cigarettes, which heat substances including nicotine and cannabis to create aerosols that users inhale. At that time, 94 cases in 14 states had been reported—but as of an update Friday, according to a CDC statement, the number had ballooned to 215 possible cases in 25 states. One adult patient in Illinois died from his illness.

There is no known cause of the illnesses, and the CDC notes that it’s not clear whether all of the cases were caused by the same thing. Still, vaping appears to be a common thread across states involved in the investigation. Many patients said symptoms began with difficulty breathing, shortness of breath and chest pain, and some progressed to include vomiting, diarrhea and fatigue. An infectious disease does not appear to blame, the CDC says.

The CDC hasn’t zeroed in on any specific vaping product or substance that may be at fault, but many people reported using products that contain THC (a compound in marijuana) or cannabinoids (like the synthetic drug K2), according to the latest statement. The FDA is testing about 80 product samples to determine whether they contain nicotine, THC, cannabinoids or other chemicals. No one should vape products purchased on the street, or modify e-cigarette products to add substances not included by manufacturers, the CDC warns.

Though vaping nicotine does not seem to be at the center of the agencies’ investigations, research suggests it isn’t harmless, either.

Vaping nicotine is thought to be a healthier long-term alternative to smoking cigarettes, since it delivers fewer cancer-causing chemicals than traditional combustible products. But as e-cigarette use has grown more popular among both adults, for whom it is intended, and teenagers, for whom it is illegal, a number of apparent side effects have been reported. Preliminary studies have shown links between e-cigarette use and vascular, respiratory and cellular damage, and federal health agencies are looking into rare health issues potentially associated with vaping, such as seizures, injuries resulting from exploding devices—and, now, pulmonary diseases. Some teenagers have also become addicted to nicotine by vaping, raising concerns among public-health officials.

It’s not entirely clear how or if e-cigarettes are causing many of these health problems. But nicotine poisoning can occur when people, especially children, ingest liquid nicotine or absorb it through the skin, according to the American Academy of Pediatrics. Vaping products are also not approved by the Food and Drug Administration (FDA), so safety and manufacturing practices may be lacking at some companies. In 2018, for example, the FDA warned that products from a Chinese e-cigarette company contained unapproved drugs intended for erectile dysfunction, which could be dangerous for certain users.

Gregory Conley, president of the industry group the American Vaping Association, said in a statement that, “We are confident that the final results will show that amateur-made street vapes containing THC or other drugs were responsible for these illnesses, not nicotine vaping products.”

Kevin Burns, CEO of market-dominating e-cigarette company Juul, made similar comments in an interview with CBS. “Most of [the reports] that have any specifics have said they’re related to THC,” Burns said. “We don’t have the details on all those reports. If there was any indication that there was an adverse health condition related to our product, I think we’d take very swift action associated with it.”

People who experience illnesses after vaping are encouraged to report the incident to the FDA, here. 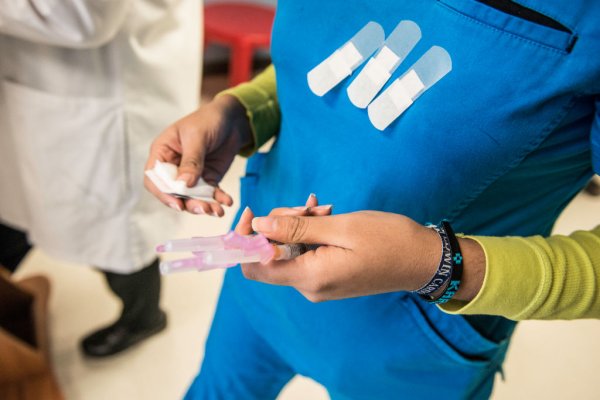 Confused About Who Should Get the HPV Vaccine, and When? The CDC Has New Recommendations
Next Up: Editor's Pick