Teens Are Vaping in Record Numbers. But Fewer Than Ever Are Drinking and Smoking

Teen vaping is reaching new heights of popularity, while underage drinking is plummeting to historic lows, according to new data from the 2018 Monitoring the Future survey, an annual poll of around 45,000 eighth, 10th and 12th graders overseen by the National Institute on Drug Abuse (NIDA). That may be, in part, because teens aren’t socializing as much as they used to.

NIDA Director Dr. Nora Volkow says those record-setting peaks and valleys aren’t necessarily related. “It’s not that kids, instead of drinking, may be vaping,” she says — but both of those records may point to the new ways that teenagers today are using substances.

In this year’s survey, approximately 37% of high school seniors said they had used an e-cigarette during the prior year, compared to about 28% in 2017. Rates also climbed among eighth and 10th graders, the survey found.

E-cigarettes, Volkow says, are popular in part because they’re new and exciting to teenagers, and they come in a range of appealing flavor options. “Novel things actually acquire a saliency that something you’ve gotten used to does not have,” she says.

But Volkow says the sleek designs of many top e-cigarette brands are also uniquely appealing to a generation that grew up surrounded by devices. “The new generation, their brain has developed to embrace these technologies,” Volkow says.

Teen drinking has been declining for years, and it continued to do so in 2018. In the new data, just 17.5% of high school seniors said they’d been drunk in the last month, compared to 26% five years ago. Binge drinking is also down, with only about 14% of 12th graders saying they had consumed five or more drinks in a row in the past two weeks, versus a peak 31.5% in 1998.

Volkow says improvements in alcohol education, prevention and policy are largely to thank for steadily declining teen drinking rates. But she says that young people’s reliance on technology may also partially explain record-low rates of underage drinking, along with the increasing popularity of social media.

“There is a massive change in culture that may be contributing to decreases in alcohol drinking, particularly heavy alcohol drinking,” Volkow says. “Many more teenagers interact through social media as opposed to interacting physically with one another. Taking drugs is a social behavior, so you’re much more likely to take drugs in a group. By decreasing the opportunity that teenagers have of being face to face with one another, you may be decreasing the total exposure to these drugs,” including alcohol. Perhaps for some of the same reasons, other research has shown that teen sex is also on a downward trend.

Rates of other types of substance use are also down among young people, NIDA’s data shows. Tobacco use is also as low as it’s ever been, with just 3.6% of high school seniors reporting smoking daily. Twenty years ago, that number was around 22%.

Opioid use was also scarce among teenagers this year, despite the nationwide opioid epidemic. About 3.4% of high school seniors said they had taken non-heroin opioids, such as prescription painkillers, during the past year, and less than 1% said they had used heroin.

Aside from vaping, marijuana use was one of the only substance categories that did not decline in this year’s survey. Almost 6% of high school seniors reported daily use, a rate fairly consistent with those seen over the past two decades, and almost 36% of seniors said they had used marijuana during the preceding year.

Still, the survey results are largely encouraging for public health, with the exception of the rapidly rising vaping rates. The health effects of e-cigarettes aren’t well understood, and other research has connected youth vaping to higher rates of cigarette and other tobacco use. But even there, Volkow says, there’s reason for optimism, given recent Food and Drug Administration regulations that severely restricted the sale of flavored e-cigarettes.

“With, on the one hand, policies and regulations, and, on the other hand, education of teenagers, you may be able to minimize negative effects from the widespread use of the devices,” Volkow says. “I predict that [the regulations are] going to have a positive effect.” 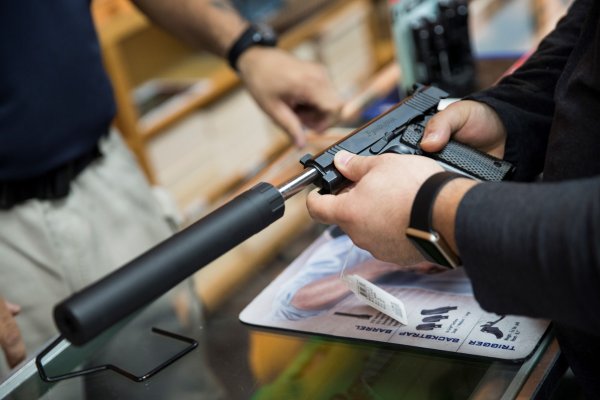 Gun Deaths in the U.S. Are at Their Highest Rates in Decades, CDC Says
Next Up: Editor's Pick