Are E-Cigarettes Safe? Here's What the Science Says

In 1965, when Herbert Gilbert was granted the first patent on a smoke- and tobacco-­free cigarette, he wrote that the product would “provide a safe and harmless means for and method of smoking.”

More than 60 years later, however, modern iterations of Gilbert’s invention have sparked debate in the public-health community. E-cigarettes, which have grown increasingly popular in the past five years, were designed as a tool to help people quit ­smoking—and by doing so they should drastically reduce rates of lung cancer and other diseases. But the question is, does that potential outweigh their possible risks to human health?

Traditional cigarettes work by simple combustion: when tobacco is lit, it combines with oxygen and creates an inhalable smoke. E-cigarettes, sold by brands including Juul, Blu and Vuse, heat a chemical-­packed liquid that typically contains nicotine and often a flavoring agent, creating an aerosol. By delivering ­nicotine without tar and other nasty by-­products of combustion, e-cigarettes purportedly give smokers a healthier alternative to cigarettes while still satisfying cravings.

It seems like a win-win. But in practice, there is no consensus yet about whether or not e-cigarettes effectively help smokers ditch cigarettes. Vapes, as they’re called, contain fewer of the cancer-­causing chemicals found in traditional cigarettes (like arsenic, benzene and formaldehyde), but there is little long-term data about their effects on health—and preliminary science suggests that they may harm the lungs and heart. Plus, while e-cigs are made for and legally available only to adults, they’re popular among ­teenagers—­potentially priming a new generation for nicotine addiction and tobacco use, experts worry.

While public-health officials in some places, like the U.K., are strongly in favor of e-cigarettes, the World Health Organization is more wary. In the U.S., Dr. Scott ­Gottlieb—­commissioner of the Food and Drug Administration (FDA), which regulates the ­devices—says he believes e-cigarettes are good for public health, despite the unknowns. E-cigs are “not risk-free,” Gottlieb says, but the possibilities they hold for adult smokers trying to quit, like reduced rates of lung cancer and better overall respiratory health, are important.

“If we were able to switch every adult smoker completely onto an e-cigarette product, we would have a significant impact on overall public health,” Gottlieb says. Tony Abboud, executive director of the e-cig trade group Vapor Technology Association, agrees, calling e-cigarettes “among the most promising public-­health innovations of the 21st century.”

But some researchers studying their effects aren’t convinced. They believe there’s not enough evidence showing that e-cigarettes help adults quit smoking to outweigh a growing number of studies that suggest they come with health harms, including a higher risk of heart disease and increased rates of respiratory conditions. “What are the effects of [e-cigarettes] when a user takes 200 puffs a day for 20 years?” asks Thomas Eissenberg, director of the Center for the Study of Tobacco Products at Virginia Commonwealth University. “Anyone who says they know the answer to that question needs to present some data.”

The long-term effects of e-cigarette use aren’t the only unknowns. It’s also unclear whether vapes actually help smokers quit in the first place.

Some studies (supported by plenty of anecdotal evidence from users) have found that e-cigarettes can make smoking cessation easier. But others have found the opposite: that they make smokers more likely to continue using cigarettes, potentially because they sustain a nicotine habit. E-cigarettes are not FDA approved as smoking-­cessation devices, and vaping companies cannot make health claims about their products without this approval; manufacturers usually call them cigarette alternatives for adult smokers.

Juul is the most popular e-cigarette. According to recent data from the Centers for Disease Control and Prevention (CDC), Juul sold 16.2 million of its sleek, flash-drive-­resembling devices in 2017, 641% more than the year before. The company says it’s conducting studies on smoking cessation, toxicology and more. “We want to understand everything and we want to share all that data, because that’s ultimately what’s going to move the needle for the public-health conversation,” says Ashley Gould, Juul’s chief administrative officer. Gould also emphasizes that Juul was founded “to provide a satisfying alternative to cigarettes, with the objective of completely eliminating cigarettes.”

But many smokers who turn to e-cigarettes are not making the switch completely. Research from the CDC found that in 2015, about 59% of adults who used e-cigarettes also smoked. (­Adolescents who vape are also more likely than their peers to smoke cigarettes as well, according to a recent RAND Corporation study.) While some experts believe that replacing any amount of cigarette smoking with vaping is a good thing, some research suggests that dual use may be riskier than either smoking or vaping alone. An August study published in the American Journal of Preventive Medicine found that both daily smoking and vaping are associated with a higher risk of heart attack, and that doing the two concurrently compounds those risks.

E-cigarettes may also have a large impact on lung cancer. Compared with cigarettes, they contain far fewer of the ingredients known to cause cancer, and the ones they do contain are present at lower levels. There is also no evidence proving that e-cigarettes cause cancer. Given that cigarette smoking is the number-one risk factor for lung cancer, the assumption is that if smokers switched from cigarettes to vapes, lung-­cancer rates would potentially plummet.

But scientists still don’t know how long-term use of e-cigarettes affects health—in part because the devices just haven’t been around long enough for the necessary rigorous research to have been done.

Plus, comparisons with cigarettes go only so far, since e-cigarettes are a radically different product, says Silvia Balbo, assistant professor of environmental health sciences at the University of Minnesota School of Public Health. “When you’re looking at chemicals that are present both in tobacco regular cigarettes and e-cigarettes, you can do a comparison,” she says. “But if you consider the mixture on its own and how all the different compounds and chemicals are interacting, then that poses a different question.”

Though studies in this area are preliminary, some research suggests that e-cigs may carry health risks. In a small study this year, Balbo and her colleagues found that 15 minutes of vaping produces compounds that can damage DNA in the mouths of e-cigarette users. The study involved only five people and did not track their health over time. But Balbo says the kind of DNA changes they observed could be related to multiple types of cancer, including oral and lung.

There are other potential lung concerns. Diacetyl, a chemical commonly found in flavored e-liquids, has been linked to respiratory disease. And research presented in May at the American Thoracic Society’s international conference finds that e-cigarette use may be associated with the development of respiratory conditions like COPD and bronchitis.

Those results are reason for ­caution—but letting unknown health risks stamp out e-cigarettes would be “throwing the baby out with the bathwater,” says ­Dr. Michael Siegel, professor of community health at the Boston University School of Public Health. Siegel has devoted his career to curtailing tobacco use—and that’s why he says he believes that e-cigarettes are a good thing. “We know the harms of smoking: when people smoke, it’s going to kill them,” Siegel says. “We shouldn’t let the fact that there are some unknown risks blind us to the fact that we know that smoking is killing people.”

In an ideal world, of course, a smoker who wants to quit would ditch nicotine entirely. But that’s difficult to do, and ­Siegel says e-cigarettes can offer a ­valuable bridge to smokers who can’t or won’t quit by other means. “Anything they can do to move toward smoking cessation is a great thing,” he says.

The FDA’s biggest concern is how to stop teens from vaping. Teen use of e-cigs is sharply rising, according to federal data; they are now more popular than cigarettes among high school students. In September, the FDA intensified its efforts to regulate e-cig sales, galvanized by what Gott­lieb called an “epidemic” of youth use that is “simply not tolerable from a public-health standpoint.” The agency ordered e-cig companies to figure out how to keep their products away from underage users—and threatened to ban the sale of some flavored e-cigarettes if they didn’t. (Flavored products—­everything from cotton candy to mint—accounted for about 60% of e-cigarette sales in 2016, CDC data shows.)

Doing so might be the only way the FDA can meet its mandate of proving that e-cigarettes are good for public health overall, Gottlieb says. “In order to close the on-ramp for kids, unfortunately, we’re now going to have to take a step that’s going to narrow the off-ramp for adults,” Gottlieb says. “If we don’t bring down the teenage use of these products, it’s going to be hard to fairly argue, through a scientific process, that this is providing a net public health benefit.”

Siegel agrees that curtailing teen use should be a priority, and says it could be achieved by regulating e-cigs’ marketing and sales, as well as how much addictive nicotine they contain. But he says sweeping actions like removing many products from the market would also harm adult users, many of whom like to use flavored products. Without palatable e-liquids, he says, recovering smokers might be lured back to cigarettes.

“If anything, we’re helping the tobacco industry, because we’re protecting cigarettes from competition and we’re putting all the attention on this other product,” Siegel says. “We’re doing what the cigarette industry wants us to do.”

Time will tell how the government tackles the e-cigarette conundrum. But as studies continue and youth use increases, one thing is certain: the debate around e-cigarettes is just beginning to heat up. 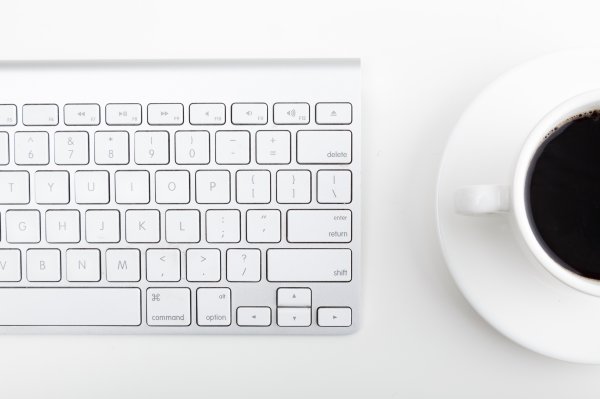 The 5 Most Germ-Filled Places In Your Office—And How to Protect Yourself
Next Up: Editor's Pick