The FDA Is Investigating a Possible Link Between Vaping and Seizures

E-cigarettes are often thought of as a less dangerous alternative to cigarettes, since they contain fewer lung-cancer-causing chemicals. But preliminary research has also shown health risks associated with nicotine-rich e-cigarettes, including a higher probability of heart and lung problems.

Now, the Food and Drug Administration (FDA) is alerting Americans to a new potential health risk. Using e-cigarettes, also known as vaping, may be associated with seizures, especially among young people, the FDA announced Wednesday.

The agency said it has received 35 reports of seizures following e-cigarette use since 2010. While the FDA acknowledged in the statement that 35 cases is a small number — especially considering that millions of Americans of all ages vape — it nonetheless said the data is worth further investigation.

“We can’t yet say for certain that e-cigarettes are causing these seizures,” outgoing FDA Commissioner Dr. Scott Gottlieb and Principal Deputy Commissioner Dr. Amy Abernethy said in the statement. “We’re sharing this early information with the public because as a public health agency, it’s our job to communicate about potential safety concerns associated with the products we regulate that are under scientific investigation by the agency.”

It’s not clear how e-cigarettes could be causing seizures, but it’s possible that nicotine poisoning is a factor, the statement says. Liquid nicotine, like that used in e-cigarettes, can be toxic when swallowed or absorbed through the skin, according to the National Capital Poison Center and the American Academy of Pediatrics, potentially resulting in seizures or death.

It’s possible, though not proven, that vaping liquid nicotine may also lead to seizures under some circumstances, the FDA says. The agency also pointed out that some of the seizures occurred in people with a history of seizure disorders, or who were also using other substances.

More research is needed, and the FDA is asking anyone who experiences unexpected side effects or health issues after vaping to report it to the agency.

While Gottlieb has maintained during his time at the FDA that e-cigarettes may give adult smokers a valuable way to quit, he has made curbing youth access to them a priority. Most recently, he rolled out a proposed plan for limiting sales of flavored e-cigs to teenagers, and announced new efforts to find treatments for kids who are hooked on vaping. 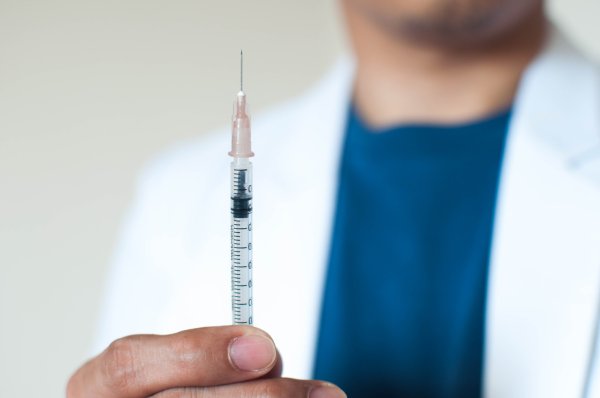 Flu Season Isn't Over Yet — and More Serious Strains Are On the Rise, CDC Says
Next Up: Editor's Pick