'I’ll Do Anything in My Power to Prevent This.' How a Small Nevada Town Is Bracing Itself for 'Alienstock,' the Area 51 Music Festival

When 21-year-old Matty Roberts started the Facebook event “Storm Area 51, They Can’t Stop All of Us,” he said he only meant it in good fun. But soon after the June 27 post, millions of people said they’d attend—and the U.S. military put out a statement discouraging it.

Now, Roberts, who lives in Bakersfield, California, came up with an alternative and is instead going to host a music festival in the area. Roughly 27 miles north of Area 51, Rachel, Nev. is the closest town to the Air Force facility that’s infamous amongst conspiracy theorists who swear the base has proof of alien life for decades. It is now set to house Alienstock from Sept. 19 to Sept. 22.

While millions of people have enjoyed the viral joke, a potential music festival has sparked concern among residents in Rachel, a high desert town with a population of less than 100 people and almost no cell-phone service, according to the town’s website. With little infrastructure — the town has only one business, the Little A’Le’Inn hotel, the closest grocery store and gas stations are more than 50 miles away and the nearest hospital is two and a half hours away in Las Vegas — residents are concerned the town can’t support a festival.

“The locals are not on board, nobody asked us, and we don’t appreciate anyone threatening to take over our town,” Joerg Arnu, who first bought property in Rachel in 2003 and runs the town’s website, tells TIME. “I’ll do anything in my power to prevent this.”

Bob Clabaugh, a retired pilot who has lived in Rachel for more than two decades, fears there won’t be enough sanitation facilities for the big festival in his small rural community; people could damage public and private land; if violence breaks out, it would be hard to control the crowds. “We have no fire department out here. If a fire started, there’s no way of putting it out,” he says. “There’s just a lot of reasons not to have this many people here without a serious planned system set up for it.”

Arnu, Clabaugh and others met with the Lincoln County board of commissioners on Aug. 19 to discuss ways to prevent Alienstock. Ideas under consideration included shutting down State Route 375 (also dubbed the Extraterrestrial Highway) that weekend to bar anyone from driving into town and requiring a bond (of up to $5,000,000) to hold concertgoers responsible for any mess left behind.

Ultimately, the board issued the special permit for Alienstock, with one caveat: a pre-declaration of emergency for the town, in case things go awry during the festival, at the suggestion of the county sheriff’s department and emergency management office, Bevan Lister, the board of commissioners representative for the seat in nearby Pioche told TIME on Tuesday. “We felt it prudent,” Lister said.

Screenshot from Google Maps of Rachel, Nevada. The Little A'Le'Inn is the only business in town.
Google Maps

“I’m not opposed to [Alienstock] if it’s done correctly,” says Clabaugh. “But at this point, it’s not being handled correctly and it’s certainly not tenable.”

While it remains to be seen how many people will attend, as you don’t need tickets to attend, organizers say they expect 5,000 to 25,000 attendees, based on Facebook event interest, the number of people subscribed to Alienstock’s email list and donations to the festival’s expenses through Alienstock’s website.

As the planning stage is underway, Roberts is aware that safety could be an issue and says his team is working on hiring security to keep the attendees under control and to try to keep the peace. He says he’s also trying to provide free drinking water to all attendees to help with the September desert heat. He’s also in the process of lining up food vendors.

“We’re not really about it for the money,” says 20-year-old Brock Daily, one of the organizers. “We’re standing in front of a huge potential movement here.” The team is putting together a lineup of mostly EDM performers, which will be announced in the coming weeks, says Daily, who has experience organizing festivals in his home state of Arkansas as the head of marketing for Arkansas EDM Family. Roberts, the creator of the original Facebook event, says the event welcomes artists of all genres.

Despite safety and security concerns, Roberts is really looking forward to the festival, which he compares to the likes of Burning Man. “It’s exciting and it’s cool for everyone involved,” he tells TIME. To quell the possible influx of people in Rachel, Roberts says George Harris, who runs the Alien Research Center tourist site in Hiko, Nevada, roughly 40 miles away, will host a back-up event.

Although Connie West, who owns the Little A’Le’Inn with her mother, Pat Travis, is helping to plan Alienstock, her feelings are complicated. “I can’t wait until it’s over,” she says. West and her mother own a total of 35 acres of land surrounding the hotel, and they have rented out approximately 300 parking spots on land for camping, in addition to around 30 RV spots and the 10 rooms at the inn.

West says she is enlisting the help of her family and friends with military backgrounds to provide security, among other volunteers.

The irony that this debate coincides with the 50th anniversary of Woodstock is not lost on Claubaugh, who says he sees many “parallels.” At Woodstock, from Aug. 15 to 18 in 1969, 400,000 people arrived when only around 50,000 had been expected. Max Yasgur, the farm owner who rented out his land for the music festival in Bethel, New York, was sued by his neighbors and Yasgur himself later won a settlement of $50,000 from organizers for the chaotic event’s lack of proper bathrooms, which left the land in disarray after the festival.

Some residents fear the same could happen in Rachel. “[Rachel] is going to get destroyed,” Arnu says.

West shares these concerns, which is why she’s working to ensure the event goes smoothly. “I’m just as terrified as they are. I live here too, and I’m just doing my best,” she says.

Lister, the Pioche board of commissioners representative, is at least relieved that it’s an organized event, rather than the original satirical “raid.” “If attendees conduct themselves with some dignity and respect for the area and its people, there will likely be a good time enjoyed and little issue,” he told TIME in an email.

As the organizers prepare to hold Alienstock in Rachel, one more hurdle may remain. Much of the area surrounding the Little A’Le’Inn is federal public land. If the large-scale event expanded beyond private property, Alienstock’s organizers would need a permit, according to Christopher Bush, the chief of communications for the Bureau of Land Management’s Nevada sector. The agency has not yet received any requests to hold an event on public land in Rachel, Bush says.

But even without permits for Alienstock, Daily says attendees could still arrive in Rachel on Sept. 19 — and it’s up to them to control it. “We created a monster and now we need to organize it. People are gonna be going out there no matter what,” he says. 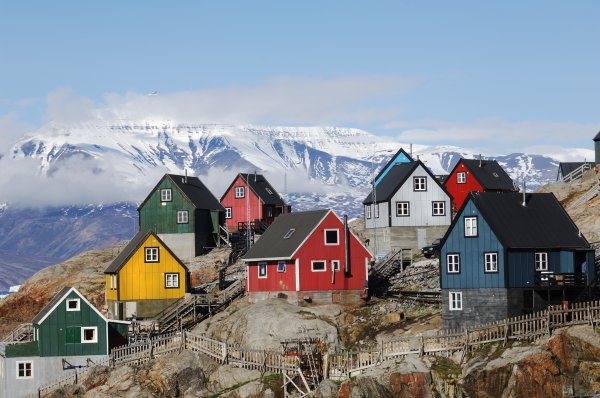 People Have Jokes About President Trump’s Reported Wish to Buy Greenland
Next Up: Editor's Pick