Why Are Area 51 Conspiracy Theories So Popular? Here's What Psychologists Say

Here’s hoping there are aliens at Area 51. For one thing: they probably have cool spaceships. For another, the extraterrestrials are said to have arrived in 1947, so if they were going to eat us, they likely would have done so by now. Finally, answer this question: What’s more interesting, a world with aliens or a world without them?

Area 51 has been much in the news lately, ever since the June 27 launch of the Facebook page named “Storm Area 51, They Can’t Stop All of Us.” The crowdsourced semi-satirical raid on the secretive Air Force base is scheduled for Sept. 20 at 3:00 a.m. So far, 1.9 million people have said they’re going, and another 1.4 million have clicked that they’re interested, attracted by the page’s decidedly straightforward appeal: “Let’s see them aliens.”

Whether or not there are aliens to see, of course, is at the heart of a globally famous 72-year-old conspiracy theory. Believers argue that the crash of what the government insists was a weather balloon near Roswell, New Mexico was actually the advance guard of an alien presence whose arrival has been covered up behind the gates of a nearby Air Force base ever since. The Roswell rumors, of course, were their own form of an advance guard of conspiracy nonsense over the past few generations that includes the 9/11 truthers, the Obama-era birthers, the second gunman in the Kennedy assassination, and much more rubbish.

But the Area 51 tales seem to have a special stickiness, appealing even to some skeptics and rationalists who insist that the simplest answer to any mystery is likely the correct one — and it’s a whole lot less simple to keep so explosive a secret for seven decades than it would be for that secret to slip. So what is it that gives the Area 51 tales their enduring appeal?

In some ways, Area 51 rumors have a lot in common with every other conspiracy theory throughout history. According to a 2017 paper in Current Issues in Psychological Science by psychologist Karen Douglas of England’s University of Kent and her colleagues, nearly all conspiracy theories satisfy three basic needs: they provide understanding and certainty, they create a sense of control and security, and they improve a believer’s self-image.

All of those three needs tumble together neatly. As a rule, humans can’t abide nagging uncertainty, so any answer to a mystery — even an outrageous one — is better than none at all. With that comes a greater sense of knowledge and safety. And since that knowledge is not held— or at least believed — by most people, there is a feeling among those who do believe that they are part of a uniquely well-informed minority.

“Our basic model of people is that there’s a thin crust of rationality over a molten core of crazy,” says Joseph Parent, a professor of political science at Notre Dame University and the co-author, with Joseph Uscinski, associate professor of political science at the University of Miami, of American Conspiracy Theories. Stories of secret conspiracies, Parent says, are “emotional poultices,” cooling the crazy partly by providing a powerful sense of group affiliation.

One of the high-water marks for conspiracies, Parent and Uscinski argue, was in the post-World War II era, with nuclear weapons and the mortal divide between East and West creating a constant feeling of menace. Anything that brushed up against weaponry, the military or secrecy was a particularly fertile area for conspiracies — and Area 51 rumors do all three. What’s more, when it comes to Area 51, there was always more than a little truth to the suspicions. Even if it isn’t home to anything remotely alien, it’s still a highly secretive military base and testing site.

“In one sense it is a conspiracy, because it’s a secret area,” says David Ludden, professor of psychology at Georgia Gwinnett College. “The government actually is doing something it doesn’t want us to know about.”

The military did not do anything to put the suspicions to bed after the Area 51 event started to go viral. “[Area 51] is an open training range for the U.S. Air Force, and we would discourage anyone from trying to come into the area,” Air Force spokeswoman Laura McAndrews told the Washington Post in a July 12 story. “The U.S. Air Force always stands ready to protect America and its assets.”

That don’t-mess-with-us warning probably will discourage at least some people from showing up on Sept. 20. But if McAndrews hoped to do anything at all to quiet the E.T. rumors, she likely did just the opposite.

Also setting Roswell apart is that nearly all other conspiracy theories require some inciting incident: there were no truthers until 9/11; there were no birthers until President Obama rose to fame; it took actual moon landings before people started whispering that they were all made up. But tales of aliens have long been with us.

“These theories have been ingrained in popular culture for decades,” says Uscinski. “They are in movies, TV shows, numerous books. Even major mainstream newspapers have been running articles lately suggesting the government is covering up alien visitations.”

Then too there is an element of wish fulfillment. One of the leading reasons we send spacecraft throughout the solar system and search for Earth-like worlds circling other stars is the hope that we will find signs of life, or at least places where life could take hold. It’s an awfully lonely universe if we’re the only place where the lights are on, and there’s comfort to be had from the idea that the aliens will save us the trouble of looking for them and simply show up here instead. “It’s so much a part of the popular imagination,” says Ludden.

Imagination, alas, might indeed be all that it is — science fiction packaged up as truth for a species looking for company. Even if the Sept. 20 event happens, even if the crowds are somehow able to breach the Air Force gates, no one is actually likely to see them aliens. It’s a hard truth—and kind of a sad one, too. 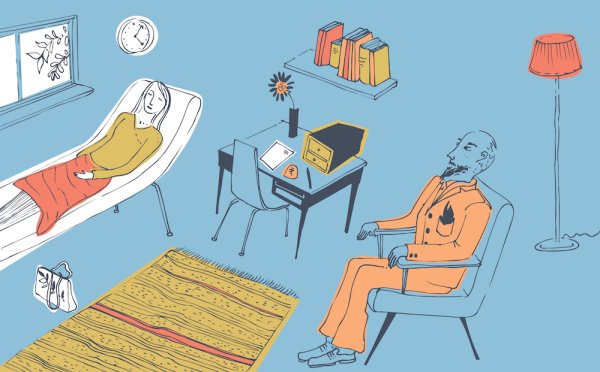 Why Some People Lie to Their Therapists
Next Up: Editor's Pick