As more than 1 million people have RSVPd to the satirical buzzy Facebook event to “raid” Area 51 and “see them aliens,” those who have tried to visit the secretive military base that’s long intrigued conspiracy theorists say participants in the event aren’t likely to see anything at all.

While some Area 51 visitors do believe that the site, near Rachel, Nevada, is home to a secret government cache of alien technology (or aliens themselves), the government says it’s an Air Force testing ground. Regardless of the lore surrounding the place that drives tourism, visitors aren’t exactly welcome.

“You can tell that they’re watching you,” says YouTuber Josh Yozura, who tried to visit Area 51 three years ago.

Yozura says the area around the gate he approached was basically a desert with fields, cows and distant mountains as far as the eye can see. Nonetheless, he could tell he was under surveillance — and he noticed guards stationed in buildings around 20 feet ahead. “They’re always watching,” he says.

Three gates lead to Area 51, according to accounts of some who visited. Beyond the guards he could see further back, nobody greeted Yozura at the entrance. Cameras surround the three gates, too, Yozura says. He could also make out the shapes of people sitting on mountains in the distance beyond the gates.

Despite his “eerie” feeling, though, Yozura says he left Area 51 with a better understanding of why it fascinates so many people. “It’s a whole big mystery, and that’s why I think we all love it so much,” he says.

John Morris, a photographer and YouTuber who approached Area 51 during a 2016 road trip, said the experience was “really cool,” but he couldn’t shake the feeling that something seemed off. “You could disappear overnight and no one would ever know,” he says. “So it’s also kind of eerie.”

When he headed up to the gates, Morris was struck by how different it was from other military bases he had visited. “It’s a gate with all these buildings [behind it], and people inside the buildings, but nobody’s standing outside. Nobody’s near the gates,” he says. Morris ate lunch at the Little A’le’Inn, a nearby restaurant and hotel, and tried to get some insight from the locals. But “they were kind of tight-lipped about the whole thing themselves,” he says. The restaurant was decked out in all manner of extra-terrestrial paraphernalia, no doubt an effort to cash in on the believers who make the pilgrimage.

For Kyle Rakutis, who made an Area 51 visit at nighttime in 2014 on a road trip from the Boston area to the West Coast, things went differently. At the Little A’le’Inn, a bartender gave Rakutis directions up a dirt road to the gates of Area 51. That’s when his visit took a turn, he says. “I’m reading the signs and all of a sudden the gates open, so I drive in, and these three military guys come out, guns drawn. As I’m sitting there, I’m kind of freaking out, because they don’t really say anything,” Rakutis says. “They just say, ‘check him out,’ and start searching my vehicle immediately.”

Rakutis says he didn’t get a good look at Area 51, which he believes was still miles beyond the gate where he says he was stopped. He noticed “flickering lights off in the distance,” Rakutis says, leading him to believe there were buildings of some kind beyond the gates. “But at that point honestly I was too scared for my life to even take a close look at it.” A guard wrote down his license plate number, sent him away and closed the gate.

Rakutis doesn’t encourage anyone to visit Area 51 — much less to “raid” it — because he “feared for [his] life” as the guards approached him. Morris, who has years of experience as a travel photographer and photojournalist, agrees that visiting Area 51 just didn’t feel right. “I travel for a living, so I’m used to getting put into different situations like that,” Morris says. “But that was something else.” 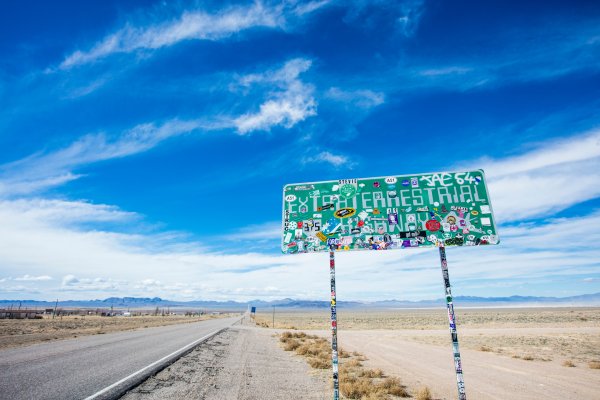 The Man Who Started the Area 51 Raid Says Things Have Gotten a Little Spooky
Next Up: Editor's Pick