Thousands Have 'Signed Up' to 'Storm Loch Ness' and Find 'That Big Boy.' Here's the History Behind the Mythical Sea Monster

The public’s fascination with “storming Area 51” has now extended to some other mysteries around the world. But the latest subject of a potential “raid” carries lore much older than the military base itself: the Loch Ness monster.

A Facebook event encouraging a raid on Loch Ness, a lake in Highland, Scotland, probably won’t result in the official discovery of the mythical monster dubbed “Nessie,” but it looks like the 21,000 people “attending” the event are still willing to try. “The time is now for us to find dat big boi,” the event description says.

It’s certainly not Nessie’s first rodeo — believers have been wondering whether or not this mythical Scottish monster exists in Loch Ness for centuries. TIME even included an infamous 1934 photo of what appeared to be the monster in its 100 Photos project, which collected the world’s most iconic and important pictures. “The Loch Ness image is something of a lodestone for conspiracy theorists and fable seekers,” according to TIME’s entry on the photo. So it’s no surprise that this resurgent interest in Loch Ness has arrived in the wake of the internet’s Area 51 obsession.

Before you want to check out the scene for yourself and try to crack the case once and for all, get to know the history behind this legend, from a Roman discovery to a false photograph in a London newspaper. Here’s everything to know about the history behind the move to “storm Loch Ness“.

What’s the latest with the Loch Ness monster?

Ever since a satirical Facebook event encouraged a raid on the Air Force base that some claim may hold extraterrestrial research (and aliens), and almost two million Facebook users indicated their desire to attend, people have naturally made similar efforts with the myth of Loch Ness. A Facebook event entitled “Storm Loch Ness” encourages believers to check out the Scottish spot because “Nessie can’t hide from us all,” playing off the Area 51 event’s title, “Storm Area 51, They Can’t Stop All of Us.

Though it’s clearly a joke — the Area 51 instigator has said his event was 100 percent satire created for the memes — the British government isn’t ruling out the possibility of visitors storming this legendary lake. Joking that though it’s less dramatic than raiding a U.S. military base, a spokesperson for Royal National Lifeboat Institution (RNLI), which keeps a watchful eye on the lake, told the BBC in a statement that they have their “own set of problems.”

The spokesperson added that visitors need to be very careful at this typically frigid destination and that the RNLI’s lifeboat isn’t big enough for this many people. “Our Atlantic 85 lifeboat has an impressive survivor-carrying capacity, but even that will be stretched by the ‘attendees’ of this event,” the spokesperson said, according to the BBC.

When did the legend of the Loch Ness monster start?

A view of the 'Loch Ness Monster,' near Inverness, Scotland, April 19, 1934. The photograph, one of two pictures known as the 'surgeon's photographs,' was allegedly taken by Colonel Robert Kenneth Wilson, though it was later exposed as a hoax.
Keystone—Getty Images

This legend and myth can be traced all the way back to the first century A.D., when Romans arrived in Northern Scotland, according to PBS’ science series, NOVA, and saw the Pict tribe’s depictions of an unrecognizable animal. Romans described this animal as “a strange beast with an elongated beak or muzzle, a head locket or spout, and flippers instead of feet,” writes PBS science filmmaker Stephen Lyons in his history of the creature. It’s not the only monster to capture Scottish imaginations: local folklore had a long relationship with bodies of waters concealing huge animals, Lyons wrote.

The first literary mention of a beast hanging out in Loch Ness was between 500 and 650 A.D. “Delightful would it be to me to be in Uchd Ailiun … Over the watery ocean; That I might see the sea monsters,” it says in Saint Adamnan’s biography of the Scottish Saint Columba.

That story goes on to mention that Saint Columba used the “power of god” to cast away the monster in Loch Ness. In his 1974 book The Loch Ness Story, Nicholas Witchell also found other references to big creatures living in the lake.

But then Nessie went global in 1933 when a local newspaper, the Inverness Courier, ran an article with an eye-witness account of a couple who had seen a big “monster” in Loch Ness. This spurred an obsession with the creature throughout Britain and beyond. Witchell estimated in his book that thousands of people came forward with claims of having seen Nessie with their own eyes after that story’s publication. (NOVA has collected some current stories online.)

But in 1934, the real story began when the Daily Mail published published a photograph of the “monster” on its front page. It was dubbed the “surgeon’s photo,” because it was allegedly sold to the Mail by a physician, Robert Wilson, according to TIME’s 100 Photos project. The infamous and (perhaps original) viral image was later revealed as a fake in the 1990s, but the lore of this spooky lake monster hasn’t subsided.

Steve Feltham, who has spent close to three decades watching the Loch Ness for a sighting of the monster, according to his blog, conceded in 2015 that the “monster” that people claim to have spotted is likely just a large fish. In an interview with The Times of London, Feltham said he doesn’t “regret” the time he’d spent waiting for Nessie. But he does believe she’s just a Wels catfish, a native fish that can grow up to 13 feet long, Reuters reported.

Despite Feltham’s assertion, the Smithsonian Museum of Natural History says the Loch Ness monster is one topic it’s questioned on the most, though it doesn’t have a scientist on staff who is specifically focused on Nessie. But that doesn’t mean the museum has pushed Nessie to the side. “To date, the actual existence of a monster in Loch Ness has not been proven. Even though most scientists believe the likelihood of a monster is small, they keep an open mind as scientists should,” the Smithsonian’s encyclopedia says, “and wait for concrete proof in the form of skeletal evidence or the actual capture of such a creature.”

Can you swim in Loch Ness?

No. You really cannot swim in Loch Ness. According to Visit Inverness Loch Ness, which organizes tours of the area, swimming directly in the loch is dangerous in any season due to an annual average water temperature of 5 degrees Celsius (41 degrees Fahrenheit). “Apart from the small matter of Nessie lurking deep beneath the surface, the water is bitterly cold all year round,” the organization says on its website. “In these low temperatures, you will quickly get hypothermia.”

So, though you may or may not encounter the monster itself, it’s best to steer clear of these frigid waters anyway.

But there are other shallow spots nearby, like North and South Loch Ness, that are much warmer than the deep waters of the loch itself. Visit Inverness Loch Ness recommends swimmers find Loch Beinn a’ Mheadhoin, Loch nam Bonnach, Loch Duntelchaig and others for enjoying the water.

What can you do when you visit Loch Ness?

Though you’re probably not going to spot the monster, Loch Ness is still a beautiful place to visit. Despite the chilly temperatures of the Scottish vacation spot, Loch Beinn a’ Mheadhoin, a beachy national reserve, is a nice nearby spot for a picnic lunch. But Scottish weather is typically rainy and misty, so definitely make sure you’re visiting in a moment of good luck and breezy temperatures.

To learn more about the Loch Ness monster and its history, you can visit the Loch Ness Centre in Drumnadrochit, a village right by Loch Ness. Tourists can also explore the Urquhart Castle, which is right next to the lake, and see some glorious views from its tower. 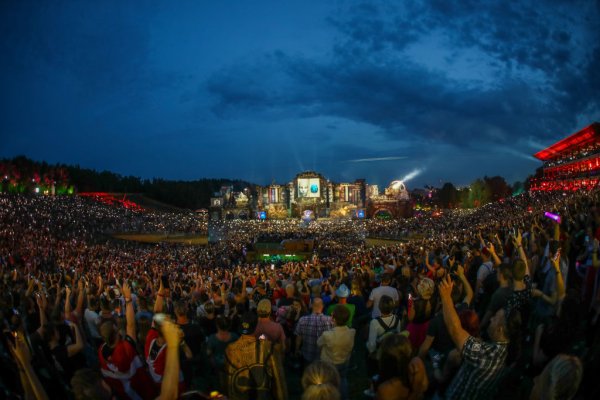 Even Basketball Stars Like Shaq Enjoy Moshing in the Crowd
Next Up: Editor's Pick