Woodstock 50 Was Just Canceled. Here's Everything to Know About the Ill-Fated Festival

Fifty years ago, a festival took place in Bethel, New York, that would live on forever in the American imagination. The Woodstock Music and Arts Festival of 1969 defined the era of hippiedom, often seen as the pinnacle of rock ‘n’ roll and free love, featuring superstars like Jimi Hendrix, Janis Joplin and Santana. Five decades later, one of its original organizers wanted to pay tribute with Woodstock 50, a festival bringing together a host of musical acts both old and new to celebrate the weekend’s 50th anniversary and its promises of peace, love and music.

Since its announcement in the spring, Woodstock 50 has been fraught with organizational and planning issues and controversies. It’s not the first attempt to reboot the Woodstock Festival with poor results: Woodstock 1994, which celebrated the event’s 25th anniversary, was plagued by bad weather and overcrowding, earning it the nickname Mudstock. The similarly over-subscribed Woodstock 1999 was dogged by allegations of sexual assault and crowd misbehavior, and its rampant corporate sponsorships and high ticket prices left a bad taste.

Woodstock 50, helmed by the original team, was supposed to be different. Yet just two weeks out from the event, it appears to have been canceled altogether. Here’s what’s happened to the plans for Woodstock 50 since it was announced earlier this year.

When was Woodstock 50 supposed to take place?

Up until July 31, the plan was for Woodstock 50 to take place Aug. 16-18, 2019 — the same weekend in August as the original Woodstock, which took place Aug. 15-17, 1969 in Bethel, New York. The location set for Woodstock 50 changed multiple times due to permit issues for the event, with New York state options ultimately scrapped. But eventually the organizers landed on the Merriweather Post Pavilion in Columbia, Maryland.

Yes. On July 31, Variety confirmed that the festival is canceled. “We are saddened that a series of unforeseen setbacks has made it impossible to put on the Festival we imagined with the great line-up we had booked and the social engagement we were anticipating,” Michael Lang, a co-creator of the original Woodstock, shared with Variety. He cited “conflicting radius issues in the D.C. area” and acts who pulled out “for their own reasons.” Since Lang says that all acts were fully paid, however, he encouraged the artists to donate 10% of their fees to the nonpartisan voter registration charity partner HeadCount “or causes of their choice in the spirit of peace.”

He continued: “Woodstock remains committed to social change and will continue to be active in support of HeadCount’s critical mission to get out the vote before the next election. We thank the artists, fans and partners who stood by us even in the face of adversity. My thoughts turn to Bethel and its celebration of our 50th Anniversary to reinforce the values of compassion, human dignity, and the beauty of our differences embraced by Woodstock.”

There had been confusion about whether or not Woodstock 50 would happen back in April 2019, when one of the event’s backers said it was canceled. The organizers insisted it was not, and a series of back-and-forth claims about mismanagement and permit issues ensued. As of late July 2019, the festival was still on, however — just relocated to Maryland and with a revised lineup.

That lineup never materialized, and it was ultimately canceled just two weeks away from its scheduled date.

Why was Woodstock 50 not planned to take place in Woodstock?

Woodstock 50 planned to hold the festival in upstate New York as well, first at Watkins Glen International racetrack and then at Vernon Downs after Watkins Glen cancelled the contract, citing a missed payment. But Woodstock 50’s attempt to secure permits for Vernon Downs failed, even after multiple appeals. So the organizers relocated to the Maryland event space before the festival’s ultimate cancellation.

The festival was pitched by Lang and organizer Gregory Peck with the assistance of financial backers. Lang also announced he had joined with the charity HeadCount, collaborating to raise funds in their get-out-the-vote efforts, as well as partnering with NGOs fighting climate change.

What were the original plans for Woodstock 50?

Originally, Lang envisioned a festival that would match the spirit of the first one in 1969, welcoming 150,000 attendees to the Watkins Glen race track in upstate New York. The lineup was stacked with artists old and new, from Jay-Z to Halsey to Dead & Company.

What was the original Woodstock 50 lineup?

Headliners announced initially in March 2019 included bands like The Killers, Dead & Company, Imagine Dragons and Portugal. The Man, with solo acts like Jay-Z, Miley Cyrus, Maggie Rogers and Chance the Rapper. It was an eclectic mix of artists across genres, some of whom had even originally been at the first Woodstock. Also listed: the Raconteurs, the Black Keys, Janelle Monáe, Brandi Carlile and more.

But on July 26, just after Woodstock 50 confirmed the location change to Maryland, all the artists that remained on the lineup were officially released from their contracts, Billboard reports. A number of them had already pulled out earlier in the spring and summer, too. As of July 29, the venue relayed to media outlets that they had yet to see a finalized lineup — but confirmed that the space was still being held for Woodstock 50. “As our celebration evolves, we are committed to bringing unique voices to the stage,” the festival’s website explained at that time. “Stay tuned for updates as we strive to create an event rooted in peace, love and music that can be a force for positive change in the world.”

What will happen instead of Woodstock 50?

There are no longer tickets for sale online. Just a few days prior to cancellation, Rolling Stone had confirmed with Merriweather Post Pavilion on July 29 that the potential tickets would be one-day passes and would be complimentary. (The venue holds about 32,000 guests; originally, the Woodstock 50 organizers were hoping for a 150,000-person festival.) But if anyone shows up at Merriweather Post Pavilion on Aug. 16 or 18, it will be to an empty venue. (On Aug. 17, the Smashing Pumpkins are booked to perform their own show, completely separate from Woodstock 50.)

So what do I do to celebrate instead of going to Woodstock 50?

Don’t lose hope! The town of Bethel is holding its own tribute to Woodstock this year, also taking place Aug. 15-18, on the same fields on which the original festival was held. The Bethel Woods Center for the Arts has a planned weekend of activities on site, and the nearby Museum at Bethel Woods has special exhibits on Woodstock history. But if you’re going for the music, rest assured that Bethel has already booked talent: Arlo Guthrie, an original Woodstock performer, will be on hand on Aug. 15 exactly 50 years to the date of his original show for a sold-out event. Over the rest of the weekend, former Beatle Ringo Starr and his band, Carlos Santana, the Doobie Brothers, John Fogerty of the Creedence Clearwater Revival, the Tedeschi Trucks Band and Grace Potter are also slated to perform.

The original version of this story misstated the date that Arlo Guthrie will perform. It is Aug. 15, not Aug. 16. 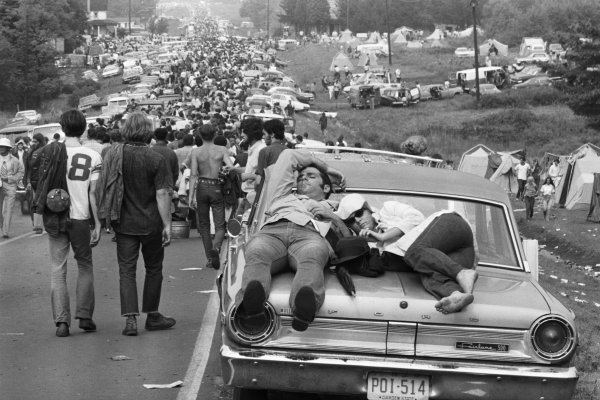 What Archeologists Found at the Woodstock Farm
Next Up: Editor's Pick